Although it was likely He-Man and the Masters of the Universe (1983 – 1985) that captured fully the imagination of young fantasy audiences in the early 1980s, I have always boasted tremendous affection as well for another genre piece of roughly the same age: Thundarr the Barbarian (1980 – 1982).

This NBC Saturday morning series was created by Steve Gerber of Howard the Duck fame, and featured production design from Jack Kirby and Alex Toth. Produced by Ruby-Spears, Thundarr the Barbarian, according to its opening narration, involves “savagery, super-science and sorcery.”

The premise of the series is that in the far-flung year of 1994, a runaway planet passes between the Earth and the moon, destroying man’s civilization virtually overnight.  The opening credits of the series are very picturesque, and reveal the moon shattered in two, and volcano lava encroaching on imperiled urban areas. 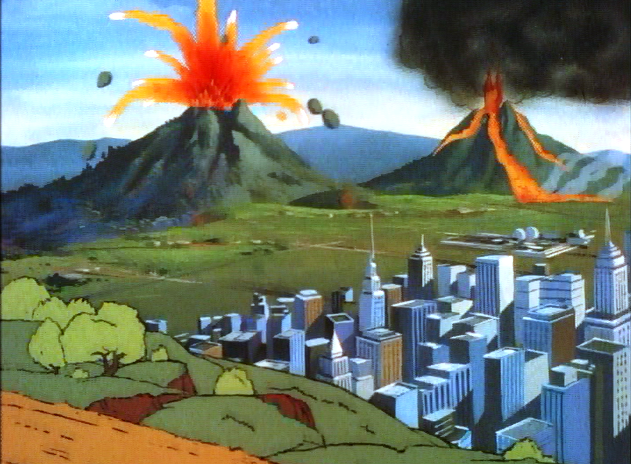 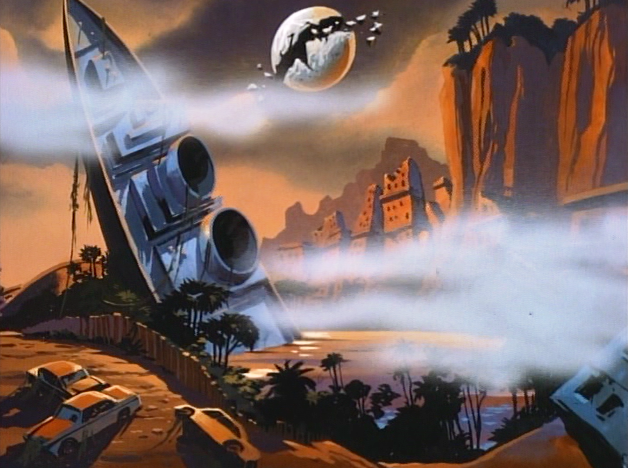 Two-thousand years later, a new world has arisen from the ashes, one of monsters, mutants, barbarians, and even heroes like Thundarr.  This great hero (another descendant, no doubt, of Howard’s Conan…) carries a special high-tech weapon called a “sun sword” which, like a light-saber, can retract into a special hilt.  Thundarr wears that sword hilt on a wrist gauntlet for easy access in times of strife.

Thundarr -- “a barbarian who fights like a demon” – also travels with two companions.  The first is the beautiful Princess Ariel, who boasts a working knowledge of pre-apocalypse times, as well as relics of that long-gone age such as “movies.”

The second companion is a growling, Wookie-esque friend named Ookla.  He’s a creature called a Mok (amok, get it?) and a loyal friend as well. 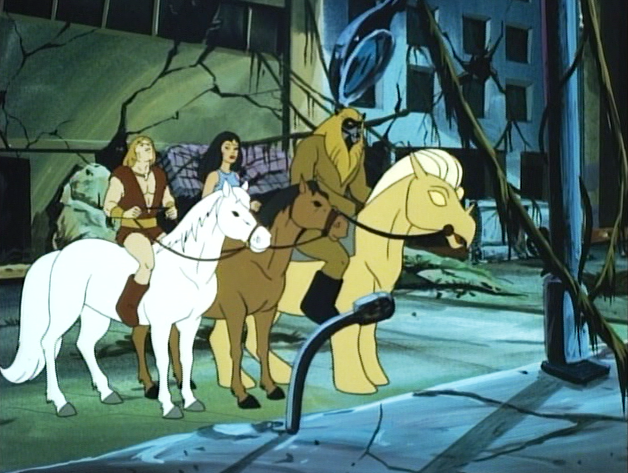 These three warriors ride together through the ruined and dangerous landscape, and battle many different colorful villains, including Groundlings (humanoid rat creatures), powerful wizards, and lizard people too.  Thundarr’s journeys often take him inside the ruins of ancient cities, where danger and intrigue await. Over the course of the series, he sees Manhattan, Washington D.C., Las Vegas, San Francisco, and London.

In Thundarr The Barbarian’s first episode, “Secret of the Black Pearl,” Ariel, Ookla and Thundarr rush to the aid of a “courier of the black pearl,” named Tyron.

Tyron has been attempting to keep the mystical black pearl out of the hands of a deadly wizard named Gemini.  He was en route to the ancient city of “Manhat” (Manhattan…) when intercepted by Groundlings.  He had planned to deliver the pearl to the defenseless humans living in the ruins of old New York…

Now Thundarr assumes that mission, but faces the minions of Gemini, who are hell-bent on stopping delivery of the pearl. 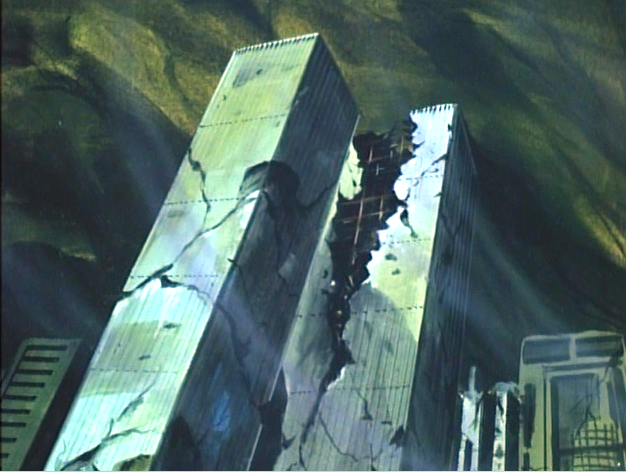 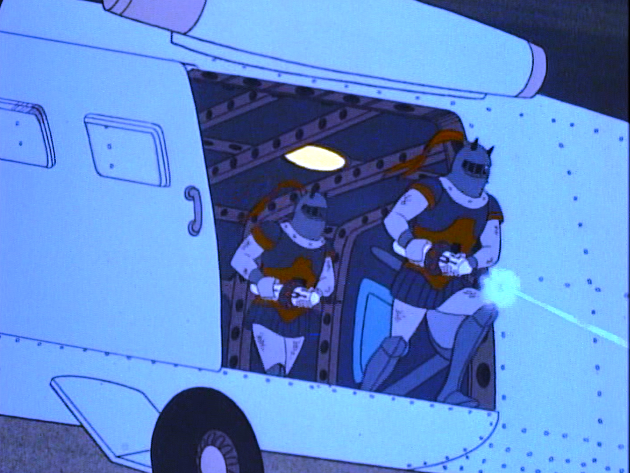 In one of the first episode’s finest visual inventions, we see the sword-carrying knights of Gemini jump from a hovering helicopter to attack Thundarr and his friends on the ground below.  This image is a perfect conjunction of sorcery/super-science/savagery, and fits in beautifully with the “apocalypse mentality” of the 1980s, a philosophy seen in films such as The Road Warrior (1982), Warriors of the Wasteland (1983) and Defcon  4 (1985).   Here, the ancient helicopter has been re-purposed as the weapon of primitives who would have no idea, even, about its construction centuries ago.

The latter half of “Secret of the Black Pearl” involves Thundarr, Ookla, and Ariel battling Gemini in the ruins of Manhattan, and there are many impressive frames of the ruination.  Humorously, we also see a poster for Jaws 9, at one point. 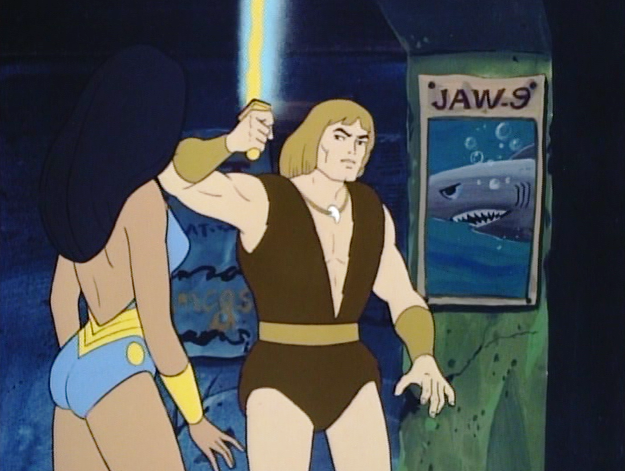 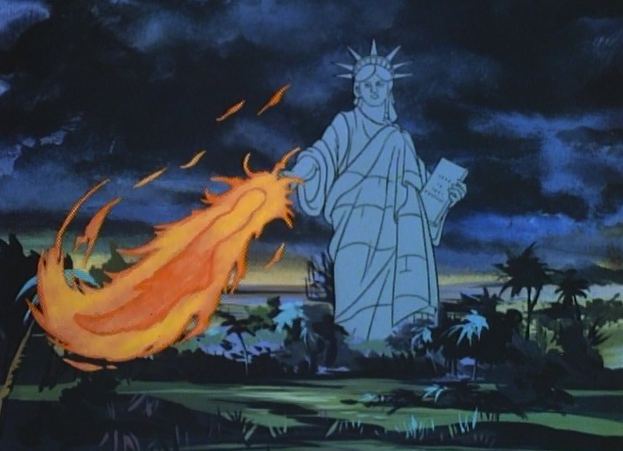 Later, Gemini utilizes his evil magic to bring the Statue of Liberty to terrifying life (a moment that forecasts the Weeping Angel Statue of Liberty in the new Doctor Who), but Thundarr is able to vanquish the monstrosity by using Gemini’s pearl against him.  Uniquely, even the visual appearance of Gemini is one with some relevance to new Who.  Gemini boasts two faces: a human, normal one, and a grimacing monster one.  The faces rotate to prominence. This facet of the character reminded me a bit of the Smilers/Winders in the Who serial “The Beast Below.”

Overall, “The Secret of the Black Pearl” is a pretty straightforward fantasy adventure, with elements of the productions I have listed above, as well as Star Wars, and Beneath the Planet of the Apes.  I find the series generally inventive, in part, because it couches its premise of apocalypse in terms of being an accident or disaster, rather than the result of nuclear war.  That was likely a necessity for Thundarr getting a billet on the Saturday morning schedule.

But clearly, Thundarr the Barbarian is a kid’s version of much of the adult entertainment of the era, focusing on the end of technological civilization, and what might come next, after the fall of man.