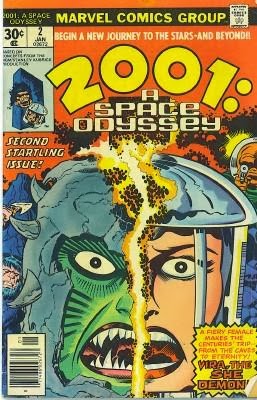 This is a comic-book I collected as a kid, the short-lived 2001: A Space Odyssey series “based on concepts of the 1968 MGM movie by Stanley Kubrick and Arthur C. Clarke.”

Just imagine attempting to capture the age-spanning awe and majesty of 2001: A Space Odyssey every month, and you get an idea of what height this comic aspired to reach.

In particular, I’m remembering issue # 2, from January of 1977, written, drawn and edited by the great Jack Kirby.

In this “startling second issue” of a comic that urged readers to “begin a new journey to the stars - and beyond,” we are treated to the fascinating tale of “Vira, the She Demon.” The story begins in prehistoric Italy - a land dotted by live volcanoes - as Vira, a “non-submissive female” in the words of Kirby, attempts to survive in a totally inhospitable environment. She is dying of starvation until she encounters the Monolith. This strange alien tool/being imbues her with the knowledge of “fear,” and she hence sets herself up as the fierce She-Demon Goddess of a local tribe. Terrified of this pretend-God, the tribe's men house Vira and hunt game for her, and in return she leads them with wisdom...forming mankind’s first government.

Fast forward to the 21st century and we meet astronaut Vera Gentry, of Explorer Unit 5, now stationed on Ganymede. A race of vicious alien hunters destroy her life support and shelter, and like Vira the She Demon so long ago, she flees, only to encounter the Monolith.

This time, the Monolith whisks her off into a world of her own (just like David Bowman’s sitting room in the movie). In her own environs, including a swimming pool she once owned, Vera Gentry ages to 102 years old before ultimately transforming into a Star Child, a so-called “New Seed.”

And yes, this is trippy (or ultimate-trippy....) stuff. It was an audacious move to begin a comic-book line based on a film that had few characters survive, little dialogue, and which jumped from time-period to time-period with regularity, but I wager Jack Kirby was just the talent to do it. This issue apes 2001 by starting at the “dawn of man,” (like the film...) leaping to the year 2001 (like the film...) and then on and beyond into the “future of man” - just like the film. The enigmatic black Monolith, as one can tell from this summary, is a key player, a catalyst, and agent of transformation.

Apparently, it wasn’t long before Marvel's editors realized this brand of story was going to be awfully difficult to sustain every issue. I mean, how many times can you repeat the same tale the Kubrick movie covered so well? The anthology format essentially meant there was nothing recurring for comic-readers to latch onto each month except....philosophy and the general concept.

Therefore, in later issues, such as the final one, number # 10, Kirby went in new directions, focusing on a character named “Mister Machine,” and avoiding the Monolith. In the "Monolith Mail" page of that book, the editors wanted to gauge reader response. Should they focus on Mister Machine as a central character or continue the anthology format?

Alas, we'll never know where the comic-book might have finally gone...

So why remember Kirby’s 2001: A Space Odyssey comic today? Well, first of all, it was daring. This wasn’t Star Wars where you could take Luke Skywalker to a water planet one issue, then team him up with a giant green bunny for a pastiche of The Magnificent Seven the next. Kirby’s take on 2001 was a bold idea that relied on the notion that fans would be interested in genuine science fiction stories, even ones not held together or connected by recurring characters.

Also, I remain incredibly fond Kirby’s unique art design (which is also evident in Thundarr the Barbarian, which I'm reviewing on Saturdays...) Why hasn’t some clever filmmaker faithfully adapted his style to cinema? His concepts and designs are inherently cinematic, and totally different from anything we’ve yet seen captured on the silver screen. Anyway, that’s another story. Here, I would simply suggest that Kirby’s comics accurately captured the nature of the 2001: A Space Odyssey universe (with a nod to Marvel’s Watcher thrown in too...), and I wanted to champion the accomplishment.

After all, 2001 is an odd and beautiful film, one with a minimum of talking, but  remarkable imagery. We all remember the scene where an ape-man in the past throws a bone into the air and we leap forward to a bone-shaped orbital spaceship, right? Well, Kirby constantly presented panels like that in the comic-book, leaping us from century-to-century with the same kind of visionary touch. Original? No, it was Kubrick’s imagination translated to a comic, but it was translated in intriguing fashion nonetheless, and Kirby’s art certainly made it feel original, that’s for sure.

So let’s hear it for doing something bold and different. It’s easy to do a Star Trek, Star Wars, or Battlestar Galactica in comic form, but 2001: A Space Odyssey? That’s a crazy notion, but "Marvelous Marvel" has been there and done that.
at January 31, 2014

Email ThisBlogThis!Share to TwitterShare to FacebookShare to Pinterest
Labels: 2001: A Space Odyssey, comic-books, From the Archive