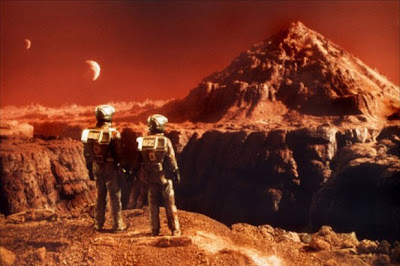 Reader and film expert Cannon returns this afternoon with another incredible list regarding our Reader Top Ten topic of the month. SF Film Endings.

Natasha Henstridge is awoken in her hospital bed by intercom alert and the sounds of Martian zombie chaos. She stands up, half naked, dresses. Ice Cube busts open the door, throws her a submachine gun. The two stroll down the corridor together:

They look at each other; simultaneously: "Nah."

I know, I know ...this one is none too popular amongst fans of the original, but I’m a sucker for it. I dug the unexplained holographic pixelator and Kate Lloyd’s final act of survival soon followed by her on implied (and logical) demise. And I love how it blends into the next film -- the first film -- shot for shot.

Taking the final step, by climbing the last rung, Thex alters his own reality once and for all, leaving the subterranean dystopia behind and breaching the surface of a new world; standing alone before an epic sunset. A powerful message if there ever was one.

Starting with Ma-Ma's subversively tranquil destruction, the next and last scene of the film sees Dredd pass a cadet and shrugs off a night's worth of near-death slum war like it was just another day at the office. Anderson was practically shattered and rebuilt, with a whole new outlook. But Dredd? Nothin' ...the same after Peach Trees as he was before. The dude doesn't even go home for a nap. He just rides his bike back into the city, looking for lawbreakers.

"Otto, don’t go. What about our relationship?"

"What about our relationship?!"

And with that, Otto steps into the passenger seat of a glowing green 64 Chevy Malibu and flies off into the night skyline of L.A., zigzagging left and right, before flying off into outer space. Think of it as a more honest, less bullshit version of the ending to Close Encounters.

The ending to The Road Warrior might have mythologized Max, but it’s the first film that closes with our antihero, beat to hell and loosing blood, simply driving away from the last remnants of civilization on into a rain soaked blur of delirium. His family is dead. Their murderers are dead. Justice gave way to vengeance; vengeance now ringing hollow. Nothing matters anymore. Just keep driving. No myth for Max, only madness.

Yeah, this one’s pretty obvious. A given. You almost can’t beat a noir ending. I’d like to think there’s something more to the 'is-he-or-isn't-he?' question of Deckard’s true nature, that he is in fact human but nonetheless haunted by dreams that are not his own; dreams implanted from who knows where and by some unknown agent; a whole other story aspect of this future world yet to be revealed, perhaps to which Gaff is only privy.

Another given for such a list. Not much to say about it that hasn't been said already. Did critics really harp on the ending of this film at the time of its release? Retards. Though, now, I can’t help but wonder if, not long after the fade-out, Kate happened upon the two men, half-dead herself ...or worse.

This one is kind of a hard to explain as there is nothing particularly monumental about the film’s ending. It simply ends. Yet, there is a bitter sweetness to it. The nightmare will only continue for Ripley in the following sequels as a spreading cloud that will gradually eradicate her once relatively normal life. But here, at the closing of the fist film, when it was still the only film, the horror in its most singular form is blasted away into the vacuum of space and our lone survivor frets not over the chances of rescue, as she is simply relieved to be alive. And we share that relief with her: the nightmare truly feels over as Ripley signs off and drifts into peaceful hypersleep while her escape shuttle, free and unmolested, drifts wayward. As the excerpt from Howard Hanson’s Symphony No.2 ("Romantic") begins, the notion is hinted that perhaps not all in the universe yet discovered by science bears ill-will to mankind; that, tonally, like the serene moment our Nostromo crew first emerges from their cryotubes, there is indeed something miraculous about being out there among the stars.

The story concludes with Quaid:

a.) On Mars, having experienced the events for real.
b.) Waking up back in Rekall from his intricately plotted Ego Trip.
c.) Lobotomized.

Not to go into detail here, but multiple narrative and cinematic clues indicate that c.) is the most likely outcome. Too bleak, you say? Not really. Think about it for a moment ...it is Quato who tells Quaid, "You are what you do. A man is defined by his actions, not his memory." If it was all a dream, if the bright sun that whites out the screen in the closing shot is in fact Quaid’s sentient mind being cast forever into oblivion, so what? Consider his final memory an ode to the ultimate masculine fantasy: a lurid, Martian spy adventure rife with ultra-violence and weird alien shit that ends with the hero getting the girl and freeing an entire planet. The memory of a lifetime, indeed.

Cannon: I love your list, which is no surprise, considering that our film tastes aren't very divergent, overall.  I'm especially glad to see a personal favorite of mine, Ghosts of Mars (2001), make the cut. Also, it's nice to see that recent masterpieces, such as Dredd (2012) aren't being shunned from these tallies.  I also dig your speculation about the next chapter of The Thing (possibly), with Kate coming across Mac and Childs, and all hell likely breaking loose!