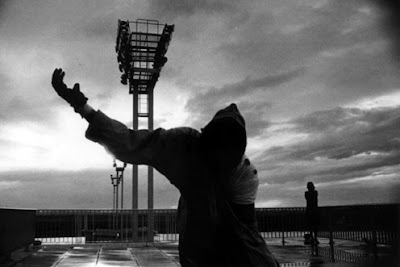 Regular reader Brian O’Rourke offers his list of the top ten science fiction film endings below to close out the afternoon.

“10 - DR. STRANGELOVE, OR HOW I LEARNED TO STOP WORRYING AND LOVE THE BOMB: "Mein Führer! I can walk!" And with that, the world ends in a montage of nuclear annihilation. A gem of an ending.

9 - THESE ARE THE DAMNED – Why is Joseph Losey’s movie barely acknowledged by science fiction fans today? It’s a downbeat classic of the ‘60s, with a surprisingly violent conclusion and an ending completely devoid of hope. “Someone help us! Please help us!” (Not to be confused with CHILDREN OF THE DAMNED)

8 - DONNIE DARKO – Richard Kelly’s mind twister of a movie ends with a heartbreaking but redemptive fatality. There are so many challenging ideas throughout this movie (12 years later I’m still trying to decipher some clues), but we never lose our human connection to these characters – especially Donnie, brought to life by Jake Gyllenhaal.

7 - ALIENS – Ripley vs. the alien queen, an epic battle. I prefer ALIEN to any of its sequels and think that James Cameron is cursed with a tin ear, but there’s no denying the sheer cinematic catharsis this scene provides. It’s so great an ending I can almost forgive Cameron for AVATAR. Almost.

6 - THE THING – An hour and 45 minutes of shocking suspense and carnage ends with a whisper: Two men, exhausted and distrustful, sit facing each other over a crackling fire. Ingenious.

5 - INVASION OF THE BODY SNATCHERS (1956) – The 1978 remake is a classic that sports its own unforgettable ending, but Don Siegel’s 1956 original ends in true paranoiac fashion, our hero begging an apathetic public to open its eyes. Kevin McCarthy’s "They're here already! You're next! You're next!" scared the hell out of a few generations.

4 - PLANET OF THE APES – It’s a visual cliché today, but wow!, Lady Liberty buried in the sand was a shock and a thrill for me, not yet a teenager, the first time I saw this movie. One of cinema’s indelible images. (I love that MAD MEN used this scene in a recent episode: Don Draper takes his son to see PLANET OF THE APES at the theatre, and they’re both so riveted they decide to stay for a second viewing.)

3 - CLOSE ENCOUNTERS OF THE THIRD KIND – The appropriate science fiction ending for any fan: In a visually, aurally and emotionally stunning finale, Roy Neary finally meets the visitors who have haunted him for so long and accepts an invitation to join them on what is sure to be an amazing journey. I’ve seen this movie countless times and the tears still well up.

2 - THE INCREDIBLE SHRINKING MAN – Scott Carey shrinks so small as the movie ends, feels his body “dwindling, melting, becoming nothing.” He makes his peace with the vast universe and accepts whatever awaits him. “I still exist,” he proclaims. This is one of the finest science fiction movies ever made, and the shrinking man’s final words turn his tragic end into a story of hope and humanity.

1 - LA JETEE – Though it’s only 28 minutes long and made of still photographs, Chris Marker’s 1962 film is one of my favorites, and the haunting, inevitable and endlessly copied ending is simply perfect. This was remade in 1995 by Terry Gilliam as 12 MONKEYS, which is also very, very good."

Brian: your list is a terrific one, and adds at least one more title I wish I had thought to include: Dr. Strangelove.  Also, it's great to see The Incredible Shrinking Man and Close Encounters getting their due on these tallies as well...
at July 20, 2013