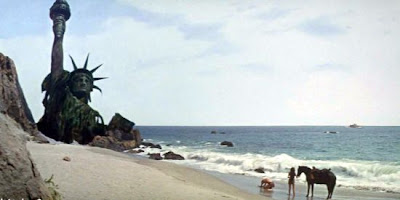 "1. PLANET OF THE APES: Arguably THE most iconic image at the end of any science fiction film. It is also a mind-blowing twist as you realize where Taylor has been all along and that all his hard work trying to get back home as been for naught. I remember being completely shattered by this the first time I saw the film. And even after you know how it ends, it still resonates.

2. 2001: A SPACE ODYSSEY: A truly transcendent, awe-inspiring way to end one of THE epic science fiction films of all time. Really, how else could have Stanley Kubrick ended his film? I like how his reveal (if you can call it that) of the aliens is something that Bowman can't even comprehend, which is always what I thought it would be like. Not E.T. or CLOSE ENCOUNTERS OF THE THIRD KIND, but in some form that we would be beyond anything we had ever experienced.

3. ESCAPE FROM NEW YORK: Interesting to see so many people list ESCAPE FROM L.A., but, let's face it, without this film to pave the way there'd be no sequel or ending that feels like a bit of rehash no matter how cool it is. Maybe it's everything that preceded it. EFNY doesn't have that problem because it came first and all the action that led up to that moment feeds into what Snake does and makes it so satisfying as he sticks it to The Man. Snake hasn't compromised his character one iota and remains true to who he is. You gotta respect that.

4. THE THING: John Carpenter has real knack for endings to his film and on a given day I'd flip flop this with EFNY. After a film full of paranoia and dread how else could it have ended? You are never quite sure who if either one of them is the alien and every time I watch it I have a different theory. So, ending it the way it does makes perfect sense as it leaves it up to the viewer to speculate. In this respect, THE THING feels like a holdover from '70s nihilistic cinema with its decidedly downbeat ending. No wonder mainstream audiences hated the film.

5. INVASION OF THE BODY SNATCHERS: The Phillip Kaufman version is fantastic and ending is one of the many reasons why. Made during the age of Nixon and Watergate, this take is appropriately cynical and rife with paranoia yet still manages to recreate the heartbreak of our protagonist revealing his fate in a tense, horrific moment. That last image still haunts me.

6. THE ROAD WARRIOR: A fantastic, mythic way to ending things for a mythic tale of the lone gunslinger, warrior of the wasteland. It is a haunting image and leaves you imaging Max still out there, wandering the wastelands, looking for fuel and for his humanity, a scrap of which was restored when he saved the colony from Humongous and his bandits. On a stylistic level, it is also bookends the way the film began.

7. BRAZIL: As someone else pointed out on their list, "The happy ending was all a lie." How wonderfully put! It's a powerful, cinematic punch to the gut that leaves you rattled as you realize that Sam didn't get away, but at least he has escaped into his mind. Small comfort, I know, but the alternative is much grimmer.

8. STAR WARS: The feelgood ending of all ending as the Rebels are victorious and the Empire has been temporarily vanquished leaving everyone feeling upbeat and happy as John Williams' rousing score takes you out.

9. DONNIE DARKO: Another fantastic twist ending that resonates in a haunting way as you Donnie sacrifices himself so that those he loves and cares about can live, whether they know it or not. But those last lingering looks suggests that maybe there is some residual sense memory that lingers.

10. STAR TREK II: THE WRATH OF KHAN: By the end of the film you really feel like you've been on a journey with these characters - that you've seen them at their best and at their worst and they've come out the other side. Kirk experienced some hard-learned lessons and you really get a sense of what friendship and loyalty mean to these people, that one of their own was willing to sacrifice himself for the greater good, and the voice-over intoning those iconic words..."

This is a great list, and I love all the choices, for the reasons J.D. so skillfully and eloquently enumerates.  If we are drawing any inferences about final results, it looks like Star Trek II, Donnie Darko, more than one John Carpenter film and Planet of the Apes are certainly looking strong.

Don't forget to send me your lists before the weekend at Muirbusiness@yahoo.com
at July 18, 2013