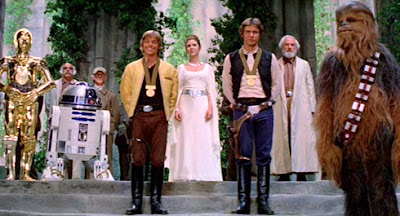 Writer and reviewer Darren Slade, of the new (and highly-recommended...) blog Episode Nothing: Star Wars in the 1970s, contributes our first reader's list of the day.

1. Star Wars (1977)
Our heroes have penetrated the enemy fortress, rescued the princess, got back to their spaceship and fought their way free. That would be a satisfying enough ending for most movies. In fact, when I saw the film at the age of 10, I thought that was the ending. It was a great ending, too. I just wished the whole thing could have gone on a little longer.

In my excitement, I'd forgotten that the Rebels still had to deal with the small matter of blowing up the Death Star. What followed were 20 of the most exciting minutes of film ever. And however many times I see it, I'm still surprised when Han Solo flies out of the sun. The medal ceremony, with its rousing music, caps the adventure perfectly.

2. Beneath the Planet of the Apes (1970)
OK, so the original film has the brilliant twist ending, but everyone picks that one. The sequel has the end of the world as an ending. The director hated it. The star hated it. It wasn't the ending the screenwriter had wanted, but he was under orders to bring the franchise to a permanent end. It still astonishes me that a big, studio-backed film could end in so bleak a fashion.

“In one of the countless billions of galaxies in the universe, lies a medium-sized star, and one of its satellites, a green and insignificant planet, is now dead.”

3. E.T. The Extra-Terrestrial (1982)
A chase scene which is the perfect synthesis of action, editing and music gives way to a farewell which is not exactly surprising but completely satisfying emotionally. And kudos to effects man Dennis Muren, who came up with the inspired idea of having E.T.'s spaceship leave a rainbow in its wake.

Superman is faced with two nuclear missiles exploding simultaneously in two parts of the US. He's stopped one, but the fatalities caused by the other include Lois Lane. Distraught, Superman disobeys his birth father's number one rule and interferes with human history by turning back time.

How does that resolve the problem when he still can't prevent two nuclear explosions at once? I still can't work it out, yet we're caught up with it because it's emotionally satisfying, and we cheerfully overlook the gaps in logic.

5. Sleeper (1973)
Certainly the funniest ever ending to an SF movie.

Miles: “Sex and death - two things that come once in a lifetime... but at least after death, you're not nauseous.”

6. The Empire Strikes Back (1980)
What better homage to Flash Gordon than to end a $20 million movie with a cliffhanger? And we had to wait three years for it to be resolved. Audacious, yet the lack of an ending was a great ending in itself.

7. X aka X: The Man With the X-Ray Eyes (1963)
"If thine eye offends thee ... pluck it out!" A chilling end to a movie which looks hokey and exploitative but is also brilliantly thought-out and almost profound.

8. When Worlds Collide (1951)
The Earth is doomed and only a fortunate band of young and attractive people get to escape in a rocket ship. We get only a glimpse of their new planet, Zyra, in a matte painting, but it looks an idyllic place to start procreating for the good of the species.

9. Star Trek VI: The Undiscovered Country (1991)
In the closing moments, as the cast's autographs appeared among the constellations, it really did suddenly feel like I was saying goodbye to something that had loomed large in a lot of our lives. None of the cast should have come back in Generations.

10. Blade Runner (1982)
I could have my internet connection taken away for saying it, but I like the theatrical cut. I think it gets away with that “happy” ending. Anyway, it not happy, it's bitter-sweet. Who could fail to relish that closing line: “I didn’t know how long we had together... who does?”

Darren has written-up a great list here, and I'm particularly happy to see The Undiscovered Country make the cut.  That movie offers our final goodbye to the Original Cast (and still brings a tear to my eye).  A wonderful choice.
at July 19, 2013