Television and Cinema Verities: In the Words of the Creators # 3 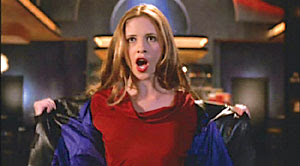 "I was asked, 'Do you want to do a musical episode of Angel or Firefly?' And I said, 'Not in a million years.' Those shows don't lend themselves to it.  The thing about Buffy is that you do the musical episode without violating the reality of Buffy.  That's the most important thing to me.  What's hilarious about working in fantasy is that you can say 'The evil twin thing? That's not reality, that's bullshit! Who buys that? But the dwarf going out of someone's head is fine.'...You have this seemingly arbitrary, but in fact very strict sense of what can go on in this world.
And Buffy is so sophomoric, romantic, colorful, tense, sexual...I think half the episodes feel like they're about to burst into song anyway...So to say a demon has come who causes musicals make perfect sense in that world.  It doesn't make sense in the Angel world to me.  It definitely makes no sense in the Firefly world.  It's a different kind of choice."
- Joss Whedon discusses the Buffy the Vampire Slayer musical, "Once More With Feeling" with me in 2004's Singing a New Tune: The Re-Birth of the Modern Film Musical (Applause Books, 2005, page 282).
at January 23, 2012