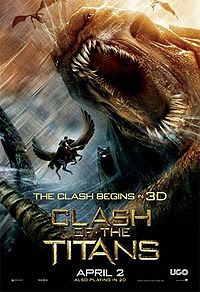 I first saw the original Clash of the Titans (1981) when I was eleven or twelve, at the Clairidge Theater in Montclair, New Jersey.

As a kid, I loved the movie without reservation, and found the fantasy, romance and adventure -- so ably imagined and executed by Ray Harryhausen -- entirely to my liking. The stop-motion effects/creatures were startling for their time, and painstakingly-achieved.

Specifically, I recall the film's atmospheric opening, which featured a Mother and her young child cast cruelly into the hungry sea...in a coffin. And then there was Medusa: a terrifying, nightmare-inducing creation lurking in the shadows, first seen in flickering candle-light. She was a nightmarish apparition, and one that endured in my memory for years after first watching the film.

But in judging the remake of Clash of the Titans (2010), I must ask the all-important question: would an 11-year old child today enjoy this Clash as much as I enjoyed the cult original all those years ago?

The undeniable answer is, yes...absolutely. I should make no bones about that. This is an elaborate, big-budget fantasy film with well-realized creatures and monsters, and some serious, dynamic action.

However, as a forty-year old film critic, I might point out my grown-up reservations about this re-imagination. I could explain, for instance, that this new version of the legend is decidedly less romantic in flavor than its predecessor was. The original film highlighted a love affair so passionate and enduring that it was recounted in the stars themselves, in the constellations of our very night sky. But here, Princess Andromeda (Alexa Davalos) is almost an after-thought in the screenplay and never casts more than a longing look at hunky Perseus (Sam Worthington). He hardly seems to notice she's there.

No time for love, Dr. Jones.

I might also note that there is far less humor, far less magic, and indeed, far less joy in this remake than was found in such abundance in Harryhausen's comparatively innocent picture. I might even note how the new film makes a mean laughing-stock out of the original film's R2-D2 surrogate, a golden clock-work owl named Bubo.

In our contemporary pop culture, there's just no space in the cinema for a cute-little sidekick like Bubo, I suppose, which explains why he is dismissed with that nasty in-joke. I mean, Bubo doesn't have golden testicles, and he doesn't fart, belch, rap or anything like that.

The point of this rumination is simply that we are in a different place, entertainment-wise, than America was in 1981, and this Clash of the Titans is definitively a product of today, not a product of that era. In other words, we are much further down the line away from theatricality and artificiality in the cinema than we were thirty years ago. Rather, the pop culture needle today points further towards realism and naturalism than ever before in our nation's history. Still, I don't think you can blame the movie for reflecting this reality. We can't rightly expect it to reflect anything other than the culture in which it was created. 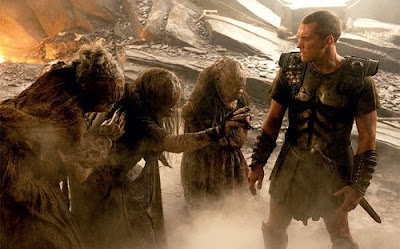 But because of our culture's increased, almost obsessive demand for realism, even the Gods of Olympus are somehow smaller-than-life and less magnificent in this version.

We demand definitive answers and immediate gratification about mysteries in our culture today, and so this Clash of the Titans insists on explaining the exact relationship of the Gods to humans: they thrive on our worship, literally, like our emotions are tasty nutrients. Zeus eats our love; Hades our fear. What humans get from the Gods, apparently, is environmental stability. Nature is controlled, at least until we step out of line.

Accordingly, much of this film involves how the humans of Argos tire of the Gods' capricious, tyrannical ways and decide to strike a blow for human independence. They want their country back. They want liberty and freedom. And yes, this is indeed a metaphor for the culture war going on in the United States today. There is, actually, a timely subtext here, and like The Dark Knight, it's on the "right" side of the spectrum, which is relatively rare in Hollywood.

The realistic approach to the drama dictates the very look of Clash of the Titans. Our protagonist, Perseus -- still a hero from Greek Mythology -- spends the duration of this film covered in dirt, grime and scorpion guts, and is also something of a lunkhead. This incarnation of Perseus lacks the imaginative, curious spark, and even the energy that defined Harry Hamlin's Perseus.

The character's background has been made even darker in the remake too, for the purposes of increased brooding and sustained emotional angst. Not only has Perseus lost a mother, but his biological father has been transformed into a monster, Calibos. Even Perseus's adopted family is murdered in tragic fashion...right down to his innocent little-sister. Let me be clear: what entirely motivates this Perseus is the ugly and commonly found human emotion of revenge. He's not in it -- like the people of Argos -- for liberty, freedom and emancipation from tyranny. Rather, he's got it in for Hades (Ralph Fiennes), who pulped his family's boat in a fit of rage.

As Spinal Tap might say at this point...none more black.

Symbolizing these changes in character motivations and story particulars, 1981's immacualte white Pegasus steed has been made entirely black for the remake. I'll try not to read too much into this significant color change, but it's worth mentioning. at least. More dramatic, perhaps, is the use to which Pegasus is put by the producers. In the original Harryhausen film, Perseus had to capture Pegasus, and laboriously train the horse. He had to put in significant time and effort to wrangle and tame the noble animal. In this version, Perseus literally just hops on his new steed with no introduction, no training, and no taming. Again, instant gratification. The original movie rewarded patience. This movie has no patience at all.

Once more, however, I don't blame the movie so much as the culture. Everyone's a dark knight these days. And we want action, not foreplay, apparently. But the upshot is that this new Clash of the Titan feels a bit commonplace and enervating, instead of magical and uplifting.

But you don't inspire people based on hatred, with only the thought of tearing something down, because of a heightened sense of victimhood or personal grievance. Simply opposing an existing structure for the sake of opposition accomplishes nothing; nature abhors a vacuum. It's "that vision thing:" it must be present for a new philosophy to take root in the hearts and minds of a people, and Perseus never makes the important case here that humans would be better off on their own.

In fact, he's a hypocrite. Perseus accepts Zeus's help throughout his quest. Zeus gives him a magical sword...and he (eventually) accepts it. Zeus gives him the coin to pay the ferryman...and he accepts it. Zeus even resurrects his would-be lover, Io. In other words, Zeus "entitles" Perseus...he successfully brings Perseus into the existing (apparently corrupt...) system, through these hand-outs.. Thus the film's message is thoroughly corrupted too. You can't trust the Gods...unless they're on your side. You must destroy the Gods...unless they can be helpful to you, personally. Do you really want liberty, or just gold coin? 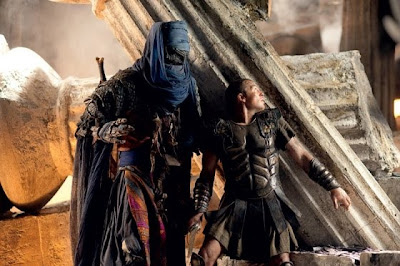 In addition to altering this story from one about love to one about hate, there's a weird, paradoxical quality about the remake too.

Specifically, there's much more violence in this version of Clash of the Titans, but somehow -- simultaneously -- much less terror. The original Medusa was the kind of imaginative, grotesque creation you'd think about before going to bed at night; and this Medusa -- though spectacularly rendered -- won't affect the delicate psyche at all.

My three year-old son could watch this Clash of the Titans and not be bothered in the slightest by Medusa's presence or appearance, whereas I wouldn't let him near the original film for several more years, because of Harryhausen's suggestion and intimation of terror in the Medusa sequence. Medusa was a nightmarish, legitimately scary creature in the original. Here, she's spectacular and amazing, but not scary.

Again, that tells you something about the culture now. It more readily accepts violence, but also blanderizes the violent material to some degree so as to achieve the widest possible reach...and the biggest audience.
at August 14, 2010