En Garde: The Magic of the Fantasy Sword Fight 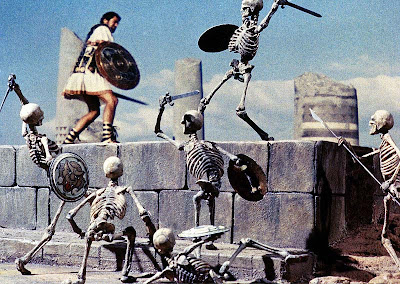 Although these days I generally live by the axiom that the pen is mightier than the sword, I experienced an epiphany on the subject of swords yesterday. Particularly sword-fighting in the movies. (and in genre movies, specifically, I guess.)

It was about four in the afternoon on Thursday, and I was playing outside with my three-year old son, Joel.

We were pelting each other with water balloons (it was like 100 degrees out...) when Joel picked up a stick -- and quite unknowingly -- began brandishing it as though it were a sword.

I picked up a stick too, and before we knew it, we were locked in a fast-moving sword fight of epic proportions...up and down my drive-way.

When Kathryn arrived home from work at about 5:00 pm, that's precisely how she found the two of us: Joel had a "sword" clutched in each hand, and was fearlessly attacking me -- whirling about -- while I cowered in a defensive posture, parrying his lunges.

In that moment, I was transported back to my own distant childhood in the 1970s. I experienced a flood of memories from favorite films; ones I hadn't thought about in a very, very long time.

For instance, I recalled Saturday afternoons in hot summer, playing with a toy sword and shield, and recreating with friends the magic of Jason and the Argonauts (1963), or the thrill of the sword-fights against other fantastic Harryhausen-created monsters in the Sinbad flicks (The Seventh Voyage of Sinbad [1958] and The Golden Voyage of Sinbad [1974].)

I remembered -- surprisingly -- how my favorite Star Trek episode as a six-year old kid was actually "Day of the Dove," because it pitted Captain Kirk against Klingons...with swords. God, I can't tell you how many times my friends and I put on our Star Trek utility belts from Remco, then ended up fighting each other with swords instead of phasers....

And naturally, of course, I thought of Star Wars. George Lucas was extremely clever in the way he crafted a sci-fi variation of the swashbuckling sword -- the "light saber" -- for his new cinematic universe. The 1970s was definitively the era of gun-toting, silver-screen anti-heroes like Dirty Harry (Clint Eastwood) and Kojak (Telly Savalas). Accordingly, in Star Wars, swords (er...light sabers) were explicitly positioned as being "an elegant weapon for a more civilized time."

Funny, that's precisely what Star Wars was too: a throwback to another, more romantic era of Hollywood history, before anti-heroes became all the rage. Think Errol Flynn's The Adventures of Robin Hood (1938) for instance. Touche, George, touche.
So anyway, I began to consider how, as a kid, many of my favorite fantasy/sci-fi movies involved sword-play in one mode or another. And then I realized that sword fighting had to absolutely be the geek equivalent to a sports obsession. I mean, just watch the amazing fight between Robin Hood and Sir Guy in that 1938 film (on a winding staircase, no less...), and you can see how the action is all about dexterity, speed, and physical grace. It's fascinating. It's a recognition of physical prowess, skill, athleticism and training... only cloaked in romantic, fantasy, and dramatic trappings. This fight is available on YouTube, but the embed is disabled...so seek it out if you haven't seen it.

Now look at how the cinematic sword fight standards are re-parsed in a more modern film like The Princess Bride (1987). There, the battle between two evenly-matched opponents is an opportunity not just for physical dexterity and speed....but for razor wit as well. Yep, the sword-fight is definitively the thinking man's sports addiction. Remember the Star Wars Kid, who in a (not-so) secret moment, picked up a light saber and just went nuts...expressing his inner geek? Well, that kid took a lot of mean-spirited ribbing, but I truly believe each and everyone of us who grew up with Star Wars (and also with sword-fights on film) understands the "force" that was driving that kid to move...to take up the sword-play.
It's not a violent impulse or anything. But to pick up a sword and lunge at your enemy...well, it's empowering, somehow. To know that all of your body is in tune -- a perfectly calibrated instrument -- and that you are moving with grace and purpose and determination; that your brain is reacting and acting with lightning fast-agility to each new challenge....it certainly beats the hell out of jogging. And watching Joel yesterday, I think this love of the sword fight is genetic.

So today -- on a lazy summer day when I'm feeling slack -- I've assembled below some of my favorite cinematic sword fights to spark your own memories. I'm sure I've left quite a few battles out (I couldn't find Ash's on-the-rampart battle from Army of Darkness, alas...), but these were the ones that popped to mind. The one in Jason and the Argonauts still dazzles me: it's a meticulously-constructed, perfectly edited combination of solid film techniques. I love how it doesn't rely on quick cuts or close-shots or a jerky camera to depict the special-effects-heavy action. Instead, exhilaration comes from watching the movements, the choreography; from the sense of escalation and tension of seeing the main characters in jeopardy.

And I know people dislike The Phantom Menace (1999), but this sword duel between two Jedi and a Sith Apprentice must be one of the most dazzling in genre film history. Lucas may have gotten other things wrong, (Jar-Jar) but he certainly got this sword-play right. He's aided in no small part, I should add, by the scoring of John Williams...which still gets the blood pumping.

Anyway, here we go. If you can, watch the clips in their entirety, so you get the feel of the building momentum before each fight commences. After you're done watching, take your kids (if you got 'em) for a sword fight in the drive way.