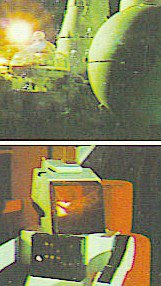 This week, on the CBS live-action kid vid series (from 1977) Space Academy, Commander Gampu (Jonathan Harris) and cadet Laura Gentry (Pamelyn Ferdin) investigate a nearby black hole from the relative safety of a Seeker (a kind of space mini-van). Results are "negative," but then the ship disappears inside the black hole, and the personnel are feared lost.

Meanwhile, back on Space Academy, Laura's brother Chris (Ric Carrott) is desperate to rescue his sister but meets with resistance from Paul Jerome (Ty Henderson), a new cadet on the team. He's from a "pioneer planet" where "survival was the name of the game" and hasn't gotten used to being part of a team yet. He only wants to look after himself.

But Chris is adamant, and on a Seeker mission with Jerome and Tee Gar Soom (and Peepo, the resident robot...) Gentry detects Laura's presence via their unusual mind-linking ability. The Seeker goes to "star speed" through the black hole, and emerges on the other side, at a desolate planet. There, on the surface, the team confronts a giant stop-motion dinosaur (with chin whiskers...). The creature is angry and also powerful, capable of rendering itself invisible for short spells. Paul saves the day by distracting the creature while Chris and Tee Gar rescue Laura and Commander Gampu.

At first, Tee Gar and Chris think that Paul is running back to the ship, protecting his own hide, but then they realize that he has bravely lured the monster away. Lesson of the week: "People learn and change."

Remember, this is a sci-fi space series designed for children, so it's typical that Space Academy hammers home (without much subtlety...) a valuable moral lesson each week. Frankly, I found this episode a lot less entertaining than the opener about Zalon, but I guess a child wouldn't find it so ponderous. A bigger helping of science might have helped -- more detail about a black hole and what it can do. But maybe that's just asking too much of a 22-minute 1970s space adventure for children.

What do we learn about the universe of Space Academy this week? Well, a Seeker can attain "star speed" (light speed?) and fire a "gravity ray" that can render big stop-motion dinosaurs sleepy (a non-violent way of removing a threat...). We also hear the series' catchphrase, Loki's exclamation of "Camalopartis," meaning "Wow!", in case you were wondering. The actual word "Camalopartis," we learn from Paul, is derived from the name of a distant star cluster.

Also, Loki and Peepo play "computer" tic-tac-toe this week, and when Loki loses, the computer scrawls out the legend: "You lose, Turkey." Nice to know that in the year 3732 AD and beyond, people will still be using the word "Turkey" as an insult...just like in the 1970s!
Finally, I have to say, I love good old-fashioned Saturday morning TV, even though I'm an adult. After watching this Space Academy episode, I flipped through the channels on "live TV" this Saturday morning. And you know what I found? Paid programming, paid programming, paid programming and more paid programming...in other words, informercials.

So if you ask me the question how has our world changed since the glorious and groovy 1970s, I'd say that once upon a time in our culture, we had time for top-notch programming designed for children - with good lessons included - but today, all we want to do is make money, and sell more beauty products or grills.