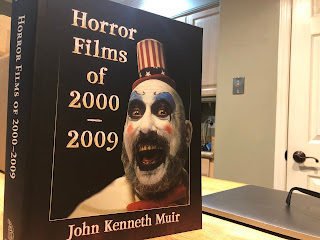 MOVIES MADE ME: Book Review: Horror Films of 2000-2009:
"Back in the mid-90s, John Kenneth Muir staked out ground as a film critic willing to take horror cinema more seriously than most. Buoyed by the success of his early books about iconic directors like Wes Craven, John Carpenter, and Tobe Hooper, he launched a series of mammoth studies of American horror films organized by decade. The nearly 700-page Horror Films of the 1970s came out in 2002, followed by the 800+ page Horror Films of the 1980s in 2007, and the comparatively slim Horror Films of the 1990s in 2011. Now he ventures into a new century with Horror Films of 2000-2009, a 900-page exploration of what Muir characterizes as the triumphant return of the great American horror film. “Bad times make for good horror films,” he declares, and the cultural turmoil of post-9/11 America helped filmmakers—and critics and scholars—rediscover the genre’s “voice and purpose."
at December 03, 2022