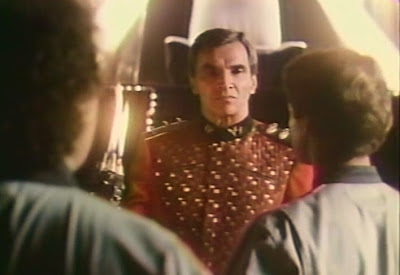 In the second episode of the short-lived 1985 cult series Otherworld, “The Zone Troopers Build Men,” young Trace Sterling (Tony O’Dell) is conscripted into the Zone Troopers, and sent off to basic training.

His worried parents attempt to rescue him from a life-time of involuntary service, but Trace realizes something important about himself at the 13-week boot camp: the training he receives is valuable.  It changes him.
As the episode opens, Trace is failing at his new school in a small, out-of-the-way agricultural community.  He just can’t get very excited about a high-school exam concerning…corn.  Trace’s low grades result in a “yellow warning,” meaning that the Zone Troopers are free to break into the Sterling house and take away Trace in the thick of night.
As Mr. Sterling insightfully notes “this culture is not as permissive regarding teens as 1980s America.”
Indeed. 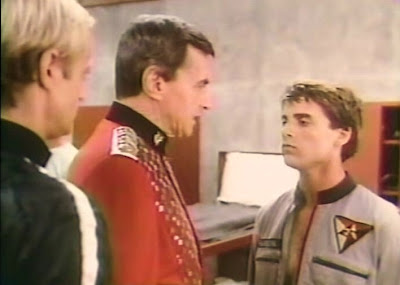 Soon, the sheltered Trace is undergoing rigorous training at the draconian hands (and torch…) of merciless Perel Sightings (Mark Lenard), the equivalent of a drill-sergeant.  But where this new Z.I.T. (Zone Trooper in Training) differs philosophically from his mentor is in weighing the importance of compassion and loyalty.  Perel sees such  qualities as weaknesses, but Trace knows they are strengths.
On graduation day, Trace demonstrates his compassion – and independence from the Zone Troopers – by refusing to destroy several rebel encampments from the cockpit of his “vampire” air-craft.  He betrays Sightings, but Sightings allows Trace to escape, having learned, perhaps, to respect the young man.
In short, I’ve always considered “The Zone Troopers Build Men” to be one of Otherworld’s finest hours, in part because of the strong presence of Star Trek's Mark Lenard in a significant role, but also because it offers a rather three-dimensional examination of the so-called military mentality. 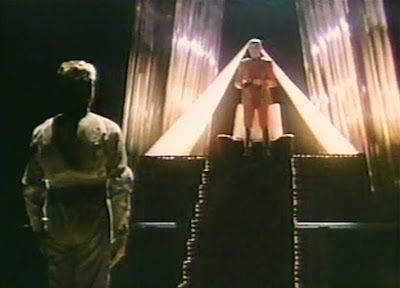 Military service is about being part of a hierarchy and following orders, but too often people forget true service is also about becoming a fully-realized, capable individual…one who knows when orders are wrong, and will do something about that fact.

Trace clearly benefits from the skills he learns in the Zone Troopers, but that fact doesn’t change the truth that the organization – no matter its revered “Hall of Heroes” – takes its marching orders from a corrupt and cruel state.  Trace is able to separate the commendable ethos of the Zone Troopers ("proficiency, pride and prowess") from the unfit command structure that deploys it.
This is undeniably Trace’s best episode in the series because the young man takes responsibility for his actions (and failures in school) and emerges “with a deeper understanding” of what it means to commit to something.  "The Zone Troopers Build Men" is about Trace finally growing up, and about Hal's recognition of that fact about his son. 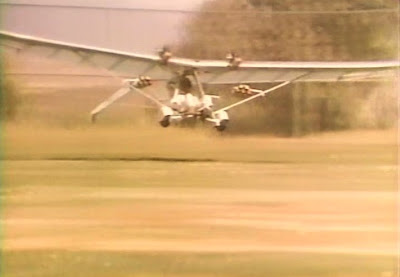 Written by Coleman Luck and directed by Richard Compton, “The Zone Troopers Builds Men” also does a fine job of reminding viewers that “this is not the United States.  They don’t look at things the way we do,” as Hal Sterling comments.
In other words, there is still enough alien about this world to distinguish it from home.  Like holographic tests in high school, and computerized lockers that “talk” to student.  Or a "combat" robot that nearly offs Trace (but which looks kind of ridiculous, and must be hidden with some manipulation of color in the frame.)
All that established, the budget is clearly stressed here.  The Zone Troopers drive contemporary mini-vans, and the vampire aircraft – designed for “psycho terror” campaigns – are clearly pretty flimsy little gliders.  You'd think this army would be better equipped. 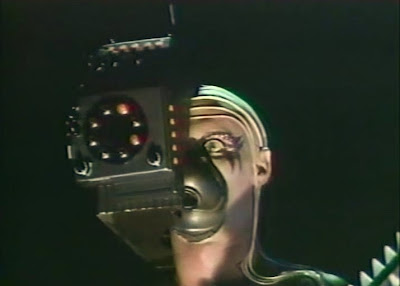 On the creepy and oddball side, this episode features a wonderful and bizarre interlude in which Trace is led through a Zone Trooper museum, and there are all of these weird, totally-unexplained wax figures -- heroes of the Unification Wars -- displayed there.

You get the feeling the creators of the series had some interesting history in mind there, and I love when Otherworld heads off on these unexplored weird tangents.
at March 08, 2021