In "Computer Affair," three interceptors are launched from Moonbase when a UFO incursion occurs.  The first UFO is destroyed in space, but the second passes through Earth's outer defenses after colliding with an interceptor and killing an astronaut.

Colonel Freeman (George Sewell), who was on Moonbase during the disaster, orders base commander Ellis (Gabrielle Drake), and astronauts Bradley (Harry Baird) and Waterman (Gary Meyers) back to Earth for a thorough investigation of the death. The three officers involved are sent to SHADO's Psych-Analytic Department, and a computer assessment reveals that Bradley and Ellis are in a  romantic relationship. Did Ellis flub the mission out of concern for Bradley?

Although the computer and psychologist recommend sending Bradley and Ellis to different posts, in different locations, Alec proposes another test. He orders them to accompany him, via Mobiles, on a hunt to find the alien ship that made it through the defense perimeter.

The UFO landed in Canada, and unbeknownst to SHADO operator, is hiding beneath a lake... 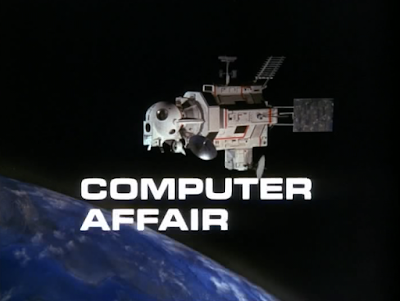 "Computer Affair" is a fascinating human tale about two issues, primarily: race, and technology. These issues are handled well, and actually give Alec a chance to sit in "the responsibility seat" for a change, despite the fact that the narrative moves at a snail's pace, especially compared to some of the series' other, mind-bending fare (like "Timelash.")

In this episode of UFO, it is revealed that a Caucasian woman in a position of power, Ellis, is engaged in a romantic relationship with a man of color, an accomplished astronaut, Mark Bradley.  For Straker and Alec, the interracial nature of that relationship does not appear to be an issue.

For Mark and Gay, however, it clearly is. This touch seems very realistic. Even though the series posits a post-racial future of equality, wherein prejudice and bigotry have "burned out," there is still, apparently, a sense of uneasiness about that new world order among individuals.  This is true to life because everyone in a society does not "move" or "grow" at the same rate. What society finds acceptable, or right, is not always mirrored by everyone, at the same time. So Mark and Gay may feel justified and right in their feelings for one another, while still feeling that others view their relationship in a negative light. 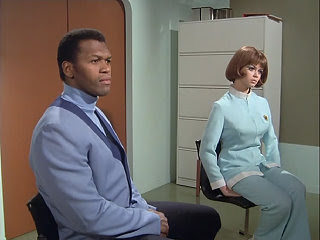 Clearly, race hatred still exists in the far-flung world of 1980, or the SHADO psychologist wouldn't try to spar with Bradley by knowingly making racist comments to him, as he does. In other words, not all of society has progressed beyond race hatred, and it is something that Bradley still must contend with, or at least fear. Based on the next episode, "Close-up," gender issues are still very much a big deal in this future. But more on that next week.

"Computer Affair" is also clearly a commentary on technology. Ellis and Bradley go through a battery of computer tests, and the computer makes a final decision that they should be sent to separate posts.

Alec objects to the computer taking a front seat in command decisions, and submits his resignation letter. Straker, however, overrides the computer, and makes the decision for himself after Alec's test. The two officers are allowed to continue to serve together, and continue their relationship.  So, what UFO seems to suggest is that computers may make recommendations, based on facts but a good commanding officer, such as Straker, will always reserve the final decision for himself (or herself, in those cases). 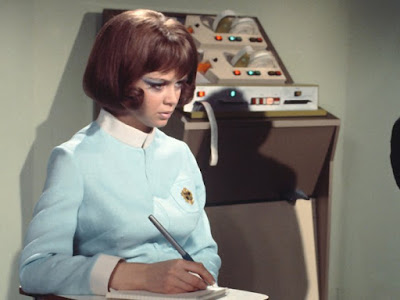 Going back to the discussion of society, however, one wonders if others, in related or unrelated fields, have let the computers take control. In other words, is Straker an outlier? Do other commanding officers or CEOs, even, take the input of machines/technology, without putting themselves on the line?  That would certainly be one implication of this story.

Because "The Computer Affair" deals with ideas of how this future world deals with racism, and technology, it's a unique and worthwhile addition to the canon. Today, however, the narrative moves slowly. A perennial problem is that the series spends too much time on loving, long takes of miniature vehicles in action, rather than focusing on the human action. 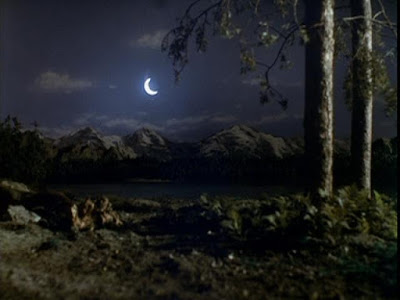 Also, it is a relief that for once a UFO does not land in the English countryside. Instead, this week, Canada is the target.