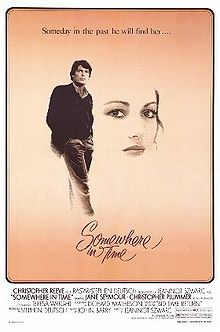 More sad news today.  The press is now reporting the passing of John Barry, aged 77, one of the cinema's greatest composers.
John Barry will be long remembered for his scores to almost a dozen James Bond films, including From Russia with Love (1963), Goldfinger (1964), Thunderball (1965), You Only Live Twice (1967), On Her Majesty's Secret Service (1969), Diamonds are Forever (1970), The Man with the Golden Gun (1974), Moonraker (1979), Octopussy (1983), A View to a Kill (1985) and The Living Daylights (1987).
But outside the world of 007, John Barry also earned several Academy Awards for Best Original Score.  His scores for Born Free (1966), The Lion in Winter (1968), and Dances with Wolves (1990) were all recognized with Oscars.
And genre enthusiasts will also recall John Barry scores that should have won Oscars, but did not, namely the gorgeous, emotionally-affecting Somewhere in Time (1980).  Barry also composed the distinctive scores to such fantasy and sci-fi films as the remake of King Kong (1976), Star Crash (1978) and another underrated Barry masterpiece, The Black Hole (1979).
CNN Reports:
(CNN) -- Film composer John Barry has died after an award-winning career spent writing the score for many movies, including 11 James Bond films, a friend said.
Barry won Academy Awards for his work on "Dances with Wolves" in 1990 and "Out of Africa" in 1985. He also won for "The Lion in Winter" in 1968 and "Born Free" in 1966, according to the Academy of Motion Picture Arts and Sciences. He was nominated in 1992 for his work on "Chaplin" and in 1971 for his work on "Mary, Queen of Scots."
He also wrote the theme songs to 11 James Bond movies, according to United Agents, the agency that represented him.
"There was something elegantly effortless about the way John created seemingly simple tunes that were in fact very complex," said David Arnold, a friend and fellow Bond composer. "The fact that these tunes went straight to your heart is just more evidence of the man's genius."
When I pen these tributes to great film artists, I often conclude with the thought that the best way to honor those who have died is to remember and experience their life's work anew.  With John Barry, this is also true, and the talented artist leaves behind a vast, incredibly impressive body of work.
So today, I shall listen to Somewhere in Time, and remember how beautifully and emotionally John Barry expressed a love that could survive the mysteries of time itself.
John Barry will be missed, but his music and life's work, like that love affair in Somewhere in Time, will endure.
at January 31, 2011