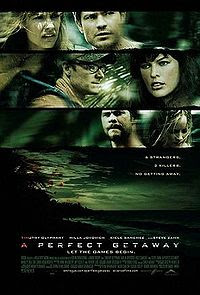 From the trailers, I judged that the film just looked...generic. A bunch of vacationers in an isolated (but lovely) spot get killed off one-by-one by some garden-variety psychopath.

Been there. Done that.

But then I learned that A Perfect Getaway had been written and directed by none other than David Twohy. Now my curiosity was piqued.

After all, this is the underrated talent who directed the very best John Carpenter movie not actually directed by John Carpenter: 2000's sterling Pitch Black.
Twohy also made The Arrival (1996), a film which posited global warming as a secret alien terra-forming strategy. Not a perfect movie, perhaps, but a damned inventive thriller, replete with black hole bombs, creepy alien metamorphosis special effects, some nineties-era big-government paranoia, and a rousing final action scene set atop a giant satellite dish.

Yet despite Twohy's leadership here -- at least starting out -- I still felt that sinking feeling about A Perfect Getaway. It begins (sort of...) with a handsome, just-married couple arriving in Hawaii for a vacation. But Cydney (Jovovich) and Cliff (Zahn) aren't exactly smart travelers.
In short order, these characters make every mistake you can possibly imagine in term of horror movies and the "Stranger in a Strange Land" genre conventions. To wit, Cydney and Cliff show off their heaps of cash (their "wedding haul") to strangers. Then they are rude and crass in front of the locals (Cydney brings up blow jobs out of-the-blue...), Next, they recklessly stop to pick up two hitchhikers: the very menacing Kale (Hemsworth), and his girlfriend, Cleo (Marley Shelton). Worse, once they've made the offer of a ride, Cyd and Cliff try to slink out of it. Subtle.

But even as I grew quickly irritated with Cydney and Cliff for their rampant stupidity and social awkwardness, I found myself growing intrigued by Twohy's choices as a director.

In Kale's first scene, for instance, we never see the hitch hiker's face above the line of his moustache. It's not just a shot here or a shot there, either. A scene of some duration occurs by the roadside, and rough-and-tumble Kale is on screen talking...but we never see his eyes. At the very least, this approach is unnerving. More than that it's a metaphor for Twohy's approach to the entire film (and his steely focus, in particular, on lying eyes...).

Before long in A Perfect Getaway we learn that two innocent newlyweds have been murdered in Hawaii. With this data in the forefront of our thinking, we cringe when Cydney and Cliff easily take-up with two more strangers: Nick (Olyphant) and his butt-kicking, Southern girlfriend, Gina (Kiele Sanchez). Could they be the killers?

And did I happen to mention that Gina learned the fine art of animal butchery (by hatchet no less...) in the local Piggy Wiggly meat department? Or that Nick is "hard to kill," meaning he survived a land-mine explosion in the Iraq War? Said explosion pulped the back of his skull, but he was ambulatory for another seventeen minutes. Fall unconscious? Nah. He just wanted a cigarette..

The first hour of A Perfect Getaway is beautiful to watch, set in "the most gorgeous dead-end God ever made," but I feared I knew exactly where it was headed with all these seemingly off-the-shelf characters. For example, Cliff is an aspiring Hollywood screenwriter, and he and Nick keep discussing second act twists and red herrings. This sort of Scream-esque self-referential business is ten years out-of-date at this juncture, and just feels old and hackneyed. Thus I feared the movie would grind on to the predictable twist, be inordinately pleased with itself, and then end with a lot of sturm and drang.

However -- and I still find this miraculous -- the movie's twist is an absolute humdinger. Seriously. At about the hour-point, this formerly staid, seemingly predictable thriller kicks into high gear. The images go from luxurious color to cold glinty silver. A Perfect Getaway suddenly shifts into black-and-white film noir mode, and everything we thought we knew and believed is up for grabs. I don't write any of this lightly, but A Perfect Getaway lulls you into a sense of complacency before pulling the rug out from under you. Again, I was astonished...

What I feared would be an insipid movie about vapid characters instead becomes an animal of an entirely different stripe. And again and again, Twohy returns to a common conceit: the bonds we make with our eyes. How our eyes judge who is trustworthy. How our eyes reflect what we're feeling. How our eyes can lie, when necessary.
In the silver light that reveals the villains' m.o. (in flashback), their eyes are black and opaque, like their motives. They look like human sharks. Predators.
And then there's a great, tense scene near the end of the film during which a character in need of help meets a group of strangers. The killer arrives and attempts to sabotage her with the suspicious strangers. The killer claims our heroine is addicted to Meth. He claims she's out of her mind; that she's high. The strangers almost believe his story. And then, suddenly, one of the strangers has a thought about the killer's eyes. And the victim's eyes. And the game is up.

Even the motives of the killers comes down to the eyes, and what the eyes witness. The two villains are classic narcissists, you see. "Nothing exists until we get there" is their mantra. In other words, the world is their oyster. The world and its population mean nothing, at least outside of what it means to them. To further establish this point, there's a scene set on a beach in which the killer looks away from the tumbling waves-- and the waves actually freeze -- until he turns back to face them. They are their whole world, and nobody else and nothing else matters. There's no sense of empathy, compassion or humanity in them.

Or, at least in one of them.

Early in the film, Nick informs Cliff that when writing a movie, it is important to get the details right. Otherwise all you end up with is your basic "craptastic movie." Twohy seems to have internalized this message, and crafted a thriller that absolutely plays it straight; that absolutely earns your admiration; that stays two-steps ahead of you. This movie is so clever that it demands a second viewing so you can square yourself with your lying eyes. Especially in the first half of the film. The moves you thought were stupid and off-the-shelf? A second time, you realize precisely what's up.
A Perfect Getaway, even features a great title. Going in, you think this thriller concerns the perfect vacation spot; and the irony of finding terror in such an idyllic setting.

Coming out, you realize the title means something else entirely.
at February 27, 2010

Email ThisBlogThis!Share to TwitterShare to FacebookShare to Pinterest
Labels: 20000 Leagues Under The Sea, cult movie review