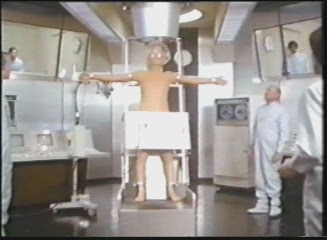 The San Francisco Chronicle and other news outlets have reported this week that Rod Roddenberry and Ron Howard's production company, Imagine, are teaming to produce a new version of the classic 1970s Gene Roddenberry TV pilot, The Questor Tapes:

"The script, about a robot with incomplete memory tapes who is searching for his creator, was originally written by Roddenberry as a 13-episode TV series, but after disagreements with bosses at America's NBC network the sci-fi mogul abandoned the project.

The production eventually aired as a one-off small screen movie in 1974 - and now Roddenberry's son is hoping to bring "The Questor Tapes" back to life to honor his dad's memory.

Rod Roddenberry says, "My father always felt that Questor was the one that got away. He believed that the show had the potential to be bigger than Star Trek."

Personally, I think this is great news: The Questor Tapes never got a fair shake in the 1970s. Network brass wanted it to look more like The Six-Million Dollar Man than an original series and so Roddenberry stuck to his creative guns...scuttling the show. Although I'd rather see Genesis II re-made, I believe Questor would make for a great new series; especially as we continue to lose quality sci-fi program, seemingly by the bushel full.

Here' a snippet of my review of the original TV movie:

The Questor Tapes is an almost perfect representation of the Gene Roddenberry aesthetic. There is (gentle...) criticism of 20th century industrial/technological mankind here, his "squalor...ugliness...greed...struggles."

Yet this damning view is balanced and tempered by an essential optimism about intrinsic human nature. Our "greatest accomplishment," declares Questor is "our ability to love one another."

Questor is a character much like Mr. Spock or Lt. Data -- an outsider who is nonetheless fascinated by mankind. The perspective as "outsider" permits Questor, Data or Spock to be both critical and positive about the human race, without any of it seeming personal, political or petty. Like Spock, Questor is dedicated to logic, and uses that word (logic) frequently. "Logic indicates the simplest plan is often the best," etc. And also like Spock, Questor is peaceful. He is not programmed to kill, yet he can incapacitate enemies with the equivalent of a "nerve pinch."

But if Questor is a child of Spock, he is also the father of Data. There can be little doubt of that. Questor desires to be human, just like Data, and wants to understand humor. "Humor is a quality which seems to elude me," he tells Jerry at one point. Also, like Data, Questor is a sexual being, and this facet of his personality also conforms to an essential quality of all Roddenberry productions: kinkiness.

To get information out of Lady Helena Trimble, Questor -- an android -- makes love to her. Beforehand, he tells her that he is...um..."fully functional." Next Generation fans will recognize that particular turn of phrase from Data's seduction of Tasha Yar in the first season episode "The Naked Now."

In another scene from The Questor Tapes, Jerry and Questor visit a European casino and Questor learns that the House is cheating, utilizing fake dice. The android is able to beat the cheaters by adjusting the balance of the dice. In the second season episode of The Next Generation entitled "The Royale," Data does precisely the same thing.

The Questor Tapes has aged poorly in a few, minor ways...all mostly visual. For instance, a close-up glimpse of Questor's high-tech interior reveals a rotary telephone cord...not exactly state of the art. And the very idea that "tapes" would carry an android's programming? Well, that is passe, of course too. Even Vaslovik's Information Center is obviously pre-world-wide-web.

Yet none of that matters in the slightest. What matters here, and what grants The Questor Tapes a real "heart" is the relationship at the forefront of the production: the friendship between a human (Jerry) and a machine (Questor). There's funny banter and quiet affection there, and the relationship will remind you (in a positive, not derivative...) way of the long-lived Kirk/Spock friendship. It's different in that Jerry has no authority over Questor: he's a teacher in the subject of humanity, not a commanding officer. Despite the difference, there's definitely charm here...
at January 24, 2010