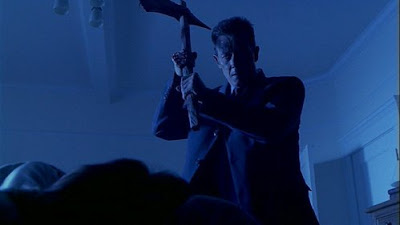 In philosophy, the "via negativa" is an approach to understanding God. Somewhat counter intuitively, it's a strategy that seeks to define God by enumerating those things God is not. God is not mortal. God is not Evil. And so forth.
Sometimes, this unusual approach to comprehending the Divine is also called Negative Theory or The Negative Way.
And in the chilling X-Files episode "Via Negativa," this approach lives up to that nomenclature. The "Via Negativa" of the title is a lonely, unlit walk to the dark side: a spiritual dead end. More specifically, one possible pathway to "knowing" God turns out only to be a pathway to absolute darkness. The dimension of God's "absence" is not...a good place to be.
Written by Frank Spotnitz and directed by Tom Wharmby, "Via Negativa" aired during the eighth season of The X-Files, on December 17, 2000. As you may recall, this was the span that introduced the new lead character on the series, Agent John Doggett, played by Saturn Award winning actor Robert Patrick. All you need to understand about Doggett is encapsulated in his very name: he's literally "dogged:" adamant, firm, indefatigable, persevering, resolute, even pig-headed.
Or put another way, Doggett is your traditional good cop who doesn't let go of a case until it makes sense to him. In "Via Negativa," the character's faith in the rational, in cause-and-effect, in logic, is dramatically put to the test.

"Via Negativa" finds stalwart Doggett investigating the brutal murders of two FBI agents who were staking out an apocalyptic cult. In contravention of long-standing series format, Doggett is investigating this particular X-File alone because a pregnant Scully is away at the hospital. Still new to the X-Files unit, Doggett is uncertain and somewhat rudderless. He's no Mulder, and has no interest in being Mulder. Leaps of faith don't come easily, or naturally, to him. Without Scully to ease him in, the "dogged," meat-and-potatoes Doggett is, in a very real sense, vulnerable, to what he learns during this investigation.
While on the case, Doggett discovers that all the members of the apocalyptic cult also died horribly, and that their still-at-large leader, Anthony Tibbett, is an ex-convict who developed his own peculiar brand of evangelical Christian/Hindu philosophy. "Heaven's Gate" -- the UFO cult led by Marshall Applewhite -- is mentioned briefly in the teleplay here, and Doggett wonders if Tibbett's people were willingly part of a death pact similar to the one that claimed the 39 members of that cult in 1997.

The Heaven's Gate folks reportedly believed they were headed to the "next level of existence," one without the need for a physical body. By comparison, Tibbett suggests that "the body is but clay...to hold the twin aspects of the human spirit: the light and the darkness." Furthermore, he believes that if his dedicated followers gaze into the path of darkness ("the via negativa" of the title), they will see God there.
To help them reach this dimension of darkness, Tibbett administered experimental hallucinogens that would awaken their "Third Eye." It is this "Third Eye" -- the Hindu gyananakashi, or "Eye of Knowledge, positioned between hemispheres of the brain -- that could see into the realm of darkness. We have seen the Third Eye in Scripture (the Book of Revelation) and in modern horror films (From Beyond [1986]), and in The X-Files it is the telltale indicator of one's arrival on the Via Negativa, a dark, lower plane, rather than an enlightened, higher one.
When a now-comatose Tibbett evolved his own "third eye," the cult leader found he could actually enter into the subconscious minds of all those he encountered. Thus -- like nightmare avenger Freddy Krueger himself -- Tibbett could enter the dreams of his enemies. And as we all know from A Nightmare on Elm Street (1984), if you die in your dreams...you die in real life.

Doggett delves deeper and deeper into Tibbett's strange, dark beliefs until the agent himself takes an unwitting walk on the via negativa during a horrifying dream sequence. The scene is cast in a suffusing blue light, with intermittent fade-outs and pulsating strobes providing a sense of fractured time and consciousness. This tense, mostly silent scene sees a sweaty, desperate Doggett (depicted in extreme close-up) contemplating murder...and his own internal darkness. Doggett finds himself, he believes, inside Scully's apartment...holding a ceremonial hatchet...Tibbett's weapon of choice. Doggett is faced with the choice of becoming Tibbett's new murderous vessel...or killing himself and ending the nightmare permamently.

Another scene, in which a vulnerable, confused Doggett confesses to a baffled Skinner (Mitch Pileggi) that he is uncertain about his own state of consciousness (dreaming or awake...) also serves as Doggett's real indoctrination into The X-Files...the horrifying case from "outside" that changes him "inside." At the same time, this confession allows us to identify with Doggett for one of the first times on the series. He has gone from being "skeptic" to being "open" (if not a believer.) He understands -- or at lesat senses -- the danger...to his soul.
"Via Negativa's" climactic moments -- with Doggett wrestling with that decision of homicide/suicide -- today endure as among the series' grimmest. Often in The X-Files, the horror is tolerable because we "know" the characters and their central relationship so well; because we know Mulder will rescue Scully or vice-versa. But in "Via Negativa" there's a deep underlying fear at work. Doggett has no support system. He has no one to hold onto; no one to race to his side when he is faced with death. His walk on "the dark path" is really and truly a walk alone (or so we believe, until the denouement) and there's something incredibly unsettling about the brand of evil he faces.

As I wrote above, the Via Negativa attempts to describe God by describing what God is not. In essence then, it charts the absence of God. I'm a committed atheist, of course, and yet the final moments of "Via Negativa" make even the non-believer feel that weight of...absence. The absence of Good. The Absence of Light. The absence of conscious control. It's about existential...aloneness, and it's pretty terrifying.

I've always admired The X-Files. Week in and week out for nine years, the series devised new, cunning ways to terrify the audience, and "Via Negativa" remains one of the most original and most horrifying installments. Here, the horror rests not outside us in some third party. Not in a monster that can come and kill you. But in your own awakened sight. The skillfully-crafted, brilliantly-directed episode also puts truth to the lie that The X-Files somehow grew stale or unsatisfactory during the final seasons.
With episodes such as "Badlaa," (about a legless Indian peddler who would...climb inside people), "Roadrunners" (a body invasion story set in a weird, isolated town...) and the mystical, existential "Via Negativa" dominating the Season Eight catalogue, The X-Files' heritage of horror was honored. The writer here (Spotnitz) not only had to deal with the absence of God, he had to deal with the absence of Mulder (and Scully, actually...)!

"Via Negativa" is so stirring, so disturbing, that it brings us to a reckoning about Patrick's Doggett. Despite our allegiance to Mulder...we like the guy. And thanks to "Via Negativa," we're scared as Hell for him.
at August 12, 2009