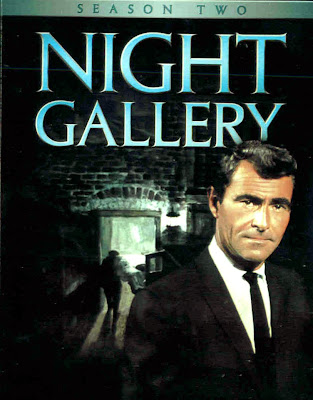 This classic Night Gallery episode concerns a "little beastie" called an earwig. This tiny insect from Borneo boasts a fondness for the warmth of a human ear...but -- as host Rod Serling reminds viewers -- it doesn't exactly "whisper sweet nothings" once inside. Nope. It does something...horrifying.

"The Caterpillar," directed by Jeannot Szwarc (Jaws II, Somewhere in Time) aired in March of 1972 and is based on the famous short story by Oscar Cook (1888-1952), a former civil servant who actually served in Borneo from 1911-1919. Cook's story is set in Borneo, but the old wives tale about earwigs burrowing inside human ears (and brains...) has been chronicled as early in history as 1000 AD. A quick search on the Internet will reveal a number of news and science sites debunking the gruesome notion that Earwigs can crawl through the human skull. But still...ick.

"The Caterpillar" (adapted by Rod Serling) follows the arrival in Borneo of one extremely prickly British civil servant, Stephen Macy (Laurence Harvey). This cruel, nasty, arrogant man moves into the home of two other Brits, sixty-sixty year-old Mr. Warwick (Tom Helmore) and his gorgeous young wife ("an absolute knock-out"), Rhona (Joanna Pettet). As you might suspect, Macy soon makes trouble. He is disturbed by the incessant rain in the tropical location, and -- battling cabin-fever -- turns his obsessive eyes towards Rhona.

Macy's attentions are unwanted, but that hardly stops him from making lewd remarks and undressing the married woman with his eyes. When asked if he is hungry for dinner, if he has an appetite, Macy stares right at Rhona and notes that indeed his appetite is "slowly growing." Later, Rhona advises a cure for Macy's loneliness and abstinence: a "cold bath."

But Macy is a prick, and isn't content with the status quo. He is convinced that Rhona should be with him rather than the kindly old man, and meets with a local rogue, Tommy Robinson (Don Knight), in a bar. Robinson suggests not an assassination, but rather an "act of destiny." For a price, Tommy will send one of his native friends to deposit an earwig on Mr. Warwick's pillow.

These bugs are so light, so small, that they are practically unnoticeable. And, according to Robinson, earwigs have this"decided liking" for the human ear. Once inside the ear canal, the odds of an earwig evacuating it are a thousand to one. They can't turn around you see, and so instead keep plowing endlessly forward...burrowing into the brain and feeding on grey matter as they seeks an escape route.
The pain caused by these "stealthy chaps" is agonizing, horrible, and death is nearly always the result. Still, this sadistic plan appeals to Macy. He feels that after her antiquated husband dies, 28-year old Rhona will turn her affections to him. With little shame, Macy authorizes the plan. However, Robinson's thug makes a fatal mistake that very night...and puts the earwig on Macy's pillow instead of Mr. Warwick's.

Macy wakes up the following morning with a bloody ear and immediately realizes what has occurred. The earwig is inside his ear! In the ensuing two weeks, Macy undergoes agonizing pain as the earwig digs in. In fact, his hands have to be bound to his bed-posts so Macy doesn't claw his face apart in an attempt to get rid of the skittering bug feasting on his brain.

By some miracle, Macy survives the ordeal, which he describes as an "agonizing, driving, itching pain," and the earwig exits his ear. An unrepentant Macy tells the Warwicks that what he did, he did "for love," and that he paid the price with two weeks of Hell.

Unfortunately, those two weeks are only the beginning of Hell for Mr. Macy; a fact you will recall if you remember the segment's final punch-line before the fade-out (one revealed in intense, declarative close-up). I won't spoil the ending here, but suffice it to say that "The Caterpillar" boasts one of the nastiest and most macabre twists ever featured on Night Gallery (and likely network television, for that matter.)

Rod Serling's teleplay is whip-smart, witty and terrifying, but the episode likely belongs to Laurence Harvey, who plays Macy as a smarmy, monstrous bastard. You may hate Macy, but after witnessing his ordeal (again, in harrowing, unrelenting close-up...), you do feel some compassion for the man and his painful odyssey. There are moments here -- with Macy tied to the bed, gasping for air -- when it looks as though Harvey's bulging eyes are actually going to explode out of his head. His pain is palpable, and you can just imagine what's going on inside; how that thing is probing and pushing its way through his skull.

There's no real gore in "The Caterpillar," and the titular insect is never glimpsed, even for a second. Instead, we simply see what the bloody thing does, a torture painted on Harvey's expressive, gaunt face. And we listen as a physician (John Williams), Robinson, and a survivor describe the pain experienced...and the pain yet to come. Despite a lack of horrific visuals, the episode proves utterly harrowing (and involving).. Kathryn had to turn away from the last ten minutes because she felt the episode was so disturbing in nature.

"The Caterpillar" is probably Night Gallery's most famous episode; and for very good reason. Next time you have an ear ache, I defy you not to think of this episode. And of earwigs.
at November 14, 2008