Johnny Byrne Thought of the Week (#6) 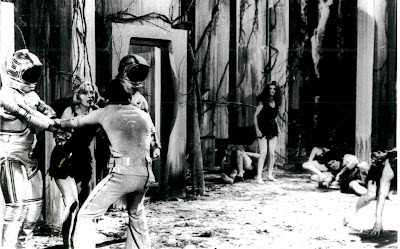 "If the same thing had happened on Alpha, would you have chosen differently?"
-Alan Carter asks Commander John Koenig a question in Space:1999's "Mission of the Darians," by Johnny Byrne.

I've written here before about Space:1999 and how the 1970s outer space series dramatized a universe of limited resources and "limited options for survival" (as critic Dick Adler put it). One of the best episodes in terms of dealing with this struggle for survival in a galaxy lacking plenty is the 22nd episode of Year One, Johnny Byrne's "Mission of the Darians."

In this story, Moonbase Alpha encounters a vast wrecked ship called the Daria, which - 900 years earlier - faced a Three Mile Island-type accident that killed off most of the population and rendered vast swaths of the giant space ark uninhabitable. There is little food, fewer resources on this roaming vessel, and now, the ship 's population lives under a bizarre class stratification. Primitive barbarians inhabit Level 7 and deliver unto their god, Neman, "perfect" beings. Angels (actually men in space suits), come to pick them up and take them back to a Heaven of sorts, another deck. By contrast, imperfect beings...are fed into a booth that is actually a disintegrator. Imperfections are classified as any body deformity or abnormality resulting from the lingering radiation.

What these barbarians (who "cling" to religion, to coin a phrase...) don't know, however, is that Neman is just an invented God doing the bidding of an invisible upper class. And so that upper class of Darians (dwelling in another part of the spaceship) is manipulating the barbarians. The perfect people they find are actually used for body-part replacement surgery so the pure-breed Darians can be immortal. And those "imperfect" people put in the disintegrator? They are actually the food supply for the pure breed Darians. Thus, the upper-class lives in wealth, health and plenty on their deck, while exploiting the lower class.

At the end of the episode, after the Alphans barely survive disintegration, surgical carving and other horrors, Captain Alan Carter asks Koenig the question posed above. If there had been an accident of that magnitude on Moonbase Alpha, would Koenig have resorted to deceit and guile to keep some Alphans alive at the expense of others?

Koenig's response is a political brush-off: "Remind me to tell you some time."

And that's quite the non-answer, isn't it? I had the opportunity to ask Johnny Byrne about this on one of our many occasions, and he said that Koenig did avoid answering the question, because the answer was obviously...affirmative. To keep his people, his Alphans, alive, he would have done the same thing.

That unspoken reality reminds me of another Space:1999 quote, (from Christopher Penfold's "Dorzak"): "Philosophy doesn't win space for people to live. It is the struggle for survival that makes monsters of us all."
This is such a fine and under-examined element of Space:1999; this discussion of the universe as essentially Darwinian, wherein sometimes you have to choose between two bad options, find the lesser-of-two evils. Again, and I don't mean to come off as rabidly Anti-Trek, because I love the original Star Trek so much, I think the comparison is worthwhile. This is where Voyager utterly failed to capitalize on a good idea.

The Starfleet personnel aboard that ship never had to do without anything; they continued to play happy adventures on their holodeck, they continued to manufacture new shuttles (like the Delta Flyer). They continued to materialize food and material wealth out of nowhere (via replicators). All of this "plenty" is - at its core - in diametric conflict with the very premise of Voyager; that it is a ship alone in an alien part of the galaxy. I like the cast of Voyager very much (I often say it is the finest cast of all Star Treks, save for the original), yet I think this failure to capitalize on the premise is what turned me off the program after a season or two. Here - finally - was a chance to see "noble" 24th century man without his wealth, without his riches, without his toys. Would he live up to the values of Star Fleet when he was poor and impoverished? Do grand ideals hold out when the stomach is empty?
That's what Voyager should have been about; and in fact what Space:1999 was about. As Johnny always said to me, it was fascinating to work on a series that operated from the premise that man in space didn't have what he needed to survive, rather then he already had it all. When I look back at Alan Carter's question, and then Koenig's evasive answer in "Mission of the Darians," I see how precarious the Alphan situation is. We don't always make noble choices when we're hungry, or we don't have a home, or when we're desperate. I remember the criticism of Space:1999 by Star Trek fans during the 1970s was that it wasn't optimistic enough; that the characters were too ready to draw guns or confront aliens with violence.

I wonder, however, if they didn't just miss the boat (or moonbase) with that criticism. Voyager, I submit, sort of proves just how ridiculous optimism is in that particular situation. Voyager didn't have the courage to live up to its premise. Space:1999 did.
at April 25, 2008