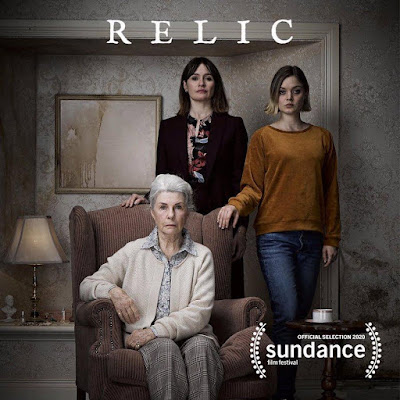 Kay (Emily Mortimer) and her daughter Sam (Bella Heathcote) return to Kay's mother's home in the woods when the elderly lady vanishes. Along with the police and locals, the two search the forest only for Edna (Robyn Nevin) to suddenly appear in her kitchen three days later.  Doctors find her in good physical health, except for a big black bruise on her chest that she has no memory of receiving. As Kay spends more time with her mother, she becomes brutally aware that dementia has set in and that Edna can no longer live alone. Sam is offended that her mother wants to put her grandmother in a nursing home. But something more demonic has settled in the house in the woods and as Edna's behavior becomes more erratic, both Kay and Sam fear that all three's sanity may be at serious risk. 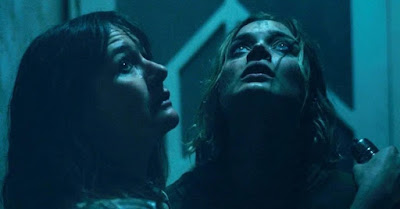 James' film keeps the audience off-balance throughout. The mis-en-scène includes fractured framing, where heads are partially or fully cut off from the camera. Everyday objects appear more frightening than they should, like a pink/red candle being shaved to trick the eye into thinking it is instead lacerated flesh. James pans the camera across images but fades in and out as if the camera eye has slowly blinked. These ruses bewilder the audience so that even when there's nothing scary happening, the spine tingles. The sound design of hissing, scurrying footsteps, and out-of-control household utilities adds to the ripe tension.

Many of the best horror films reflect universal fears: Carrie triggers a youth's panic of puberty; Rosemary's Baby taps into a woman's distress of pregnancy and the body forming inside; and according to Stephen King, The Amityville Horror elicits the anxiety of buying a home you can't afford. Relic will haunt anyone phobic about being abandoned when they're old and conversely anyone who worries about a loved one's slow decent into mortality. The script, by Jones and Christian White, also plays with the psychological terror that mind deterioration can be passed down genetically.

The three main cast members are brilliant at internalizing their horror and each represents three generations of dealing with dying. Mortimer deals with the character's guilt for having been sparce in her mother's life and for now choosing for others to care for her mother now that the situation has become dire. Heathcote finds herself removed from the situation, hence blaming Mortimer's character for the tough decisions she must make. Nevin feeds into the fitful behavior and confusion one feels when losing their faculties.

Definitely a slow burn even at 89 minutes, Relic is an experiment in visualizing a family 's acceptance (or not) of death. Every image reminds the audience that life is temporary, and everyone is deteriorating a bit each day.