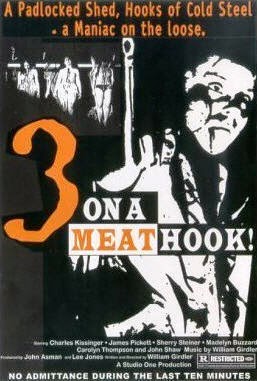 The quaintly titled Three on a Meathook (1973) from director William B. Girdler is a full-on homage to -- or perhaps rip-off of -- Alfred Hitchcock’s landmark film, Psycho (1960).

Like that film (and like The Texas Chainsaw Massacre [1974] as well), the film is loosely based on the exploits of real-life, mid-western serial killer Ed Gein. Girdler’s version of the macabre tale, however, is shot in Louisville, Kentucky, and on a budget of just twenty-thousand dollars. Still, Girdler actually apes the Master’s moves in some key sequences here, though to little avail.

The fledgling artistry evident in the best moments of the admittedly uneven Asylum of Satan (1972), is, alas, not present here to any significant degree. Perhaps this is so because Three on a Meathook arises from a more naturalistic school of horror filmmaking, and Girdler doesn’t seize opportunities to make his film particularly stylish.

In fact, the film is relatively short on close-ups, which saddles Three on a Meathook with a distant or remote quality. This approach makes it difficult to invest in the characters, and without investment, fear cannot blossom.

Worse, the film grinds to a halt during the protagonist’s stop at a Louisville dive, where a local band performs not one but two songs in their entirety. In a film just eighty-minutes in length, that’s a lot of time to lose on a musical interlude.

Other than that, however, the film showcases a sort of developmentally-arrested Girdler, a director still finding his way with actors and visualizations. Call it a sophomore slump. 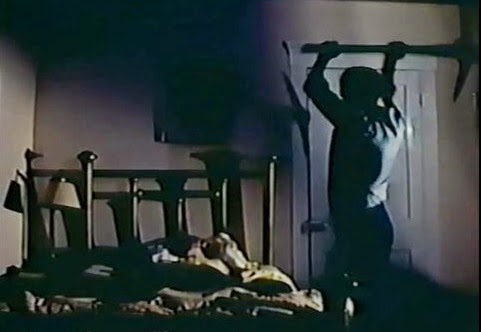 “Let this boy keep his evil to himself.”

In Kentucky, four young women get together at a lake resort for the weekend. When their car breaks down, the friendly local, Billy (James Pickett) offers to help them, letting them stay on his farm for the night. Billy’s strict father, Pa Townsend (Charles Kissinger), doesn’t approve of the arrangement. He worries about Billy’s behavior when he is near women. The boy has never been the same since his mother died years earlier.

By night, an unknown assailant brutally murders all four young women, some in their sleep. Pa blames Billy for the blood-bath and promises to clean up his mess. A guilty-feeling Billy goes to see The Graduate, and then visits a bar to drink away his blues. There Billy meets and falls in love with a free-spirited bartender, Sherry (Sherry Steiner).  He wants to invite her back to the farm, over Pa’s objections.

Sherry and a friend, Becky (Madelyn Buzzard) stay at the Townsend Farm, but Becky is butchered, and a frightened Sherry finds the corpses of the dead girls in the barn…on a row of meat-hooks.

Soon, she is accosted by Billy’s father, who is behind the killings…but for a strange and sinister purpose. 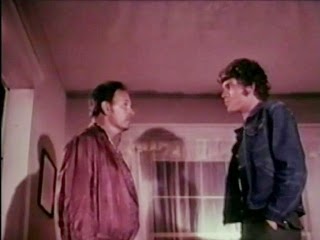 “I tried to tell you, but you wouldn’t listen.”

William B. Girdler has sometimes been termed the movie “rip-off” king because his movies almost universally ape a famous formula or particular film. His Abby (1976) is the “black” The Exorcist (1973). His Grizzly (1976) is essentially Jaws (1975) on land, and so forth. Similarly, one can make the case that Three on a Meathook follows this example.  It is -- no bones about it -- the director’s version of Psycho.

To start with, both films commence with a camera pan across a modern metropolis. In the case of Psycho, it’s Phoenix, AZ, and here it’s Louisville, KY.

Then, immediately following this exterior pan we move into a hotel room, where a sexual liaison is already occurring.  Girdler is able to show more flesh here, however, than Hitchcock was permitted in 1960.  Girdler’s lovers are seen locked under the sheets together, topless. The man is mounting the woman. When the woman emerges from the coupling, she performs the rest of the scene without a bra.

Then, four women go on a trip (as Janet Leigh’s Marion Crane undertook a trip…), and end up at the abode of terror, in this case not a motel, but a farm.

In both instances, the boy-ish host, either Norman Bates (Anthony Perkins) or Billy offer to feed the hungry guests, and in both cases a murder soon occurs in the bathroom.

Here, the shower is not the location of the brutal murder however. A bath-tub does the trick instead. Intriguingly, four victims die during this sequence, and the best moment occurs not in the bathroom, aping Psycho, but in a hall-way where a lightning-fast and well-executed decapitation offs the last victim, and captures the attention.

After everyone in the initial victim pool is dead, a new female lead is introduced (Sherry, in this case, rather than Vera Miles’ Lila Crane). As she goes cross close to Billy, we are left to wonder as to the identity of the killer.  Is it his father?  Or is it his mother, whom we are told died when he was ten years old?

After the murders are resolved, we get, almost note-for-note, Psycho’s talky “restoring order” ending, in which a psychiatrist explains at length the details of the case.  Just as Simon Oakland discussed Norman Bates’ schizophrenia in Psycho, the psychiatrist character here goes on at great length about Pa Townsend’s psychosis.

And finally, in time for the last shot, we get the composition of an imprisoned madman, not Norman, but rather Pa Townsend. This is where they will spend the rest of their days…incarcerated.

From A to B to C, Three on a Meathook leads right back to Psycho. The movie’s “clever” twist, however, is an inversion of Norman’s story. Whereas Norman’s mother was really dead (and stuffed in the fruit cellar) but Norman was pretending she was alive by becoming her, Billy’s mother is believed to be dead, but actually alive.

You see, she suffers from “cannibalistic tendencies” and Billy’s father, Pa, has been murdering passersby (and blaming Billy…) so as to procure meat for his beloved wife. 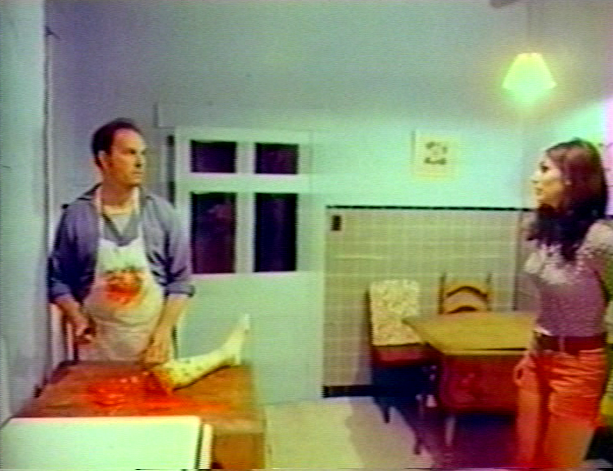 The idea here is not bad: to ape Psycho relentlessly and for as long as possible and then, at the final surprise juncture, reverse a key plot point. But again, Girdler doesn’t do much with his narrative or his twist-in-the-tale that is commendable or even memorable.

The thrill of watching a film like Three on a Meathook, even today, comes from the fact that the film was made outside of Hollywood proper. Accordingly, you are never quite sure how far it will go, or what you will see. Hollywood decorum doesn’t matter in the Girdler-verse, and so you could see something that simply wouldn’t be allowed in an establishment film.

For me, that moment of spiky, nasty invention comes with the aforementioned decapitation. I’ve included the still of that moment, which does it no favors since a photograph reveals how the trick was accomplished. 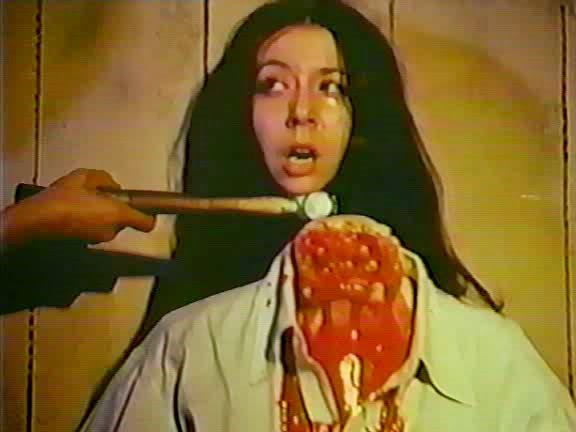 But on film it all happens so fast and is so nasty in conception, that the moment is momentarily shocking.  The film could have used more moments like this one, and less like the unnecessary musical interlude.  The decapitation gag, rough as it is, deserves a mention because Girdler always sought to give audiences their money’s worth, and took apparent glee in creating weird and experimental effects.  The apex of that trend comes in The Manitou (1978) which boasts some very inventive, very ingenious and very weird visuals, but you can trace a line backwards from there to Three on a Meathook. Everyone starts somewhere.

Outside the decapitation gag and a nicely-shot “discovery” moment of revelation with three corpses on the aforementioned meat-hooks, however, the film feels flat and remote, as if we’re watching the whole thing from a distance.

This approach actually diminishes the sense of horror, rather than augmenting it.  If Girdler could have aped any characteristic of Hitchcock’s, it should have been the master’s devotion to formalism, and the desire to make the audience feel -- through film grammar -- real terror.  Similarly, The Texas Chainsaw Massacre plays like some surreal, bizarre version of Alice in Wonderland, in a world where order is unsettled, and never restored. By comparison to either masterpiece, Three on a Meathook is very, very flat.
at June 30, 2020