Buck Rogers: "Mark of the Saurian" 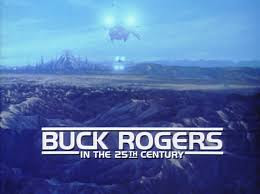 Just as an armistice has been declared between the Directorate and the Saurian Empire, a group of Saurian nationals masquerade in human form, as Ambassador Cabot (Linden Chiles) and his party.

Cabot and his team board the Searcher, and plot to take the exploratory ship into the “restricted zone” near the Delta Quadrant Defense Station.  The Saurian plan is to secretly seize control of that station, a weapon so powerful it caused their people to seek peace.

Buck (Gil Gerard), suffering from “Cygnus Fever,” is able to detect the Ambassador and his party as they really are: alien infiltrators.

Although Wilma (Erin Gray) believes Buck’s story, the Searcher crew fears that Rogers is delusional, and even dangerous. They try to keep him in bed, and sedated, while the Saurians seek to stop him.

Meanwhile, Buck attempts to convince his friends that the Saurians are playing the crew for fools… 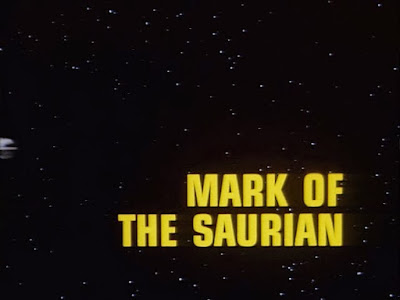 Fans of that series will certainly remember a Year Two story and two-part episode, called “The Bringers of Wonder.”  There, Commander John Koenig (Martin Landau) is injured during an eagle crash, and consigned to Medical Center. While there, he undergoes a head-injury treatment that alters his brainwaves.

At the same time, a ship apparently from Earth, a super swift, nears Moonbase Alpha.  It is manned entirely by friends of the Alphans, including Dr. Shaw, Helena Russell’s (Barbara Bain) mentor.

But when Koenig awakens, he doesn’t see human friends from Earth, he sees “monsters from another dimension” who are operating by their own malevolent agenda (a plot to detonate the nuclear waste domes on the moon).

Koenig attempts to convince his friends that he is not delusional or hallucinating, but they fear his injury is affecting his mind. He is out of his head, so-to-speak.

The points of similarity between the two stories are suspiciously numerous.

In both cases, we have the protagonist or hero of the show dealing with an injury/sickness. Koenig has a brain injury. Buck suffers from Cygnus Fever.  This is important, because this “condition” is the excuse by which his subordinates fail to heed his warning about enemy infiltrators.

In both cases, one of the key alien infiltrators is a doctor or physician, an individual with access to the sick bay/Medical Center, and so can therefore attempt to harm the sick protagonist.  It was Dr. Shaw in “Bringers of Wonder,” and Dr. Moray in “Mark of the Saurian” who commit this act.  They both seek to stop the one person who can see the invaders as they really are.

In both cases, a man whose word is absolutely dependable is easily questioned because of the prior incident (brain injury/Cygnus fever), leaving that man to have to act alone, without the support of his friends. 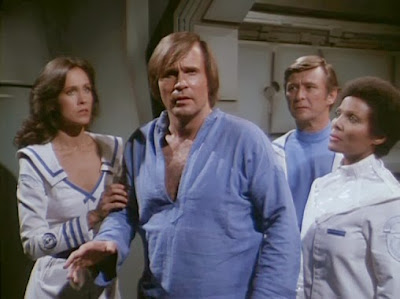 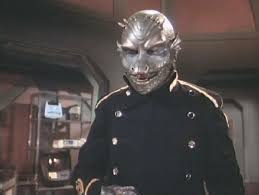 In both cases, the aliens with the secret agenda (to detonate the domes; or take over the Delta Quadrant Defense Station) are only outed when the protagonist manipulates an instrument in the control room to alter the conditions of that room and make the aliens visible to shocked co-workers.

In “Bringers of Wonder,” Koenig uses sonic manipulation in Command Center to allow the Alphans to see the “earthlings” as he sees them...as slimy aliens.

In “Mark of the Saurian,” Buck adjusts the thermostat on the Searcher’s bridge, making it cold.  The Saurians -- who are cold-blooded -- collapse, and when unconscious, appear in their true, reptilian form.

In sci-fi TV, many stories are influenced by older stories.  Many series offer variations on a theme, or on a trope (like “the silicon based life form,” or the “fight to the death.”)  But “Mark of the Saurian” isn’t a variation on a theme so much as it is a straight-up regurgitation of “Bringers of Wonder.”  It is a point-by-point repeat.

That fact established, it’s not a bad episode in the scheme of things. Buck, feeling alone, discovers the two people he can truly count on in a crisis: Wilma and Hawk (Thom Christopher), and the episode helps us glean a sense of those friendships.

On the other hand, some questions are indeed left unanswered.

How do the Saurians trick Twiki and Crichton into seeing them as human beings? They are robots, after all, not susceptible to a disguise device that depends, apparently, on "body chemistry." 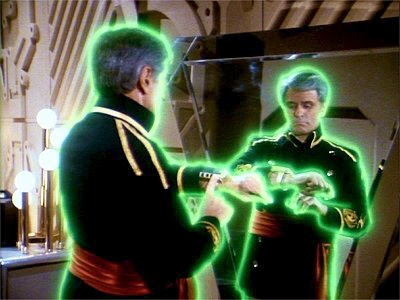 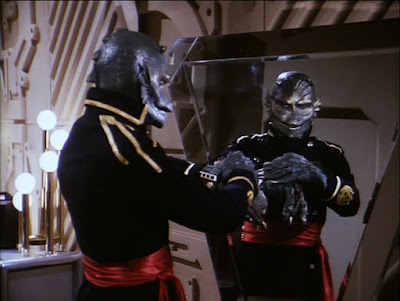 Finally, why is Buck so mean and insulting to his doctor in this episode?  He is the worst patient, ever! 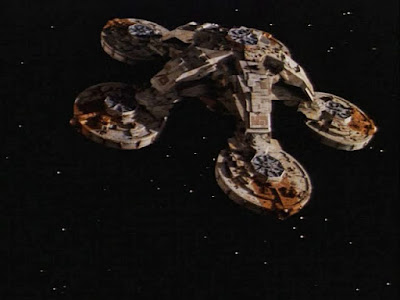 If only we heard a mention of Dr. Huer.

Fans of 1970s electronic toys will also note that Lakeside’s Computer Perfection makes an extended cameo as a view screen control panel in Searcher’s sick bay.  The unmistakable blue and white toy is seen several times at Buck’s bedside, and there are two close-ups of the game’s controls (under a blue hood). 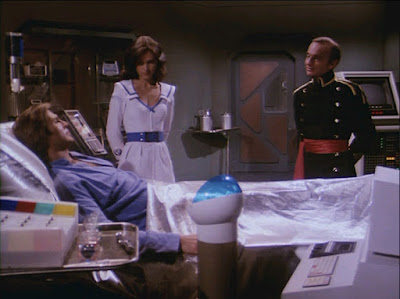 Finally, one might wonder how I can enumerate all the similarities here to Space:1999 and yet still assess this Buck Rogers episode as one of the better second season shows.

The answer is simple.  By comparison to efforts like “The Golden Man” or “Shgoratchx!"even a retread like “Mark of the Saurians” is a welcome relief.
at February 04, 2020