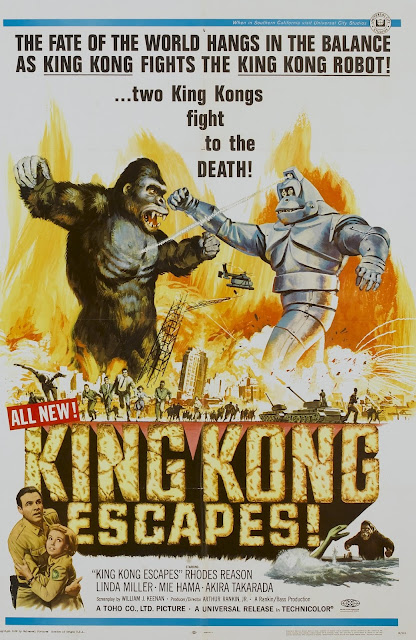 A conniving scientist and madman, Dr. Who (Eisei Amamoto) is in league with a foreign government, and its agent, Madame Piranha (Mie Hama) to mine the valuable substance Element X from the North Pole.  Element X will make the production of nuclear weapons fast and easy.

To mine the harmful and radioactive element, Dr. Who has stolen Commander Carl Nelson’s (Rhodes Reason) plans for a giant robot based on the legendary monster, King Kong. Dr. Who builds the robot, which he dubs Mechani-Kong, but it fails in its first mining test.

The giant gorilla saves the team from a giant dinosaur, Gorosaurus, and takes an instant liking to Susan. When the trio attempts to leave the island in a hovercraft, Kong pursues, and fights a giant eel.  He traps the submarine until Susan convinces the beast to release them.

Meanwhile, Dr. Who realizes that he must capture the real life King Kong, and have the beast complete the mining operation. To facilitate Kong’s cooperation, he captures Susan, Nomura and Nelson and brings them to his facility in the Arctic.

Kong breaks free while mining Element X, and flees for Tokyo. Mechani-Kong pursues, planning to retrieve him for Dr. Who.  The two Goliaths battle atop Tokyo Tower, while the world watches.

I’ve always greatly enjoyed this Rankin-Bass/Toho contribution to King Kong lore, in part because it picks up on ideas from the 1966 cartoon (episodes of which I’ll review this week).

Dr. Who, Mondo Island, and Kong as a giant, friendly, ally, are all elements that translate from animated series to King Kong Escapes.

Although I don’t at all like how this King Kong looks -- his face resembles the evil yeti in Rudolph the Red Nosed Reindeer (1964) -- I love the design of Mechani-Kong, and also appreciate that the giant ape is back in his pre-King Kong vs. Godzilla (1962) form. That means he doesn’t consume and conduct electricity.  That was a weird touch, but necessary, I suppose, to make him a challenge for the true King of Monsters, Godzilla. 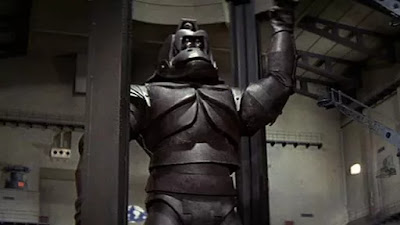 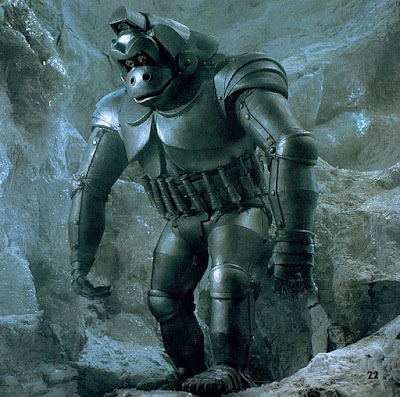 What’s intriguing, again, is that filmmakers attempt to “ape” (pardon me…) the story that started all, from the 1933 film. Here, Kong again grapples with a dinosaur (Gorosaurus instead of a T-Rex), falls in love with a gorgeous blond woman, and climbs a large building, in this case the 1100 foot high Tokyo Tower. However, the big difference is that he survives this adventure.

In some sense, all iterations of King Kong are all -- more or less – about exploitation of nature.  Carl Denham wants Kong to entertain the masses (and make back his investment, in the 2005 remake). Fred Wilson wants to bring back Kong as a mascot (and as an excuse for failing to find oil) in the 1976 version.

Even Mr. Tako of Pacific Pharmaceuticals in King Kong vs. Godzilla sees the giant ape as a cash cow, a publicity stunt.

King Kong Escapes keeps that tradition going. Here King Kong is captured and forced to mine a radioactive element that will ultimately have a deleterious impact on his health.

In all these outings, it should be noted, Kong is forcibly ripped from his island home, and taken to a destination entirely against his will. This makes him very different, from Godzilla, who shows up on Japan’s shore like a force of nature, a tsunami or hurricane.  Instead, Kong doesn’t leave home willingly. He is taken from it; torn from it. He is the reluctant warrior, or king.

When he turns for Mondo Island after destroying Dr. Who’s ship at the end of King Kong Escapes, the beast states  -- as interpreted by Nelson -- that he has had “enough of what we call civilization.”

I’ve always loved that closing line. It’s memorable (and King Kong movies are also known for memorable closing lines such as “It was Beauty killed the Beast…"), and it captures something of Kong’s innocence and wildness. He doesn’t belong in our world. His love -- for Ann, for Dwan, for Susan, etc. -- pushes him into our world. But it’s not his home.  Civilization would rather exploit him than treat him well.

King Kong Escapes does possess some ultra silly moments. First, it is weird that Kong perfectly understands every word that Susan utters. Whether she is dubbed in English, or speaking Japanese, he is able to grasp human language remarkably well.

What’s truly crazy is that when Dr. Who subjects Kong to “hypnotic susceptibility” Kong also understands all the doctor’s instructions.  When he tells Kong “you must dig faster,” the big ape apparently comprehends the meaning perfectly.

King Kong Escapes resolves, basically, on Tokyo Tower, with Kong and Mechani-Kong duking it out.  It’s a good final battle, true to Kong tradition, and the punctuation is perfect. What is that punctuation? The robot breaks into pieces as he hits the ground.

Still, there's a part of me that hates to see Mechani-Kong die. I would have loved to see the licensing issues around King Kong and his robot double resolved so that both monsters could have made additional appearances in the Toho Monster Universe.
at November 28, 2019