In "Buck's Duel to the Death," Buck (Gil Gerard) is enlisted to save the planet Katar from its sadistic despot, The Traybor (William Smith).

The Traybor regularly captures the eligible young women in the populace to serve in his harem, and murders the people's warriors for sport. The Traybor is considered invincible, even by the leader of the people, Darius (Keith Andes).  Darius's own daughter, Maya (Heidi Bohay) has even been captured by the Traybor.

An ancient legend of Katar involves the 500 year old man, the "Rochon," who can destroy the Traybor.  The people of the planet believe that Buck is the living embodiment of that legend.

Reluctantly at first, Buck works with the people to stop the Traybor.  He realizes a twentieth century advance (electricity) holds the key to stopping the warlord once and for all. 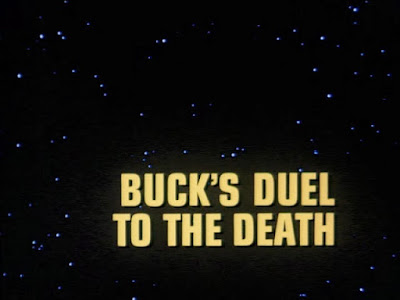 A vast improvement over "Space Rockers," "Buck's Duel to the Death" is a fun, action-packed episode of this 1970's space opera.  It treads on some cliches already featured on the series, namely that Buck is the one and only person in the galaxy who can solve a particular problem. It also possesses some intriguing allusions to other sci-fi series of the era. 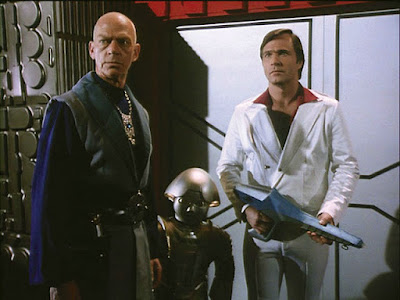 For example, an episode of Space:1999 - Year Two is called "The Taybor" features some intriguing similarities in character names. That 1999 episode involves an alien who abducts Moonbase Alpha's resident alien, Maya (Catherine Schell).  Here, Buck faces an adversary similarly named "The Traybor," and that adversary captures a young woman named...Maya.

The episode culminates with the one-two punch of a well-edited and expensive-looking laser fire fight in a hangar bay, and Buck's inspiring speech to the people of Katar.  Ironically, the fight is better than the speech.  Gerard's delivery to the people, over a planet-wide transmission, is joyless, emotionless, and suggests that the actor was pretty much miserable at this point in the series run. This is better material than he has had in a while, but Gerard sleepwalks through the speech.

Again, watching the series today it is impossible not to register the disconnect between the character and the actor.  The character is supposed to glib and fun-loving (Burt Reynolds in Space!), but Gerard is serious, even grim in the role, especially in the latter-half of the season. The second season, which is widely despised by fans, features a more serious Buck, and one in more in tune with Gerard's persona and gravitas. 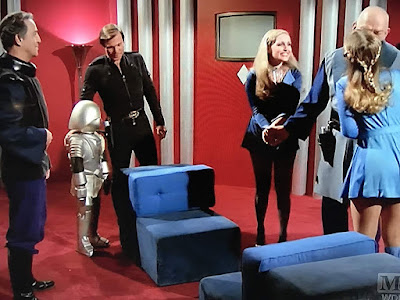 Despite the lackluster speech of inspiration, "Buck's Duel to the Death" is a lot of fun, with space harems, alien warlords, and Buck's ingenious last-minute plan to reflect the Traybor's built-in energy generator (using Twiki to conduct electricity).  It's a fun, fast-paced show, and, in contrast to "Space Rockers," one that doesn't make the regular viewer cringe in embarrassment.

For those keeping track of props re-used from Battlestar Galactica, "Buck's Duel to the Death" has a doozy -- the Galactica shuttle live-action set/prop. It would also re-appear in the second season story "Journey to Oasis," as a Searcher shuttle.

Next week: Season One comes to an end with a two-parter, "Flight of the War Witch."

"The sea does not belong to despots. Upon its surface men can still exercise unjust laws, fight, tear one another to pieces, and be...