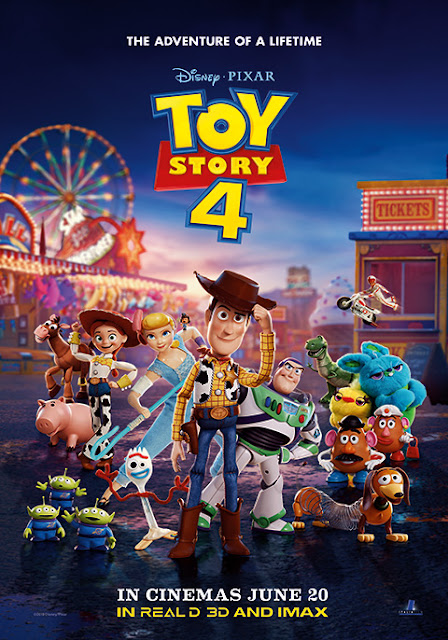 Sympathy for the Spork

Pixar animation has a ginormous gift. Their scripts lead audiences to invest in anthropomorphic creatures. In Toy Story 4, they push that to the limit by co-starring a plastic utensil with two googly eyes, pipe cleaner hands, and sticks for feet.

Because of consistently strong writing and invested characterizations from some of the best actors in the business, this fourth film in the series feels as fresh and new as the other three films. 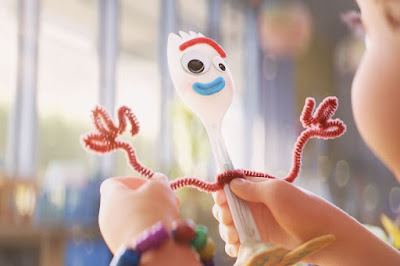 Now that Andy has grown up and granted his family of toys to little Molly, our gang of dinosaurs, cowboys, slinkies, and dolls continue to make their child's adolescence as happy as possible. Though Molly has gravitated towards the other dolls more than Woody (voiced by Tom Hanks), being a stand-up toy, Woody keeps Molly's needs in the forefront. During a traumatic day in Kindergarten, Molly creates a new toy, a personified spork she nicknames "Forky" (Tony Hale). Woody recognizes Forky's importance to Molly's happiness, so he sets out to keep Forky safe during a cross-country road trip. Both toys get lost and Woody recruits some friends, old and new, to make sure that Forky remains with fragile young Molly.

Toy Story 4 was obviously a labor of love for Pixar since many members of the team contributed to its fruition. Besides all the returning cast members (including the late Don Rickles, whose family helped the creators assemble dialogue for Mr. Potato-Head from Rickles outtakes), the film was directed by Inside Out writer Josh Cooley and co-written by Wall-E and Finding Nemo director Andrew Stanton, along with newcomer Stephany Folsom. Though a simple story and one with themes fostered in the earlier films, Toy Story 4 devotes energy into showing its characters evolving, while still staying true to themselves. The friendship between Woody and Buzz (Tim Allen) has been consistent for several films, instilling in children the value of backing up your friends. For that matter, the lessons learned here, that protecting your friends and family do not require you to receive rewards on your own to be worthwhile, are wisdoms our entire society needs to absorb. 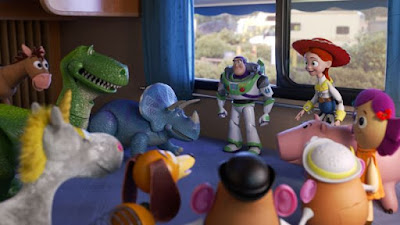 The animators continue to shape the characters around the actors' personalities and vice versa, so that it’s a perfect synergy. Newcomers Jordan Peele, Keegan-Michael Key, and Keanu Reeves seamlessly become members of the posse while Annie Potts returns as Bo Peep to give a new spin on the concept of lost toys. Christina Hendricks voices a new character Gabby Gabby as a complex antagonist, Machiavellian but achingly sad.

The animation takes the different textures of the creatures, porcelain, glass, plastic, felt, and makes them all pop on the screen. The amusement park setting, with flashing lights and moving rides, is a master-class in action animation.  The villainous henchmen move like on springs, spasming a-rhythmically as they walk, which adds another dimension of creepiness to them.

A delightful continuation, Toy Story 4 is a heart-felt, earnest and hilarious summer feast for the entire family.