A space probe is unexpectedly destroyed in orbit as it removes orbital wreckage/garbage (including Apollo 8!) from standard SHADO flight paths. The culprit in this apparent "accident" is actually an alien space device which attaches itself to spaceships in Earth orbit, after hiding in the "space junk."

Commander Straker (Ed Bishop) wants the International Astrophysical Commission, led by James  Henderson (Grant Taylor), to clean up the debris field surrounding Earth, but Henderson refuses to do so, even though the debris is imperiling SHADO operations. They clash verbally over their difference in opinions. 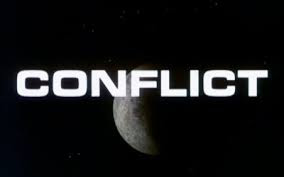 Soon, a lunar shuttle, commanded by Steve Maddox (Drewe Henley), is also destroyed by the hidden alien device, but Henderson isn't interested in helping. He merely wants Straker to lose his job. On Moonbase, Colonel Foster (Michael Billington) works with Straker to force Henderson's hand, even though all flights from the moon to Earth have been shut down... 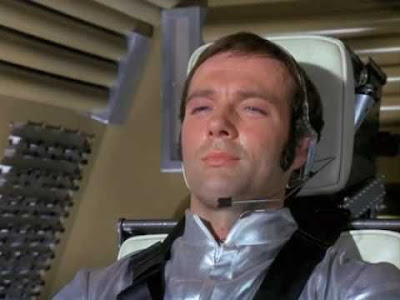 "Conflict" is a fascinating episode of Gerry and Sylvia Anderson's UFO because it recognizes and accounts for a key element of human life: politics.  In many space adventure series, an episode like "Conflict" would be about one dramatic element: the alien device hidden in the space debris, and the attempts to destroy it, or prevent it from exploding additional SHADO spacecraft. The focus would be on the alien danger, and the adventure.

Instead, however, "Conflict" realizes the real impediment here is not the actual nemesis of Earth, the alien device, but our own human politics.  Henderson does not want to commence a "space clearance" mission because it is expensive. Furthermore, he boasts a personal agenda for wishing to see such a program fail. He is jealous that Straker is commander of SHADO. He feels he is the right man for that job, and therefore is willing to sacrifice lives to make Straker look like a failure. To him, winning isn't about defeating the aliens, it is about humiliating and destroying another man, Ed Straker. 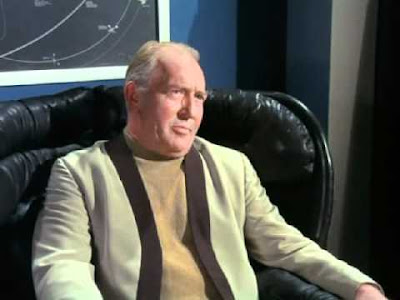 Accordingly, Straker must not only outwit the alien intelligence in this episode, he must outmaneuver Henderson and his political agenda. It is rewarding to report that Straker is equally cunning on both fields of battle, and that this is the episode that clearly establishes that fact. He refuses to "swap dollar signs" with Henderson, since Henderson uses his budget as a defense or not removing the space debris. And then Straker willfully and knowingly violates the no-fly rule, with Foster's cooperation, to force Henderson's hand.  By the end of the episode, Henderson knows he has been soundly defeated, and he has no choice but to clean up the space junk.

This whole political dynamic reminds me of a line of dialogue from Space:1999, another Anderson space series set in the near future. There, in an episode called "Dragon's Domain," a commissioner reminds Commander Koenig (Martin Landau) that the reality of space travel is that it is expensive. Again, that is not at all a comment one is likely to see spoken in either Star Trek or Star Wars. The Anderson space dramas of the early-to-mid 1970's, however, were far more realistic and less romantic in approach to the topic of space travel.  They seem to suggest that our technology will improve, but that politics and bureaucracy are constants. Space travel is always going to be expensive, and competing individuals will always jockey for a dominant share of the available money, sometimes only so they can see others fail. This is an ugly, but perhaps inescapable aspect of human nature. 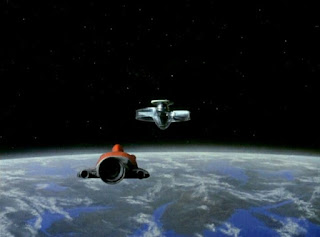 It must also be noted that "Conflict" is extremely forward-looking in terms of its "threat of the week."  And I don't mean the alien device, either.

Instead, I'm talking about a self-made problem; the fact that decades of space junk make Earth orbit a hazardous place for our brave and intrepid astronauts. I remember going to a planetarium not two years ago, and watching (on the IMAX type screen) a movie about space junk in orbit, and the kind of damage it can do to current space travelers and programs.

UFO, produced fifty years ago, recognized this byproduct of the space age early on.Defunct satellites and cast-off thrust units linger in orbit, fall apart, and become the equivalent of space mines, or space shrapnel. It's not a pretty picture.

"Conflict" features a generic title. Really, any episode of the series could be titled "Conflict," right? However, this episode is a strong one in the canon because it establishes that Straker and SHADO live in a world not only of what we would consider "science fiction" (with aliens and flying saucers), but a world of reality, with petty, bickering politics, and real, science-based problems (such as the space junk). Because of this dynamic, "Conflict" is actually one of the series' finest episodes. "Conflict" establishes (or perhaps, reinforces) so clearly the Anderson dynamic of "the future" (also seen in Year One of Space:1999).  What is that dynamic? We will reach the moon and the stars, but our politics will come with us.

Next week, another absolutely brilliant episode of UFO: "Confetti Check A-OK."
at February 26, 2019