In "Ghoul School Days," Sigmund decides to run away, so he won't cause the boys any more problems. He is afraid of getting them into trouble and wants to "make it on his own."

Meanwhile, the monsters in Sigmund's cave are visited by the principal of the Ghoul School,  who warns them that Sigmund has not been showing up to school. According to sea monster schools, at least one child per family must attend school. If Sigmund doesn't return, then one of the other brothers -- or Big Daddy -- must go in his place, and that's something they don't want to do. 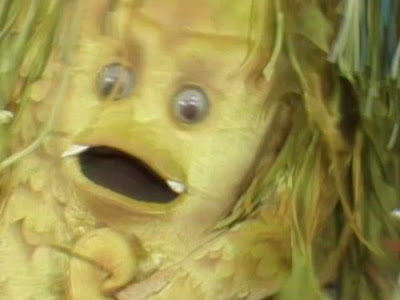 Well, there's a problem here. Last week's Sigmund and the Sea Monsters (1973-1975) was a rehash of a Bugaloos episode. And this week, we get another rehash from the same Sid and Marty Krofft series.  In "Today I am a Firefly," Sparky (Billy Barty) runs away from his friends in the Tranquility Forest to prove he can make it on his own, and not be a burden. That is exactly Sigmund's journey this week.

Beyond this issue, however, the episode is not bad. We learn for instance, that Zelda's last name is Marshall...the same name as the stranded family in the Marshall series Land of the Lost (1974-1977).  Is Zelda related Rick, Will and Holly?  I'd like to think so.

Also, this episode gives the audience a new monster costume, for the Ghoul School Principal.  The monster looks like a sea monster school marm, and the costume must have come at some expense to the production.

There's also a Godzilla joke here, keeping with the idea of a culture of diverse monsters (supported by episodes featuring the Wolf Man, and The Frankenstein Monster). In this case, Mr. Godzilla is Sigmund's home room teacher.

Finally, as usual, the episode ends with Johnny singing only a tangentially-related song (another hold over from The Bugaloos). 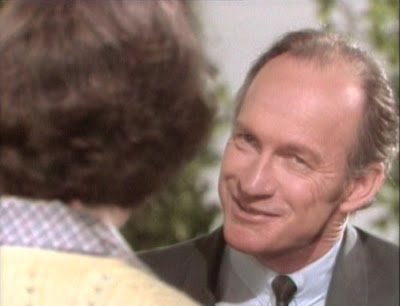 Another notable aspect of this episode: Walker Edmiston, who plays Enik in Land of the Lost appears this week, out-of-costume, which is a rarity in Krofft lore. I interviewed Edmiston back in the year 2000, and he was one of my favorite interviewees.  He would break out into various character voices during the conversation, and was a true gentleman.