The Super Friends huddle in the Bat Cave in shock, as the latest Legion of Doom gambit takes a powerful emotional toll on the Justice League.

This crisis all began when the Legion of Doom members, posing as oil company employees, excavated a deadly canister of Noxium that had been buried under the Hall of Justice.

After acquiring the weapon,the Legion tricked Superman into opening it. Inside is a poisonous crystal.

With the deadly weapon in hand, the Legion proceeded to attack Paradise Island. There, Cheetah killed Wonder Woman.

At another location, Superman had to rescue Lois Lane, only to die, apparently, in the attempt, because of exposure.

The deadly Noxium gives The Legion of Doom"The greatest victory" it has ever had.  But the Super Friends have one last trick up their costumed sleeves. 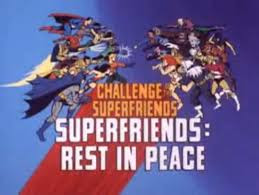 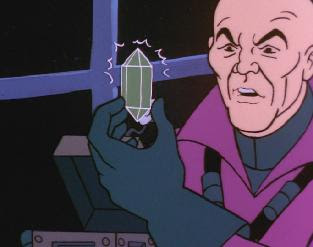 "Super Friends: Rest in Peace" is a really fun episode of this Saturday morning series. It features an exciting  point-of-attack: the death of Batman, and then works backwards to explain what has occurred.

The story is surprising, and fans get to see superheroes dying, which is an unusual sight, to say the least, for a kid's show.

I also adore this episode because it pulls in characters from the individual hero universes. For instance, we see Commissioner Gordon, from the Batman mythos.  And, of course, we get to see Lois Lane, at the Daily Planet, too.

The final deus ex machina involves the death of these beloved superheroes.  They aren't dead at all, but super duplicate robots!

It's a little far-fetched, but it is consistent with what we see on screen, and so it works.