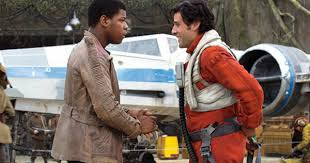 “John, what do you think about J.J. Abrams’ promises for inclusion of a gay character in the Star Wars franchise? I see it is a good sign and hope you do too." 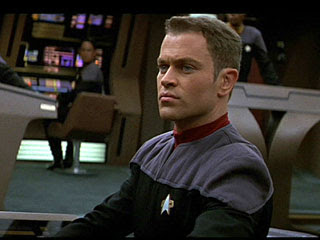 I did see that article you linked me, when it came out way back in 2016. But I would beware of reading too much into that statement.

Abrams actually said, merely, that it was counter-intuitive to suggest homosexuality doesn't exist in a galaxy far, far away.

He didn't say he was actually creating a gay character to be featured in the films. We didn't see one in The Force Awakens (2015), or in Rogue One (2017), after all.

I think it would certainly be appropriate to feature a gay character in Star Wars -- and not just in the books, but on screen -- yet I think it is going to be tougher to do it in this particular franchise than it has been to add a gay character to Star Trek (both in Beyond [2016] and the upcoming Discovery [2017]).

Why? Well Star Wars is this big, generic, monolithic entity that already struggles to develop characters adequately while moving the overall plot forward.

Who was really satisfied, for example, with the information we got about Han and Leia’s marriage in The Force Awakens?  The relationship was managed satisfactorily, but I wouldn’t say it was handled with any sort of complexity or depth.

So how is the franchise going to find time to include a gay protagonist or antagonist, and explore his or her character?

That could happen, sure, but given the time constraints and the franchise ownership by Disney, I suspect it’s a no go.  Economic interest, in this case, is going to trump the desire for diversity.

I guess it could happen that we to get in Star Wars an update of the Lt. Hawk paradigm from Star Trek: First Contact (1996).

As you may recall, we kept getting reports that the character was going to be gay, but when the movie was released there was no discussion at all of his sexual orientation. We were simply supposed to speculate and wonder, I guess.

I could see Star Wars featuring an enigmatic, stoic new character, and the press getting “leaked” reports that he or she is gay or lesbian, but with no acknowledgment of this fact in the film itself.

Here’s another pertinent question: does J.J Abrams strike anybody as particularly brave or forward-leaning in terms of his creative choices in major tent-pole franchises?

I like and enjoy his work a great deal but his primary mode, it seems to me, is sort of generically paying respect to pre-existing, classic properties such as Mission: Impossible, Star Trek, and Star Wars.  All his films are enjoyable and entertaining, but they aren’t exactly the tip of the spear in terms of societal innovation or progress.  Instead, they rely a great deal on feelings of nostalgia.

Past is good prologue in this case. How many openly gay characters have appeared in major roles in J.J.’s blockbuster films so far?

I may be forgetting somebody, but I think the answer is…one (Sulu in Beyond, which Abrams did NOT direct).

Which means that Abrams' desire to be inclusive in Star Wars, going forward, deserves serious and continued scrutiny.


Don’t forget to ask me your questions at Muirbusiness@yahoo.com
at May 22, 2017