Ask JKM a Question: "Versus" Movies? 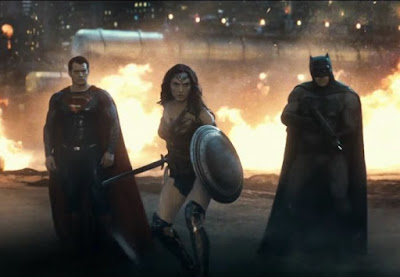 "I was wondering what you think about all the ‘vs’ movies.

Good for movies or bad?  What say you?”

David, that’s a great question, and it gets to the crux of my perpetual conflict on the subject.

I grew up with “vs” movies, as you call them. Specifically, films such as King Kong vs. Godzilla (1962).

So I do have a fondness for them, as a fan. I can't honestly deny that fact.

It is, however, an irrational, nostalgic fondness.

Basically, what happens is this: two franchises that I love get thrown together in a blender. What emerges is usually less than the sum of the ingredients.

The characters fighting come from separate and therefore incongruent realities.  Batman could never, without a certain set of events occurring, be a match for Superman.  Similarly, Godzilla has atomic breath, and would annihilate King Kong in searing, momentary flash of light.

And if Jason goes to sleep, Freddy would have him for breakfast.

There's really no challenge, except one created artificially, and for purposes of strip-mining franchises. 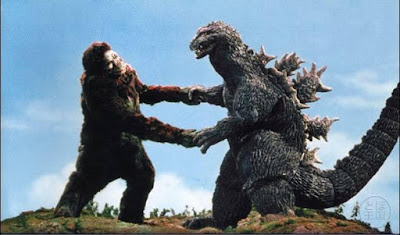 So there’s this fan part of my brain that gets “pinged” when I hear titles like Batman vs. Superman: Dawn of Justice, or about a new version of King Kong vs. Godzilla.  I'm excited!

This is an instinctive, involuntary response.

But then my conscious mind kicks in and I realize that if past is prologue, the truth will be that the movies are probably not going to live up to expectations, or even be particularly good on their own terms.

They’ll handle characters I love on merely a superficial basis, and focus on the celebrity death-match aspect of the action instead of real characterization

By contrast, I really love how Predator 2 (1990) introduces the creatures from the Alien franchise into the Predator world. The connection is established, the viewer understands it, and the movie continues, uninterrupted.

I like that encounter in Predator 2 (with the alien bones revelation in the spaceship…) better than either AVP movie, frankly. If cross-pollination of franchises is necessary, I like the idea of one popular character (like Godzilla) taking on a small, but important role, rather than the whole movie becoming a wrestling match between two Goliaths.

As a fan -- I admit -- I’m absolutely tantalized by the promise of these match-ups. I read recently about the idea of Hellraiser vs. Halloween.

It sounds great on first blush.

But then I think, analytically, how difficult it is to make just a good Hellraiser or good Halloween film on its own.

So suddenly I’m supposed to have faith that both those franchises can be handled properly…in one film?

Again, the tide of history suggests we wouldn’t really like the outcome, some exceptions not withstanding.

And a bad "versus" movie can kill two franchises with one stone.

You also ask if these versus movies are good for movies in general, as an art form.

I think the answer, over the long term, must be negative.

The first few will probably make a lot of money, and then people will realize that “vs” template is actually just a way to sell us on more, endless superhero movies, or answer questions we would have better off left in our imaginations.

Is it really necessary, after all, to know who would win in a battle: The Terminator or RoboCop?

So I worry that "vs." movies are the new "reboots," or "prequels," a "fresh' way to squeeze money from creatively exhausted series.

Let's have some new, original movies instead.


Don’t forget to ask me your questions at Muirbusiness@yahoo.com
at June 13, 2016