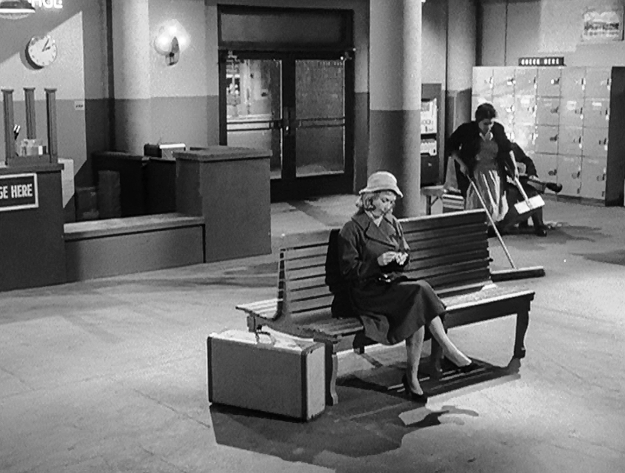 In “Mirror Image,” young Millicent Barnes (Vera Miles) spends the night in a near-empty bus depot, and begins to experience what she fears are hallucinations or delusions.

Specifically, those around her -- including the cranky baggage clerk and the ladies room maid -- claim to have seen her before. And then, later, Millicent sees a suitcase that looks identical to her own.

Millicent grows ever more paranoid about the situation, but her terror reaches a crescendo when she spies an identical double of herself sitting on a bench nearby. Millicent comes to believe -- as she tells another commuter, Paul -- that a version of herself from a “parallel” world has come to this world to destroy her…

Paul dismisses her fears as a mental illness, until he has reason to question his own sanity… 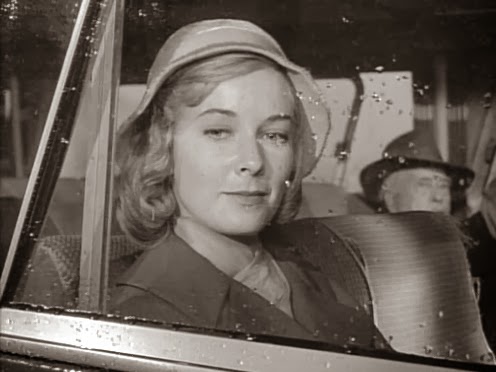 This underrated and yet utterly creepy episode of The Twilight Zone (1959 – 1964) by Rod Serling concerns the notion that “each of us has a twin” in “a parallel world.”

Specifically, unlucky Millicent Barnes is confronted with her own doppelganger, who reveals, when she appears briefly on-screen, a kind of wicked malevolence. There’s a creepy shot of the doppelganger ensconced on the bus to Buffalo, NY, for instance. There’s a smug nastiness about her expression there, and it’s hard to get that smirk out of your thoughts.

“Mirror Image” is set almost entirely on just one large set: the bus depot interior. Although in some hands, this might be considered a limitation, the episode’s director, John Brahms, works wonders with the location.

For one thing, there’s no visual sign of a ceiling in the depot, which means that the walls and doors look exceptionally -- even expressionistically -- large, and the people inhabiting the depot look small and insignificant in comparison.

The clerk -- who turns off the lights for the night at one point -- notes ominously that “this place is like a tomb between now and morning.”

Secondly, the absence of many extras means that the large space of the depot is mostly vacant, so that, again, it seems to defy reality that a malevolent double or “counterpart” could be “hiding” anywhere nearby.

When Paul views his double, for instance, the reverse angles don’t actually match. Paul looks up to see his suitcase gone, and in some of the same space he “occupies” in the frame, the double runs out the door.  It’s like two disjointed worlds are just barely overlapping one another.

Add to these touches the incessant sound of pounding rain outside the depot, and certain visual cues about the danger Millicent finds herself in, and “Mirror Image” builds a powerful and surreal sense, indeed, of the protagonist’s paranoia.

In terms of the aforementioned visual clues, the neon over the ladies room, which read “LADIES” at some points in the episode is seen to read merely “DIES.” 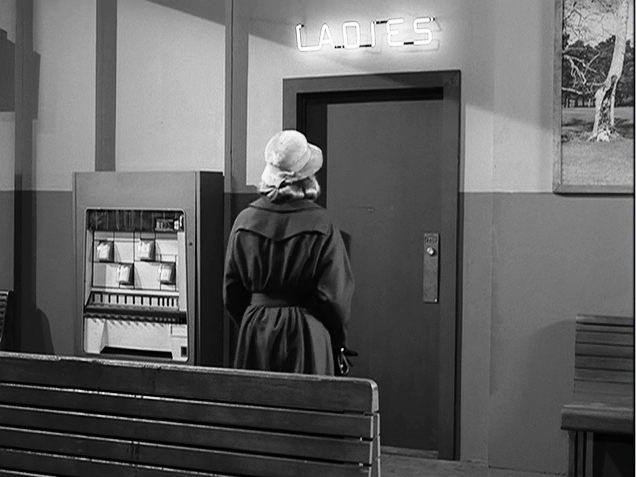 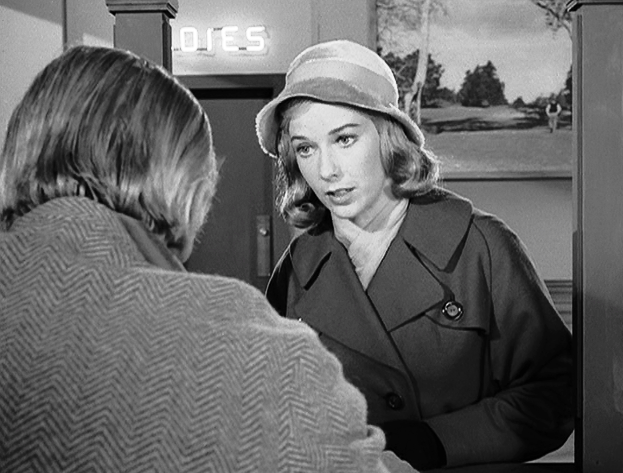 “Mirror Image’s” apex of terror, however, is a nicely composed special effects shot. Millicent gazes into the bathroom mirror -- the door open behind her -- and sees both herself and her malevolent double reflected in the glass. 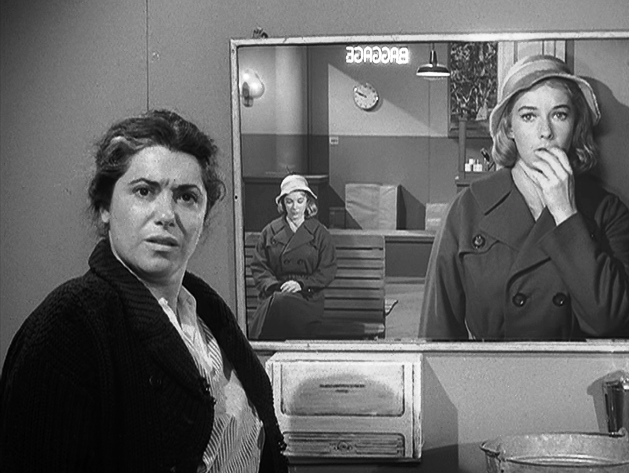 In essence, there should be two Millicents --herself and her reflection -- but instead, and quite disconcertingly, there are four. The moment is subtly disturbing and wrong, and the effects are perfectly executed.

The episode’s kicker is chilling too. The man, Paul (Martin Milner), who consigns Millicent to a hospital, himself falls victim to a double of his own. And again, the double seems utterly unhinged and wicked: laughing and smiling at his counterpart’s plight. Paul gives the doppelganger chase, but loses him, standing alone in the dark, contemplating a world that has gone, frankly, insane. 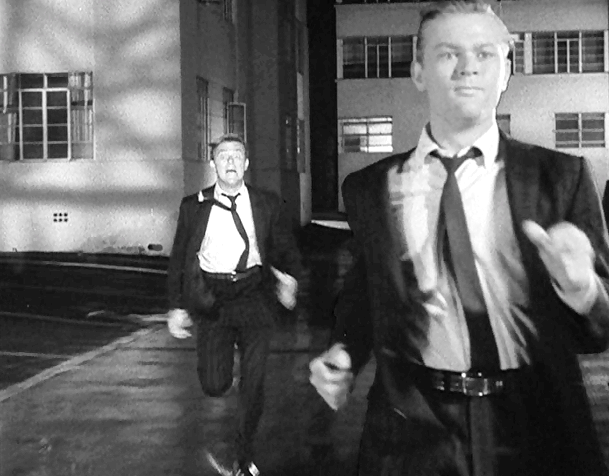 Legend has it that Rod Serling devised “Mirror Image” when he was in an airport, and saw a man dressed like him, carrying baggage like his own. The terrifying thought came to him that the man could be him…after a fashion.  Or more aptly, another him.

There’s an undeniable dream (or nightmare…) logic to that thought, and that dream impulse courses vividly throughout “Mirror Image.” Millicent is told by the clerk at one point that she is “walking in her sleep” and truly, this Twilight Zone installment has the feel of a disturbing phantasm, one that can’t possibly be real, but can’t also be denied…or escaped.
at May 11, 2016