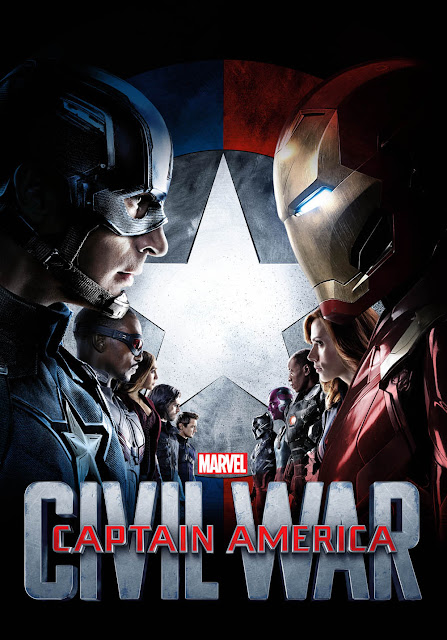 Captain America Gets By With A Little Help from His Friends

The more friends around Steve Rogers, the better.

Chris Evans is a charming looker but his charisma level only goes so far. Both the previous Captain America films were my least favorite in the Marvel Universe, though Evans was quite compelling in both Avengers films. By surrounding him by more members of the team, the creators of Captain America: Civil War have smartly defused the actor's blandness with the more dynamic Robert Downey Jr, Paul Rudd, Don Cheadle, Paul Bettany and Jeremy Renner for a vastly enjoyable action/adventure. 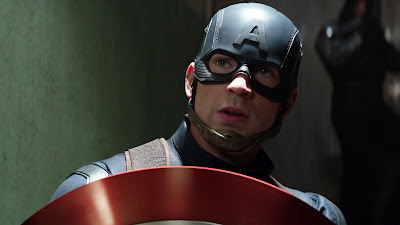 One of Captain America's past nemeses leads him and his friends Black Widow (Scarlett Johansson), Scarlet Witch (Elizabeth Olson) and Falcon (Anthony Mackie) on a death-defying mission to Laos. They disarm the villains but the collateral damage is devastating. The UN have decided an unsupervised Avengers is as dangerous as an uninvolved Avengers. It forces the team to sign a proclamation adding accountability to the superhero's actions.  Tony Stark (Downey) and James Rhodes (Cheadle) accept the flack as a necessary evil and sign, along with Natasha Romanoff (Johansson). Rogers believes that this resolution will cripple the good The Avengers accomplish and refuses to sign.

The team members who were part of the Laos mission stand by Rogers. The line has been drawn and the tension only intensifies when a colleague from the past is, according to Rogers, wrongly accused. Roger has faith that his best friend Bucky (Sebastian Stan), once brainwashed into being the murderous Winter Soldier, is now a good man and couldn't have led the terrorist act of which he's accused. Rogers protects Bucky, and the already volatile relations amongst the Avengers becomes an all-out war. 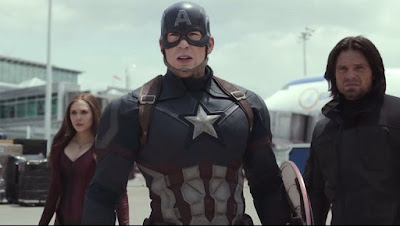 So many action films forgive the heroes a vast amount of collateral damage for the greater good. In the seminal Superman II, Christopher Reeve's character must have himself clocked hundreds of casualties while battling Zod in the middle of Metropolis. Though audiences would not hope that our Clark Kent would go to prison for mass murder when he was doing his best to stop megalomaniacs from destroying Earth, it always seems odd in this and other films like it that no one mentions the "oh well" attitude of major innocent deaths when a hero throws a villain through a building. Cleverly, Civil War brings this factor front and center.

The world acknowledges that The Avengers have saved humanity on multiple occasions, but that being unchecked, they have also devastated cities and torn apart families. The film also shrewdly plays on the concept of guilt and justice vs. revenge. The Winter Soldier is an intriguing proxy for these themes.  Should a decent person being controlled by outside influences be responsible for his crimes?  Would destroying him regardless be considered justice or revenge?

Civil War's first act falters due to convoluted action scenes and cliché after cliché piled upon each other. Scenes, like one between a father and son at the UN, are so overwritten, they not only skywrite the foreshadowing but leave the audience with sore muscles from eye rolling. But once the team separates, both the writing and direction rise exponentially to a superior level. 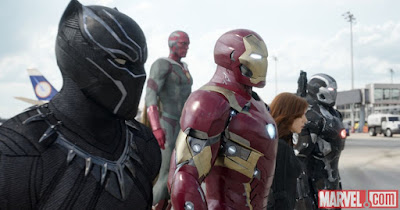 Though they didn't write the film, Directors Anthony and Joe Russo, who rose from several recent brilliant sitcoms Arrested Development, Community and Happy Endings, bring their sense of humor and genius for building camaraderie to the shooting script. The action sequences wherein teammate clashes with teammate are coherent, stirring and lead the audience to empathize with all the characters, no matter the side.

By adding new members to the mix, Rudd's Scott Lang (Ant-Man) and Tom Holland's Peter Parker (Spider-Man), the Russo Brothers and writers Christopher Markus and Stephen McFeely revitalize the group's dynamics. Both Rudd and Holland add buoyancy and flippancy to the combat.

Downey continues to kill it as Tony Stark, both authoritative and egomaniacal in his dealings with his colleagues. Cheadle adds support as Stark's right hand, as does Bettany as his simulated sidekick. Evans is earnest as Rogers and passionate towards his causes. He seems more relaxed when not forced to carry the entire film on his shoulders.

Just as her character tries to find her place as a hero, Olson is still trying to make her Eastern European accent believable. Though she garners sympathy for her character, that accent needs to fade away. The antagonist character is puzzling and unconvincing in his motives, but as portrayed by the always dynamic Daniel Bruhl, Zemo is so captivating and methodical, nobody will care that his reasoning makes zero sense.

Though released under the Captain America banner, Civil War is truly Avengers 2.5 which is partially why it excels as a rowdy, rousing movie. The battle between Tony Stark and Steve Rogers becomes mythic -- Cain vs Abel/Javert vs Valjean -- not just an excuse to pit one franchise against another for no purpose than to make $862.9 million globally (I'm looking at you Zack Snyder and Warner Bros).

Jonas Schwartz is a voting member of the Los Angeles Drama Critics, and the West Coast Critic for TheaterMania. Check out his “Jonas at the Movies” reviews at Maryland Nightlife.
at May 06, 2016