“Battle for Freedom,” the final episode of Jason of Star Command (1978 – 1979) really pulls out all the stops.  The episode features several new miniatures, a grand space battle (with more space craft per shot than we’ve seen before…), some terrific character interaction, and, finally, even a sense of resolution.

In this installment, Commander Stone (John Russell) is intercepted by Dragos while en route to Fleet Command to accept a medal for his outstanding service. Dragos holds Stone hostage and informs Jason, now acting Commander of Star Command, that Stone will not be released unless Jason cedes the peaceful planet Chryton to the tyrant.

Chryton’s prime consul, Jo-neen, visiting Star Command, officially requests protection for her planet. Jason attempts to stall Dragos, leaving Parsafoot in command while he searches the D-2 Star System for Stone.  Unfortunately, the planets in that system have strange effects on humanoids. Jason and Samantha take an antidote created by Parsafoot and head out to rescue their superior officer.

On the planet, Jason and Samantha find Commander Stone, but he has lost his memory. Jason is able to help Stone recover his identity. In part he does so by reminding Stone of Dragos – the man who forced Stone’s people from their planet -- and in part by reminding him that he is “the best commanding officer Star Command has ever had.”

As Jason, Samantha and Commander Stone leave the planet in the D2 system, Parsafoot launches a fleet of Star Command drones to meet Dragos’ attack fleet in space and defend Chryton.  It’s a rout, but the defeated Dragos has one last trick up his sleeve.

He attempts to use a deadly anti-matter ray or “projector” to blast Jason’s Star-Fire into another dimension.  Jason uses a nearby red dwarf to reflect the beam, and Dragos instead is cast away into another reality “for a long, long time.” 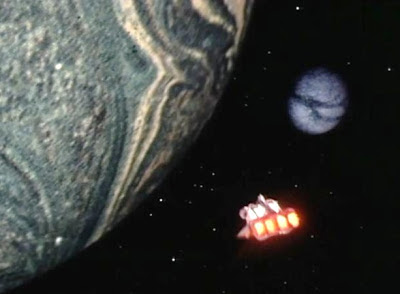 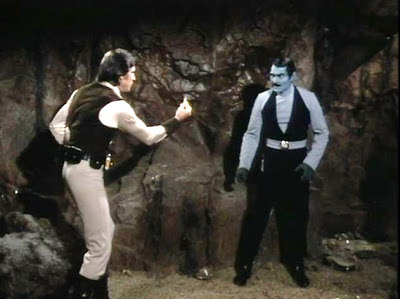 You might expect a Saturday morning’s kid show, at the end of a long season, to do a bottle show or something rather modest, having run out of budgetary resources. Instead, Jason of Star Command goes out in grand style, with a whole host of new special effects and miniatures. For the first time, we see the unmanned Star Command drones, and by the half-dozen, no less. We also see Dragos’ fearsome battle stations in orbit of Chryton.

And, of course, we get the final tango between the deadly Dragonstar and Jason’s zippy Star-Fire.  There are more miniature shots – and of greater complexity – in this twenty-minute segment than in the last several episodes of the season put together. 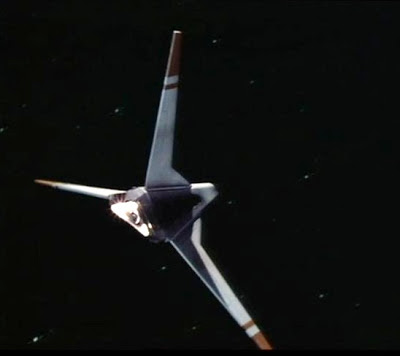 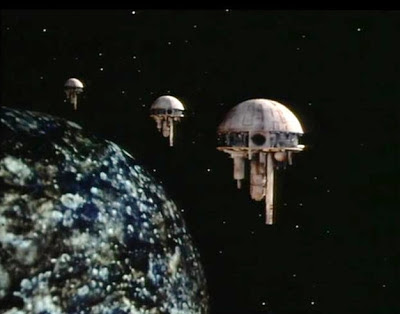 Although certainly the intention would have been to have another season of episodes, “Battle for Freedom” provides a nice sense of closure to the Saturday morning series.

The socially-inept Parsafoot begins a romantic relationship with Jo-neen, and more importantly, Jason and Commander Stone finally seem comfortable with another. They have some nice banter in “Battle for Freedom,” and come to an acceptance, you might say, of their different way of doing things.

They started out as uncomfortable allies at the beginning of season two, and end the same season with a strong sense of mutual respect. In this regard, the cast change from James Doohan as Commander Canarvin to John Russell as Commander Stone really works in the series’ favor. So much so, in fact, I’m inclined to agree with Jason’s explicit assessment: Stone is the better commander.

And, of course, Dragos is finally defeated in this valedictory episode. As the villain disappears, shouting maniacally “some day…Jason…” it’s clear he could return, had the series come back. But as the final episode of the show, the defeat of Dragos also plays as a final victory for the heroes. The scourge of the universe is gone. 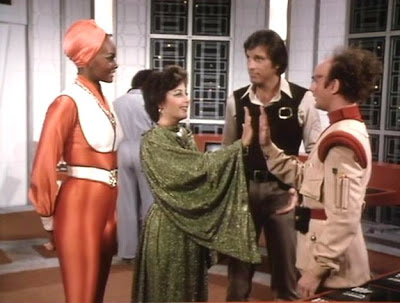 Watching Jason of Star Command today, it never lets you forget it was made for children.  The stories are simple and straight-forward, so much so that they become rather boring at times for an adult.

Yet -- from time to time -- the character interaction is really great, particularly as it pertains to Stone and Jason. More to the point, the special effects remain astonishing examples of 1970s post-Star Wars state of the art.  They compare favorably, in fact, with prime time efforts such as Battlestar Galactica (1978-1979) and Buck Rogers in the 25th Century (1979-1981).

I can’t say I wouldn’t have appreciated more thematic depth in a lot of these second season episodes, but again…these shows were designed for kids, and they're fun.  Adios, Jason!
at April 09, 2016