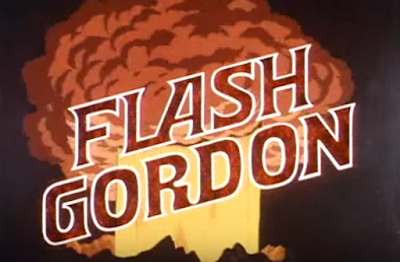 When we last left Flash Gordon, he was trapped deep inside the caverns of Tropica with fugitive Queen Desira, Dale Arden, and Dr. Hans Zarkov. Their enemy, Brasnor, is hot on their heels. A traitor, Brasnor wishes to kill Desira and take her kingdom. To that end, he claims she is an imposter and fosters confusion.

A strange energy pull, however, yanks our stalwart heroes out of an underground pool towards the roof of the cavern. We find out in Chapter Fourteen, "The Desert Hawk," that a meteorite of "superior density" has caused "suspended gravity" and that's why it's all funky in these parts. A giant bat attacks, but Flash knocks it out.

Meanwhile, far away in Arboria, Aura and Barin trade loving words on a castle ledge until interrupted by King Vultan. His "hawk sense" tells him that Flash is in trouble and requires assistance.

Back in Tropica, Flash and the other refugees escape into the desert, their "only avenue of escape," and proceed to get separated. In a time-honored cliche of sci-fi TV, Zarkov sends up "Morse Code" in the form of smoke signals, and Flash deciphers it to find him. Morse code, of course, has popped up in Star Trek, Space: 1999 and just about every other series imaginable…

Together, the heroes encounter Gandar, lord of the desert, a very-thinly disguised corollary for a terrestrial Arab king (he actually wears a turban...). 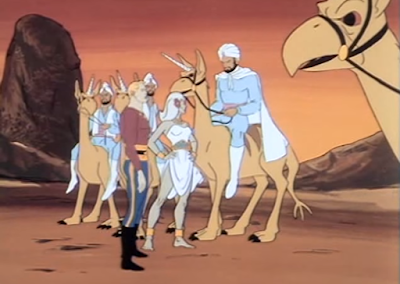 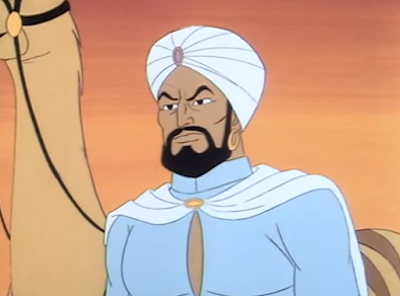 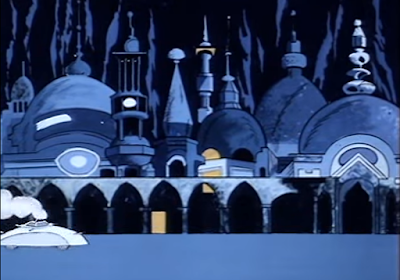 Gandar takes them back to his desert kingdom, which resembles Baghdad (at least what Baghdad once looked like...). There's even a building that resembles a mosque. Together, Flash and Gandar mount a defense of the city against Brasnor, who approaches in a caravan of laser-equipped armored cars.

In fact, that's right. Going back to our World War II metaphor, this episode of Flash Gordon seems to remember that the Axis and Allied Forces didn't battle only in their own lands, but in Africa, and throughout the Middle East. Why?  Resources, for one thing.

Back to the story: the battle looks grim until -- at the last minute -- the cavalry arrives in the form in King Vultan and his Hawkmen (and several Arborian hunters.) Brasnor is defeated and Gandar is impressed. "Earth men never fail to amaze me with their unsuspected abilities," he says.

Finally, Queen Desira is triumphant over Brasnor, and offers her help to Flash in the rebellion against Ming. "Count on my help," she says.

Flash is confident. "No more we do run," he says. "The free men and women of Mongo are coming," adds a roaring Thun.