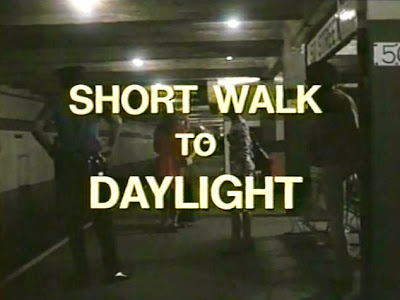 Disaster movies were very much in vogue during the early 1970s, due in large part to the efforts of producer Irwin Allen, the so-called "Master of Disaster."

The Poseidon Adventure (1972), The Towering Inferno (1974) and Earthquake (1974) all proved early box office hits during the decade, and the appeal of such films -- both then and now --  arises in witnessing the varied and colorful human responses to chaos, mortality, and apocalypse.

Some characters in these dramas may rise above their petty everyday problems to survive. Others find the weight of their own prejudices, problems and weaknesses too tremendous to overcome, even in moments of high crisis.

The group dynamic is important too. In most good disaster films, power struggles arise, and group loyalty shifts back and forth.  Who knows the "right" path to survival?  The right fork-in-the-road that will save lives?

One made-for-television movie that exploits this tried-and-true yet still efficacious disaster formula is Barry Shear's impressive Short Walk to Daylight (1972).  The TV movie aired on October 24, 1972 and involves a small handful of subway passengers in Manhattan who, late on a quiet Saturday night, become trapped in a catastrophic earthquake and must escape from the ruined, collapsed tunnels. 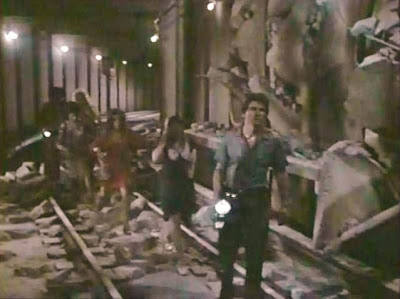 Each man sees the survival of the group as his bailiwick and responsibility. And each man wants to call the shots based on his own knowledge and experience.

Also on the train when the quake hits is a junkie, Jax (Lazaro Perez) and his girlfriend, Sandy (Laurette Spang). We begin the subterranean odyssey with these eight characters, and along the way, their numbers begin to dwindle in crisis after crisis.

The elephant in this subway system, other than the earthquake itself, is clearly racial tension.

As noted above, Tom and Ed butt heads over leadership, and whether to remain in the train, or to seek escape in the tunnel systems.  More plainly, Tom and Alvin also develop an immediate dislike of each other.  Tom takes Alvin for a criminal and thug at first, and Alvin sees only a racist cop who is out to judge him.

As the film progresses, Alvin and Tom confront each other as well as their own prejudices. Although they don't realize it at first, they are each  looking only at a stereotype, rather than the individual.

Desperation grows in the tunnels as several escape routes are blocked, and one tunnel route system under Brooklyn begins to flood.  The group realizes quickly that "no one is digging for" them early on a Sunday morning, under Wall Street, or anywhere else for that matter. If they are going to survive, it's up to them.

A crisp 73 minutes in duration, Short Walk to Daylight makes the most of a small budget by fostering a powerful sense of claustrophobia. After the film's first shot of Manhattan by night, the film cuts to a view of Sylvia and Joanne descending a long flight of stairs.  From that shot on, the film never actually returns to the world of the surface or the world of daylight. 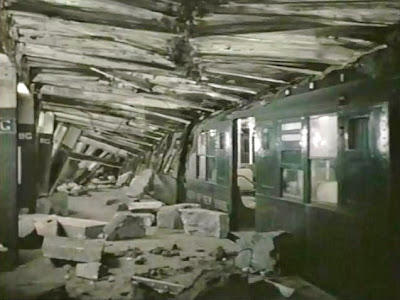 Instead, after the earthquake scuttles the train, the film adopts a shaky cam to present an informal, spontaneous aura to the action. Sometimes, the camera is also positioned behind broken glass, observing characters through a shattered lens, in essence.

This kind of expressive mise-en-scene, along with the minimal lighting and restrictive set confines, grants Short Walk to Daylight a strong sense of disorder, chaos and urgency.

The small, gritty details are appreciated, and worth noting too.  The Iowa girl, Joanne (Bundy) breaks her nose in the quake, and spends the movie with a bloodied face. And Tom's shirt is covered in sweat for the narrative's duration. The persistent overlapping dialogue also adds to the unnerving vibe of a disaster unfolding "as live," essentially.

Short Walk to Daylight is also bolstered by a few impressive effects sequences, thanks to the hard work of Albert Whitlock.

A good matte painting reveals an overburdened tunnel at one point, and near the film's climax, water bursts into the tunnel and gravely imperils the survivors.  One character is washed out to sea in the rushing waves.  It all looks very convincing, and very deadly.

But in the final analysis, what works best about Short Walk to Daylight is the intense, unswerving focus on the eight diverse dramatis personae.

Tom is a good cop, but one who thinks "you can shake people enough," so they'll do what he wants.

Alvin, by contrast, is a man with an overdeveloped persecution complex, and sees the earthquake as yet another one of the daily hurdles in his life to overcome.  "All my life, this city has been coming down on me," he notes, "and all I have to say is let it crumble on down." 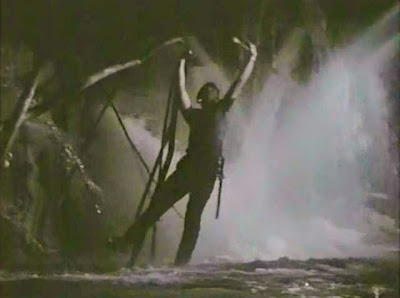 The most sympathetic character in the drama is Abbey Lincoln's character, Dorella, who is slow to trust and like her fellow survivors, and already exhausted from a hard night's work.

The only thing Dorella desires is to be back at home, on a Sunday morning, with her two little boys.  Every Sunday morning you see, she gets to relax, and her children bring Mom breakfast in bed for a change.

There's a moment in the film -- traversing a flooded tunnel compartment -- when Dorella's life is unexpectedly imperiled, and this TV-movie gets you exactly where it wants you. After her monologue about Sunday mornings and her two sons, all you can think about are Dorella's children, facing the thought of life without their Mom.

Short Walk to Daylight never wears out its welcome, and never returns to daylight, even in its valedictory moment.  The reason, of course, is that all the drama is right here: these diverse people forced to contend with one another in the dark.

The issues at play, like their locale, are all part of the "underneath" of the American experience.  The battles over the law, jurisdiction and race reveal how different from one another Americans can sometimes seem; in every regard from philosophy to background. But ultimately, the film also reveals how similar we all are aside from such skin-deep differences.

Many disaster movies thrive on epic and expensive imagery: buildings falling down, skyscrapers on fire, the end of the world, even.  Short Walk to Daylight features good but minimal visual effects and saves the real fireworks for the character interaction.  It's a good call, because a Short Walk to Daylight is actually better than a  big-budget 1996 disaster film with roughly the same premise, called Daylight. There, the focus was on impressive stunts and mock heroics, not people...and what people fear losing.

Yet loss is the real looming threat of any disaster or crisis.

What moves us and motivates us is the terrible fear of losing loved ones, or even our lives. And that's what Short Walk to Daylight never forgets; the human  component of such tragedy.  We all live for those Sunday mornings with our families, but man proposes, and God disposes, right?
at April 15, 2016