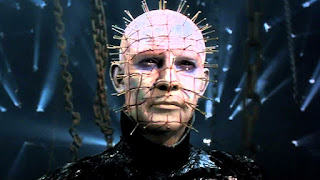 "John, I have enjoyed your recent reviews of the first few Hellraiser movies, and I was wondering: have you seen this possible redesign of Pinhead?

I have sent along an image, and would love to know your thoughts about it." 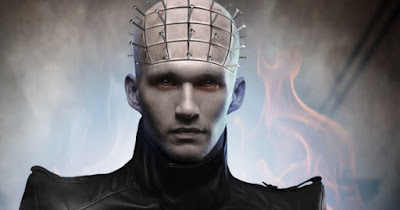 Hi Jason! Thank you for writing.

The first thing I would note regarding this image, simply, is that this is not, to the best of my knowledge, the actual official art work from the production company making Hellraiser: Judgment.

I don't think I've read anything about actually redesigning the character of Pinhead, so I wouldn't want to conclude that the image above is anything other than some cool fan art.

I don't want any rumors starting here, either.  When I checked previous to writing this post, I saw that Pinhead in the new movie looks like this: 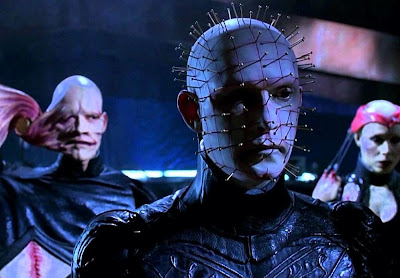 But to tackle your question in more specifics: I am generally of two-minds when it comes to updating iconic screen monsters.

On one hand, it seems silly to fool with success, and with an established image. Pinhead, for example, is iconic for a reason. That unique chemistry has something to do with his physical appearance, and Bradley's performances in the role.

On the other hand, I understand that time passes, and sometimes it becomes necessary to upgrade or update a "creature" for modern audiences. Pinhead has looked the same since 1987. That's nearly thirty years.

Yet Hollywood clearly has seen mixed results in terms of such monster upgrades.

I never really liked the "burn victim" Freddy Krueger of the Nightmare on Elm Street reboot of 2010, for example.

He didn't look like Freddy, like a supernatural avenger. There is something too realistic, and not sinister enough about his updated look, at least for my taste. 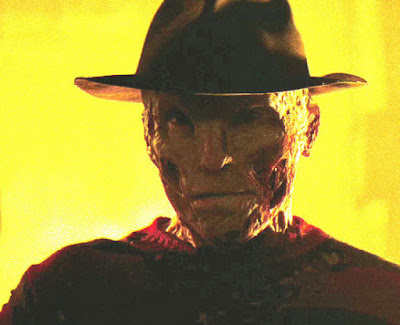 On the other hand, although many fans disliked Rob Zombie's Halloween reboots, I rather liked that the Shape/Michael Myers was depicted as a physical colossus, and that his mask was going through a disintegration process; a process reflected by the character's degrading mental state. 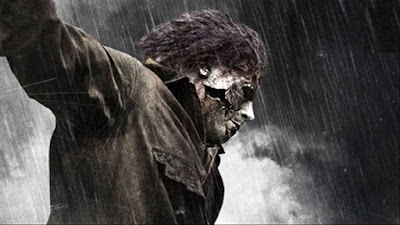 I am hesitant to comment or pass judgment on the image you provided in your e-mail because I don't think Pinhead is actually being re-designed.

I do know that Doug Bradley is not playing the role of Pinhead, sadly. He will be missed. A lot. He brought such gravitas and dignity to the role. He brought that character from supporting "image" to central figure of the franchise.

But on the other hand, the great Heather Langenkamp has been cast in a lead role. That portends...promise.

The last several (half-dozen, actually...) Hellraiser movies have been pretty piss-poor, and I know the director of the new film is aware of this troubling legacy...and wants to change it.  So I kind of doubt his first move, trying to win the fans back would be to re-conceptualize Pinhead so totally.

I could be wrong, I suppose.

Perhaps I read your question wrong, and you're just asking me what I think of a different look for Pinhead?

If I absolutely had to comment on the image at the top of the post, I would say that it makes Pinhead a bit too "kissable" for my taste.

He looks like a super-model, and the pins have been removed from the lower half of his face so that, literally, an actress could kiss him without cutting her face.

Pinhead is already a sex symbol in some countries, but I am not sure that this image is balanced correctly in terms of the sinister/attractive principle.

Still, Pinhead, as a character, really is all about immersion in pleasure and pain. So perhaps this iteration of Pinhead leans more towards the pleasure side of that equation.

An angel to some, a demon to others, right?

I think we can look forward to Pinhead looking the same in the new movie.  I just hope the quality level isn't the same in his next adventure.  If a new start is needed anywhere, it isn't in the look of Pinhead.