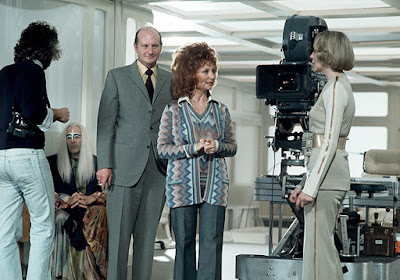 Sadly, the press has today reported the death of Sylvia Anderson (1927 - 2016), producer and long-time creative partner in the colorful and creative TV/film world of Gerry Anderson.

Sylvia Anderson began her career working as a production assistant on such programs as The Adventures of Twizzle (1957-1959), and Torchy the Battery Boy (1960).

She also worked as dialogue director on Supercar (1961-1962) and soon became famous and beloved for voicing Lady Penelope on the classic series Thunderbirds (1965).

Many TV historians also credit Sylvia Anderson with the unique, unforgettable look and style of live-action cult-series UFO (1970) and Space:1999 (1975-1977) Year One.

In 1991, Ms. Anderson penned her autobiography, Yes M'Lady, which chronicled her time as a formative and important force in the Anderson-verse.

Sylvia Anderson's contributions to cult-TV will live on for decades, but her presence -- and her singular voice -- will be much missed.  My deepest condolences go out to her family.

Email ThisBlogThis!Share to TwitterShare to FacebookShare to Pinterest
Labels: 2016, tribute