Ask JKM a Question: Are Any of the New Science Fiction Series Capturing My Attention?

First of all thank you for keeping on posting your reviews on sci fi films and tv (I read your flashback articles as well when I can).

There are currently a lot of new sci fi tv shows which have been released recently (say over the last year) ranging from retreads like The X-Files  to huge amounts of superhero sci fi shows (does every superhero have to wear skin tight costumes?) and some decent space opera (namely The Expanse and Killjoys).

So are any of the new shows really grabbing your attention?

I would have to say my current favourites are The Expanse for its space opera epic-ness and Killjoys for its buddy movie-like qualities and grittiness.  I am sort of enjoying From Dusk till Dawn as well though it is slow and uneven in places.

I look forward to many posts to come..." 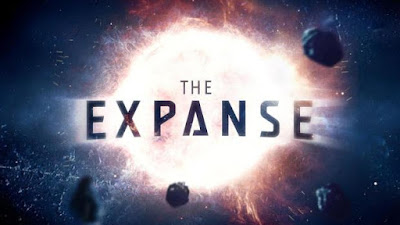 Chris, call me John, and thank you for writing that great question, and for supporting the blog.

I am indeed trying to keep up with as much new genre television as I can. I am hip-deep in returning favorites such as The Walking Dead, Doctor Who, and Game of Thrones, and I agree with you about From Dusk Till Dawn: I enjoy the series, but 'uneven' is a really good descriptor. Some weeks are great and others...not so much. I recently sampled Hemlock Grove too...and found it wasn't really for me.

I recently watched the entire first season of Sense8 and found it occasionally tedious, but also amazingly inventive. It's a series that rewards patience.

Someone just recently asked me about the series iZombie (the subject of a future Ask JKM...), and after watching the first five or so episodes, I am really enjoying it. It is pure, unadulterated Rob Thomas goodness, in the spirit of Veronica Mars. I'll be posting that Ask JKM and my review of the series soon.

I loved The X-Files revival and the first season of The Man in the High Castle, but admit that I am having some difficulty keeping up with all the new superhero TV programming.

I have watched the first two seasons of Arrow (and I love it!), but have not (as yet), sampled Supergirl, or The Flash.  I am a little burned out on superhero productions at this time, so I am giving myself some time before returning to them.

Then, when I'm ready, I'll binge watch the first several seasons of each.

I am very much looking forward to The Expanse. I have read great episode reviews by one of my all-time favorite bloggers, at Musings of a Sci-Fi Fanatic, and I really want to see this show.

The blu ray drops on April 5, so I am looking forward to a binge watch of the first season at that time.  I'll be sure to post about the series here, as I delve into it.

I will confess: I know nothing about Killjoys! I just looked it up and feel that it is something I will have to sample too. I have never even heard of this program.

There's so much out there to catch-up on, and I've let somSe shows go, as they never quite grew to what I hoped they could be.  In this camp, I include Grimm, Sleepy Hollow, Once Upon a Time, and The Originals.

I know I need to catch-up on some of these new series, because 2017 is bringing a whole new crop, from Twin Peaks to a new Star Trek and the next generation of Mystery Science Theater 3000!

Don't forget to ask me your questions at Muirbusiness@yahoo.com
at March 07, 2016