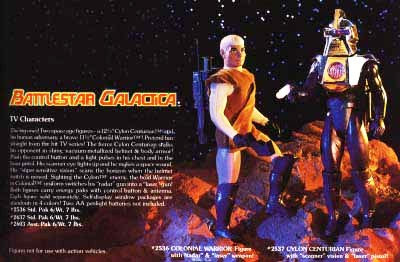 “In the far reaches of space, human colonies were founded by a legendary mother race.  The Colonials are their descendants.  Now, in the seventh millennium of time, these freedom-loving humans try once again for peace with their rivals, the evil, non-human Cylons.  On an errand of peace, the Colonial fleet is treacherously attacked.  The battle lines are drawn again.  Now it’s Colonials against non-human Cylons.  The epic struggle resumes.” 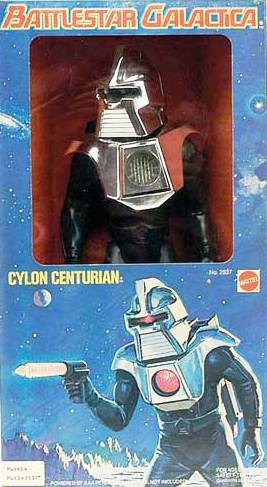 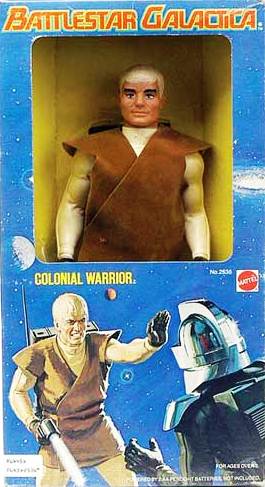 In 1979, the Star Wars (1977) toy and movie craze was still going strong, and Mattel acquired the license to Glen Larson’s new outer space series, Battlestar Galactica (1978 – 1979). It produced many toys for the line, including small toy ships (Vipers, Cylon Raiders, stellar probe, Scarab, etc.), as well as a full line of 3-inch figures.

In addition, however, Mattel manufactured two large, 12-inch figures, the Colonial Warrior and his enemy, The Cylon Centurion.   The figures shared the same body mold, which was actually a re-cast or re-use of a character called Captain Lazer” (“Major Matt Mason’s Friend from Outer Space") in the late 1960s.  This wasn't the first time Mattel had re-purposed old space toys.  Their Space: 1999 Moonbase Alpha set, for instance, featured a "star flash" computer that was also, actually, a Matt Mason toy. 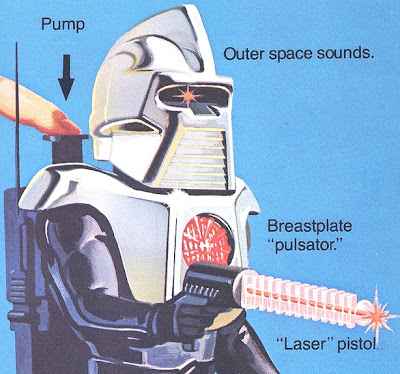 Both BSG action figures came complete with a large black backpack and a “pump” that when pressed would activate the lights on their crystalline-appearing energy weapons, and in the Cylon's case, his chest light or "heart."  These energy weapons came with a variety of strange extensions, of different shapes, and made “star system sounds.”

Additionally, the Cylon Centurion’s tell-tale red “eye” could be moved back and forth in his robotic skull by a horizontal lever on the back of his helmet.

The Colonial Warrior was a blond-haired, elfin-looking fellow garbed in a tan vest, who failed to resemble Apollo or Starbuck to even a slight degree.  In fact, he appeared to have slightly pointed ears and up-swept eyebrows, granting that kind of “fantasy" elf impression.  I remember, when my aunt Patty and Uncle Bob bought me these great toys for my birthday, the first thing I did was paint the Colonial Warrior’s hair brown.

Somewhere along the line, I managed to lose my customized Colonial Warrior.  I still have in my home office the Cylon Centurion, complete with his chrome chest-plate, though his “laser pistol” extensions are all broken or gone at this late date.
at March 16, 2016

Email ThisBlogThis!Share to TwitterShare to FacebookShare to Pinterest
Labels: Action Figures of the Week, Battlestar Galactica, From the Archive, Mattel

"The sea does not belong to despots. Upon its surface men can still exercise unjust laws, fight, tear one another to pieces, and be... 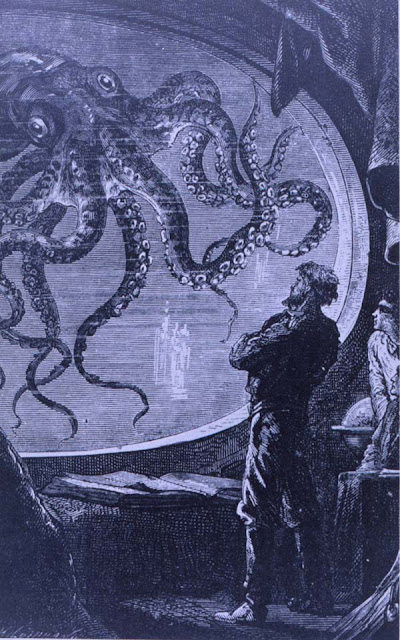