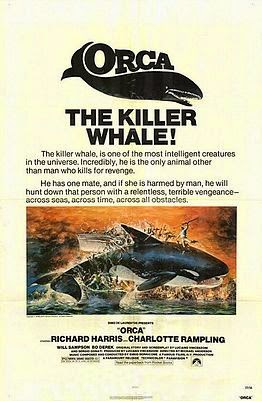 Orca (1977) is an operatic, moving -- and yet deeply silly -- horror movie about what mammals will do for love…and for vengeance.

Although this Dino De Laurentiis film arrived in theaters not long after Jaws (1975) became a worldwide block-buster, it clearly borrows not merely from the Spielberg film, but from Herman Melville’s Moby Dick (1851), a novel about one thing: obsession.

In this case, however, the revenge-mad “Captain Ahab” character is not a man, but rather a mammal, a deeply-wronged killer whale.  In the course of the film the whale avenges his family, killed for no reason by a thoughtless fisherman or hunter.

Accordingly, Orca is a much more thoughtful and compassionate movie in its storytelling than many “killer sea creature” films of the same vintage.  In short, this 1977 film is all about the qualities that a man and a whale could hold in common:

I once (in Horror Films of the 1970s) termed Orca “Death Wish with fins,” and noted that the killer whale plays, essentially, the Charles Bronson role in this film.  I believe that this description still fits.

And yet, for certain, there is more depth in Orca than we get in the vigilante Bronson movies.

In some fashion, Orca concerns more than mere obsession.  It gazes at the strange path by which people -- and other mammals too, apparently -- often become the very thing they hate most by pursuing intemperate passions.

“There is no creature that is a greater friend to man.”

After a cetacean biologist, Dr. Rachel Bedford (Charlotte Rampling) is rescued from a great white shark by a heroic killer whale, she boards the Bumpo, a small fishing ship commanded by an old sea dog, Nolan (Richard Harris).

Bedford is impressed by the orca’s courageous actions, and almost immediately, Nolan attempts to prove his superiority to Bedford by capturing one.

He botches the hunt, however, and harpoons a pregnant female.  The expectant whale is mortally wounded, and she aborts her fetus on the deck of the Bumpo.

Her male partner watches from the sea, and commits to a course of revenge.

Now, no matter where Nolan takes the Bumpo, the vengeful killer whale is certain to follow.

When all the local towns shun Nolan and his ship, he must meet the Orca on the sea for a final reckoning… 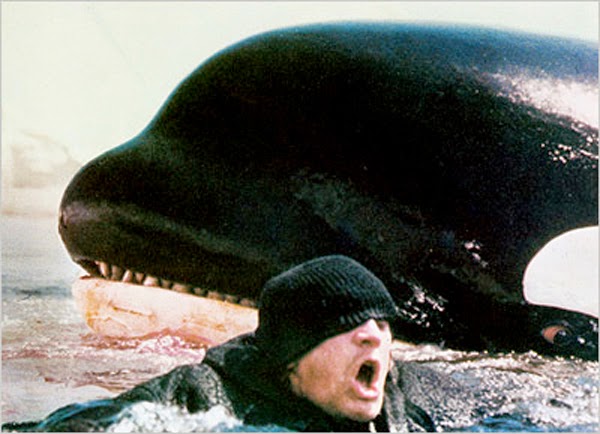 “That animal has a right to be left alone.”

Orca opens with a direct-swipe at Steven Spielberg’s Jaws.

A beautiful woman (Rampling) in the ocean is pursued and stalked by a great white shark, but then an Orca or killer whale arrives to kill it. The Orca, in other words, demonstrates its superiority over the villain of Jaws, and its total domination of the sea.  You think sharks are tough.  Wait till you see these whales!!!!

Intriguingly, Orca progresses much like Jaws in terms of its creative structure.  Jaws deployed a brand of what I termed “information overload,” a total download of information about how dangerous great white sharks can be.

Dr. Bedford in Orca performs the same information overload function, but with a significant twist. She doesn’t explain how dangerous the Orca is (at least not much). Instead, all the information she presents involves how intelligent the killer whale is.

Specifically, Bedford discusses the whale’s “great memory,” its life-long monogamy, and its capacity to “grieve.”

These are crucial aspects of the unfolding revenge narrative.  By wantonly killing the whale’s mate (and for no reason other than his own vanity...), Nolan has made an enemy who will never forget and never give up.

We see this fact played out in one recurring and disturbing visual: that of the whale’s eye.  The camera seems to gaze through the whale’s eye at Nolan, as if the image of this killer is ingrained there permanently.

This revenge drama is granted enhanced depth by Nolan’s own personal background.  His wife and baby were also murdered…by a drunk driver.

And as Nolan comes to realize, he is the whale’s drunk driver, the man who destroyed happiness for another being.  Nolan has become the very individual he hates the most, and that is the reason why, I believe, he grows increasingly isolated and disassociated from reality as the final battle nears.

His mind is split between the reality that he is a monster (like the drunk driver) and the fact that he wants to live…but doesn’t deserve to live.  This "cold" realization about his nature is reflected in the physicality of the climactic duel.  The battle occurs in the icy Arctic sea, as a chill falls over all the characters.

Like the killer whale described by Bedford, man is cursed with a long memory and tremendous intelligence.

This biological "glitch" means that Nolan is capable of making comparisons, and understanding how grievously he has wounded the whale.  He possess the capacity to empathize, and he even asks a priest “can you commit a sin against an animal?”

And the priest answers “sins are really against one’s self.”

That answer suggests that Nolan, in holding his hatred all these years, and then acting rashly rather than thoughtfully, has sinned against the better angels of his nature.  Nolan knows that his days are numbered and yet his heart is no longer entirely in the fight.  A part of him -- a big part -- sympathizes with what the Orca has endured...all because of his own experience with the drunk driver.

Orca is an enjoyable film, but to some extent it is not as thrilling in its final act as it might have been because Nolan is so conflicted a character.  He isn’t really in the fight at the movie’s end, and so the sense of two creatures in diametric opposition simply isn’t present

On one hand, the movie bleeds out suspense.

On the other -- at least from a certain perspective -- Orca goes to a different plateau all together.  It transcends terror becomes a tragedy in which we realize that everyone involved in the conflict is acting out of hatred, and that there are no winners. That's a cerebral reckoning, however, not a visceral one.

This idea seems affirmed by the movie’s ending.  The whale -- the survivor in the conflict -- swims away while a haunting love song plays on the soundtrack.

Has the whale gotten what he wanted?  Is he “whole” now that Nolan is dead?

Or revenge now fulfilled, is the killer whale emptier now than he was before he undertook his campaign of death and destruction?

It’s kind of funny to contemplate this idea, but both Dino De Laurentiis’s King Kong (1976) and Orca (1977) take popular and well-known stories about “monsters” and then layer on recognizable human qualities to their creatures or monsters.  Before the 1970s Kong, the giant ape was never shown love or care by his prospective human bride.  Their relationship wasn't a two-way street, and Kong was just a beast.

And certainly there was no sympathy for the great white shark in Jaws.

On one hand, this anthropomorphizing of animal Goliaths tends to lessen a monster picture’s sense of thrills, but on the other, it makes the movies more affecting on an emotional level.

It takes some kind of twisted genius to gaze at Jaws and wonder what the same movie might be like if only the great white shark were the hero. Yet that’s pretty much the story of Orca.

Unlike many critics -- who pretty much hated this film – I don’t feel that Orca “flounders” around or that it is a cockamamie “fish story.”

On the contrary, it’s a very human tale about how people with very long memories cope with loss, grief and obsession.

Consider that level of intellect a “sea change,” at least in Jaws knock-off territory.
at August 04, 2015