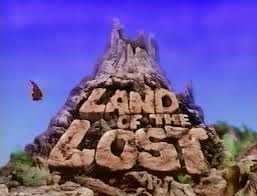 While Tasha continues to go through “the terrible twos” and make a pest out of herself by ruining Annie’s paintings, Stink fakes a sprained ankle so he can get out of helping Kevin repair the tree house roof.

Later, Tasha and Kevin turn the tables on Stink and pretend to be injured… 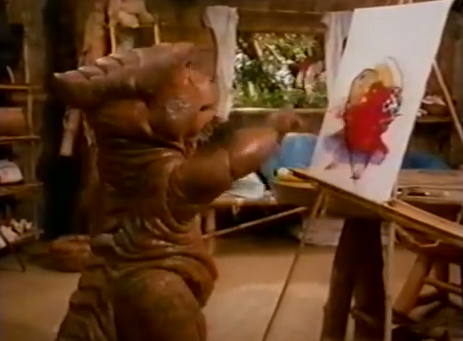 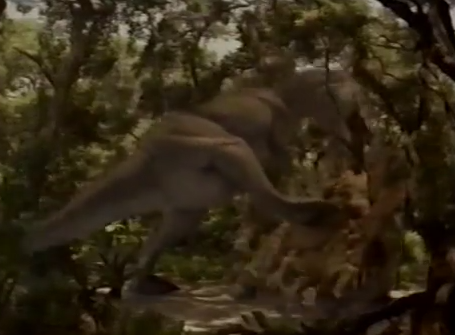 The very last episode of this iteration of Land of the Lost (1992 – 1993), “Misery Loves Company” is a series low-point, which is saying something given the lackluster quality of episodes such as “Cheers.”

This whole half-hour revolves around a cranky baby dinosaur, Tasha, a lazy Paku, Stink, and the series’ most irritating, unlikable character: Kevin Porter.

“Misery Loves Company” features no sense of urgency, no outside menace, and no real narrative direction, even.  Instead -- and as I mentioned last week -- the series plays like a sitcom or situation comedy instead of a fantasy adventure.

Admittedly, the sitcom was a highly popular commercial form when the series aired in the early 1990s, but the uninspiring format is such a disappointment to those who grew up with the adventurous 1970s version of Land of the Lost.  After the thrills of that series, this Land of the Lost feels inconsequential, dominated by directionless, irrelevant material.

It has been many weeks since there was any real sense of danger on the series, and this is despite the fact that the Porters live in the middle of a jungle with dinosaurs, an angry renegade cyborg, Sleestak and other threats.

Despite the locale, and the denizens, the series writers’ have not been able to marshal the resources to present a good or imaginative science fiction or fantasy concept in weeks, or even a compelling story that involves a clash between the Porters and the other inhabitants of the land of the lost.

And so this two-season remake ends rather poorly, having failed to dramatize memorable or important stories, or even boast a leitmotif like the original’s statements about environment and community.

Instead, this Land of the Lost concerns itself with pratfalls and jokes, like the damaged roof spilling water onto Kevin’s head.

Sometimes perspective is everything, and so I would note that if you go into this series expecting a family-oriented situation comedy involving Pakuni and dinosaur hijinks, you likely won’t be disappointed by what you get.

But if you grew up with the Marshalls and the original Land of the Lost, you’re going to find the lack of ideas and the lack of real intelligence in this remake a quality that is virtually impossible to overcome.

This final episode of the series ends without a final appearance by Christa, the most appealing character on the series, and with another cameo appearance of Timothy Bottom’s Mr. Porter.  The series also ends with the Porter family stuck in the land of the lost.

But in this case, being stuck in the land of the lost -- with a car, with a video camera, with a boom box and the other amenities of home -- is hardly a cause for concern, let alone interest.

It’s sad that this series had two full seasons to develop a mythology and universe, but it settled instead for moralistic tripe about drunk driving (“Cheers”) using firearms responsibly (“Make My Day”) and so forth.

The 1990s Land of the Lost thus goes down in the books as a wasted opportunity, and as a pale echo of a far superior originator.

I never got to see the series in its entirety when it aired and so I had always been curious about it.  But now that I have watched every episode, I’m not at all certain it was time well-spent.

If I had to recommend a few episodes, the individual titles to check out would be: “Siren’s Song,” “Kevin vs. The Volcano,” “Flight to Freedom” and “Dream Maker,” which is arguably the best episode in the entire run.

Email ThisBlogThis!Share to TwitterShare to FacebookShare to Pinterest
Labels: Land of the Lost, Land of the Lost 1990s, Saturday Morning Cult-TV Blogging, Sid and Marty Krofft