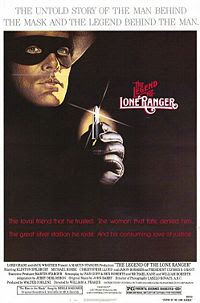 "Return with us now to those thrilling days of yesteryear... The Lone Ranger rides again!"

This went on every weekday for a long time...and boy...I was in kiddie heaven. I remember some days begging my Mother to take me home from Brookdale Park so I could get home in time to see these TV programs!

Anyway, Clayton Moore portrayed the heroic Lone Ranger in the 1950s series (along with John Hart, for two years), and I admired the Lone Ranger as a child (and now, as a man) because of his moral creed. He didn't drink or smoke. Not only did he speak beautifully (never indulging in slang or jargon), but he believed that "all men are created equal and that everyone has within himself the power to make this a better world." Most importantly, the Lone Ranger never shot to kill.

Despite my love for the 1950s Lone Ranger TV series (and I even owned a complete set of Gabriel's 1973 10-inch Lone Ranger figures...), I would have certainly welcomed, by 1981, a modern take on the classic material; just as I had welcomed with open arms the updated Superman: The Movie (1978).

But with The Legend of The Lone Ranger (1981), a notorious box office bomb, something went wrong.

I watched The Legend of the Lone Ranger again last week, for the first time in years, and was shocked anew at just how bad this film is. In fact, I was unpleasantly reminded of Tarzan: The Ape Man another 1981 film which failed to do justice to an iconic hero. At least Tarzan: The Ape Man has Bo Derek starring (and disrobing...) in it, and boasts a high-degree of camp value. The Legend of the Lone Ranger is just plodding.

In the Old West (Texas, 1854), young John Reid sees his parents brutally murdered by bandits and is taken in by friendly Indians to live as one of the natives. Reid's "blood brother" is Tonto, and at this early age, Reid decides irrevocably to follow "the trail of justice." Soon, however, he is removed from his Indian life by his older brother, Dan, a ranger who sends John back East to become an attorney. 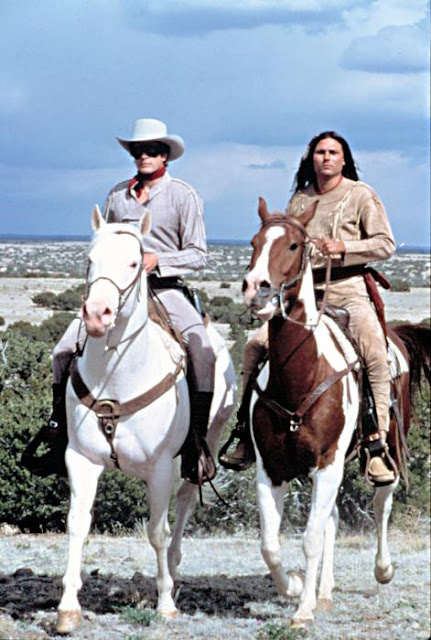 Several years later, a grown John (Klinton Spilsbury) returns to the wild west hoping to make it a terrain where justice prevails, but in local "Del Rio," (a town in trouble, Merle Haggard tells us...) he finds that much of the territory is already in thrall to the power-hungry, psychotic Butch Cavendish (Christopher Lloyd), a warlord who seeks to kidnap President Ulysses S. Grant (Jason Robards).

Before long, John, his brother Dan and a team of rangers are led into a Cavendish trap by a traitor in the ranger ranks and -- after a brutal gun fight -- left for dead.

Only John survives the massacre. He is nursed back to health by a now-adult Tonto (who happened by the crime scene at just the right moment...) and soon launches his quest for justice. But first, John must "dig a grave for John Reid" and become The Lone Ranger; a masked man who rides a white steed named Silver, and who uses silver bullets in combat.

The Legend of the Lone Ranger's first and most egregious failing is that it doesn't seem to know its audience (which, if you ask me, would include generations of "grown up" boys and girls who loved the TV show). By this, I mean that Legend of the Lone Ranger is the ugliest, gauziest, dustiest-looking western since Michael Cimino's Heaven's Gate (1980).

It's not just that the movie is unpleasant to watch...it's actually unpleasant to look at. You can hardly make out faces, the film is so gritty and soiled-looking. I would argue that this is precisely the wrong visual for any Lone Ranger production. We should be inspired by the beauty of the West, by those gorgeous wide open skies and natural landscapes; just as the Lone Ranger is himself inspired by the promise of America. I mean, I know dark things happen in the Lone Ranger's origin, but no one in their right mind would live in a Wild West that looked like this, forever inside its own whirling Dust Bowl.' 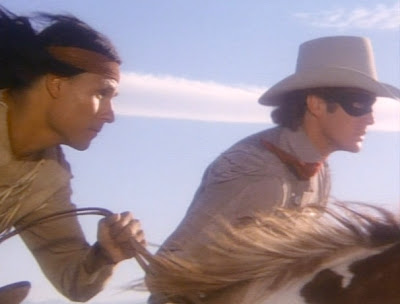 Secondly, this is a film that, in the first few minutes, depicts innocent Mrs. Reid (John's mother) dragged behind a horse by bandits, and then shot and killed at point-blank range. Later, the film doesn't cut away when two bandits are executed by Cavendish, and we see the bloody impact wounds blossom on their chests. I'm no prude, but the Lone Ranger in the past was a franchise that didn't exploit graphic violence. The Lone Ranger himself never killed his enemies; and furthermore lived by a code of justice that he applied to all: criminals and honest citizens alike. It's a mistake, I submit, given the history of the franchise, to revel in bloody demises like those depicted here. It seems antithetical to what the Lone Ranger is all about.

I'd also state that The Legend of the Lone Ranger doesn't know its audience because it makes several basic mistakes in franchise information and background. For instance, this film transforms heroic John Reid into a rookie attorney (!) not an experienced ranger, when he is involved in the massacre. It also establishes that he is a terrible shot, one whose skill is miraculously improved only when Tonto gives him silver bullets. In most incarnations of the Lone Ranger, Reid is a talented marksman and ranger before the events that change his life. Frankly, that origin makes more sense. Silver bullets aren't magic in and of themselves (though I guess they can kill werewolves...). I just don't see how silver bullets make a person's aim more true, even if, according to Tonto, "silver is pure."

The Legend of the Lone Ranger's second, and perhaps most catastrophic failing is that it is dull beyond  conventional forms of measurement. This is an action movie that moves at a snail's pace. It takes thirty-eight long minutes just to get to the ranger massacre in the gully. It takes to forty-eight minutes to introduce Silver. Key scenes are notably and irrevocably dull. For instance, the moment when Reid tames Silver is extended relentlessly by slow motion photography (think of Tarzan's wrestling match with a boa in Tarzan the Ape Man), and becomes almost laughable in its duration. I'm a long-time admirer of composer John Barry, but his lugubrious, ponderous score only contributes to the sense that this movie is a dead weight around your shoulders...never ending, ugly, and with nothing of significance occurring.

"Thrilling days of yesteryear?" You won't find them here...

The film's final flaw is simple: basic incompetence. Through the entire film, Klinton Salisbury's voice is badly dubbed by James Keach, and you can tell. Worse, in key moments, (particularly the horse whispering moment), it is obvious that Silver is played by at least two very different horses. You know a movie is in trouble when you have the time to notice that the lead horse is being stunt-doubled...

The only time this movie comes to life is when that inspiring William Tell Overture is dragged out of mothballs and the pulse quickens.