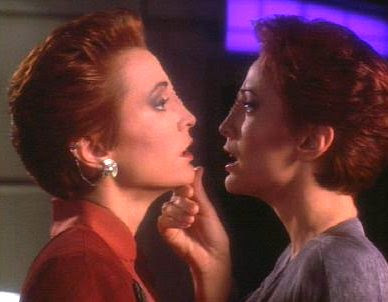 "The idea to me of a mirror universe is that you begin with exactly the same archetypes in place, the same responses. It’s just that one took a left turn and one took a right turn. So it’s a real mirror image, and Kira’s warrior spirit and desire to fight for her people became skewed. It’s still there. It’s still a warrior spirit, and yet it’s with a complete selfishness with the Intendant. And it’s all about her, the Intendant. So everything was inward instead of outward. I felt like I got to know Kira better by playing the Intendant."