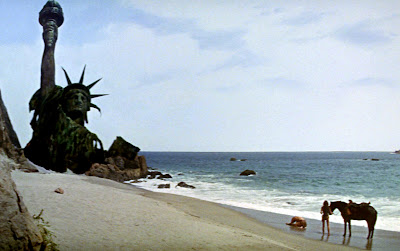 “Here is my list in a top ten countdown:

10. Land Of The Lost (2009) because the humor worked for me completely with the triumphant return from Altrusia of Rick Marshall and Holly. I thoroughly enjoyed Marshall on the Today Show with Matt Lauer and Marshall's book. LOL.

9. Walt Disney's 20,000 Leagues Under The Sea (1954) because the ending is tragic to see the loss of Nemo, his gallant crew and the technological marvel the Nautilus.

8. Capricorn One (1978) because it is a film that has an ending that you wanted to see continue to witness the cover-up scandal explode into the media. This film would go on a list of the top ten films that needed another act to resolve all that we wanted to see. For the tiny minority that think the Moon landings were faked, this Mars mission with Apollo era technology fills the void, but only in fiction.

6. Alien (1979) because Ripley and Jones[cat] must destruct the Nostromo and little do we know that the alien is on-board the Narcissus lifeboat.

5. Back To The Future (1985) because it was a happy ending to see that time-travel actually brought about positive change for the McFly family.

4. Beneath The Planet Of The Apes (1970) because we see all hope is lost with the death of Nova, Brent and Taylor's last act of ending the world with the Alpha-Omega bomb seems as shocking as the Statue of Liberty ending of the first film.

3. Star Trek II: Wrath of Khan (1982) because the death of Spock to save the "many" was both logical and truly brave. In 1982, the film was so painful to watch because we thought it was permanent. Spock was dead.

2. Silent Running (1972) Lowell commits the ultimate sacrifice to punish himself for his sin of murders and ultimately to protect the forest that he loved so much.

1. Planet of The Apes (1968) for all the reasons that you stated John. Seeing this film in the early '70s as a very young boy the Statue of Liberty shocked us all. Earth!!!

I appreciate SGB’s list, especially because it recognizes Beneath the Planet of the Apes (1970), a film with one of the most balls-to-walls, uncompromising endings in motion picture history.  It cements the Apes tradition of ending on a shattering, surprising note (a tradition continued with Escape), and thus absolutely deserves a nod here, in my opinion.

The end of Silent Running is also one to remember: simultaneously haunting, lonely, and beautiful, with a dash  of hope regarding that last forest, sailing into the unknown.

I recently watched Capricorn One (1978) and I’m with SGB on the fact that the ending really left the audience wanting more, which may be the perfect way to end a film. You're hooked!

Don’t forget to send me your list at Muirbusiness@yahoo.com.
at July 16, 2013