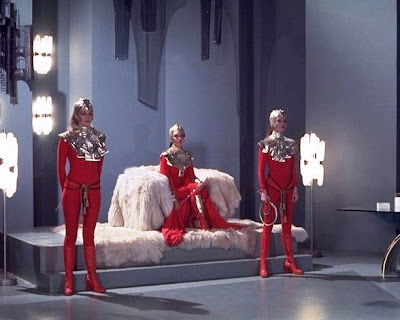 A matriarchy is a female-dominated society, and the idea of such a culture has often been popular in cult television history.

In some ways, this obsession with matriarchy seems a little insulting today.  Beloved TV characters face the horror of realizing that WOMEN ARE IN CHARGE!  Why, it's terrifying...

Today, of course, that fear is just sexist, and we have seen many great female leaders around the globe.  Thus far, no men have been rounded up and taken to internment camps, or made slaves to diabolical "mistresses" of totalitarian matriarchies. 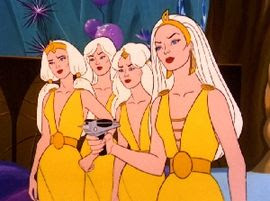 The Star Trek franchise has featured matriarchies on more than one occasion. In the original series third season premiere, "Spock's Brain," the Enterprise encounters the "Eyemorgs," the women rulers of planet of Sigma Draconis VI.

In The Animated Series (1973 - 1974), The Enterprise encountered another matriarchy, one bound and determined to drain the life-force of Captain Kirk, Mr. Spock, and the entire male contingent of the Enterprise crew.  Lt. Uhura (Nichelle Nichols) took command of the starship, and fought back against these sirens. 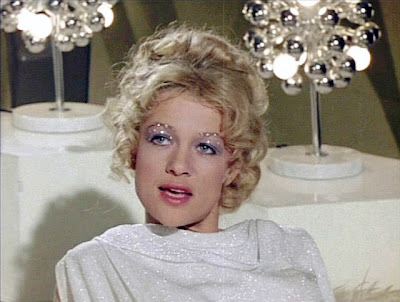 A short-lived German/British series created by Eric Paice called Star Maidens (1975) involves the planet Medusa adrift in space as its inhabitants dwell in an underground metropolis.  There, women rule, and men serve as domestic servants.  Two male slaves, Shem (Gareth Thomas) and Adam (Pierre Brice) decide they are tired of being taken for granted (“who takes care of the kids?!”) and make a beeline for nearby Earth.

Their female masters pursue, but are troubled by the fact that Earth is ruled by men (!).  Indeed, the Medusan mistresses claim such a set-up is in “violation of all common sense.”

Considering the Earth a “great disappointment,” the Medusan Matriarchy sets out to retrieve Shem and Adam.  If they fail, a new, illegal “men’s liberation movement” could take hold on Medusa, overturning the apple cart. 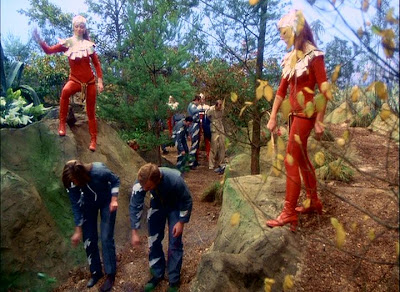 Entra from Space: 1999: "Devil's Planet" (1976) is another female-dominated socieety.  In this second season episode of Gerry Anderson’s Space: 1999, Commander Koenig (Martin Landau) is captured by Elizia (Hildegard Neil), the warden, governor and absolute ruler of the prison colony of Entra.  The prisoners incarcerated there are all men -- political dissidents who spoke against female rule, apparently -- and are now guarded by cat-suited Amazon women who viciously wield whips.

The prisoners' only opportunity to escape this hellish life is to survive sadistic Elizia's vicious game, "The Hunt."  If a prisoner does survive being hunted by Elizia and her women on the inhospitable moon’s forest surface -- being both outnumbered and out-equipped -- he can be transported back to the home world, his sentence is commuted.

The only problem: a plague has decimated the home world, Ellna, killing all living beings.  So when Elizia beams the victorious political dissidents back home, she's actually issuing the troublesome men a death sentence. 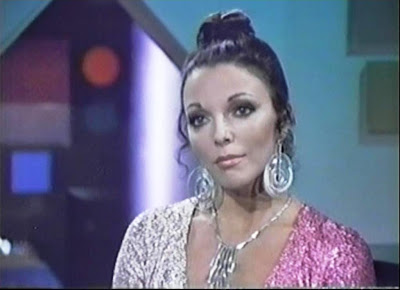 In "Turnabout," an episode of the short-lived TV series The Fantastic Journey (1977) -- set in the Bermuda Triangle --  Queen Hayalana (Joan Collins) finally tires of her brutish husband and his stupid men, and with the help of a powerful computer called "The Complex," zaps all the males of the province away to a null zone, or pocket universe.

To convince these visiting men to remain docile and cooperative, this cold-hearted queen then poisons their food, and tells the men they will only receive the antidote only if they comply with her wishes.

Hayalana’s plans come crashing down however, when none of the women in the province are capable of controlling “The Complex,” a computer built by…you guessed it, a man. 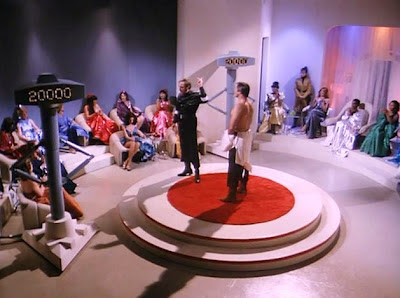 In Buck Rogers in the 25th Century's (1979 - 1981) "Planet of the Amazon Women," Buck (Gil Gerard) is captured by gorgeous slave traders of the planet Xantia and auctioned off to the highest bidder.  You see, all the men of Xantia have either been killed in one of their incessant wars, or are being held prisoner by the planet’s enemy: the Ruathans.  Thus the women of Xantia need some *ahem* company, not to mention some men to do all the physical labor. 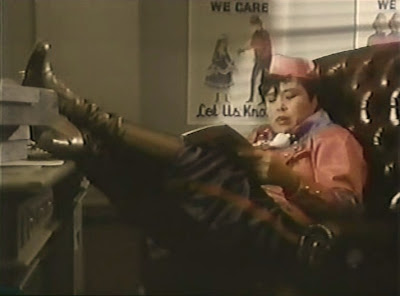 Otherworld's tale "I am Woman, Hear Me Roar"  involves a militantly female society that rules the roost in the province of “Adore,” founded by a female Zone Trooper commandment, Livia.

The men in “Adore” do not even know how to read, and the "gender stratification" laws discourage marriage.  A “gender patrol” walks the streets, maintaining order, and girls ogle slave men in the popular magazine, “Available Hunk.”

And, of course, there’s the Gender Arcade, the marketplace where men are greased up, stripped down, and sold to the highest bidder.

When the patriarch of the Sterling family, Hal (Sam Groom), objects to the status of males as second-class citizens, a woman in power reminds him to: “keep in mind that this is a conservative part of town and will resist compromise.”  When Hal’s wife, June (Gretchen Corbett) sticks up for him, the same women sneers: “Oh…I understand…you’re progressives.” 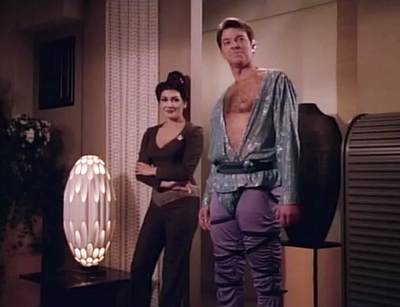 In "Angel One," a first season episode of Star Trek: The Next Generation, the Enterprise D visits the Matriarchy of “Angel One” in hopes of finding out if survivors of a freighter, the Odin, landed there.  They find out that a group of men did survive, and are making trouble for the female leadership.

Mistress Baeta (Karen Montgomery) – or “the elected one” – pronounces the death sentence for the survivors of the Odin and any women unwise enough to attempt to alter the peace of Angel One’s female-dominated society.   Commander Riker (Jonathan Frakes) steps in to argue against the death penalty.  Ultimately, he is persuasive...perhaps because Mistress Baeta still remembers the space stud in his colorful, open-chest blouse and earrings…

Even by the 1990s, science fiction television was still trotting out this old (and now ridiculous trope).  Sliders (1995 - 1999) featured an episode titled "The Weaker Sex" in 1995, wherein Quinn, Arturo, Wade and Rembrandt slide into a parallel Earth that is a matriarchy.

Still, this episode could prove prophetic since it features...President Hillary Clinton (Teresa Barnwell).
at July 29, 2013