Comic-Book Review: To Hell You Ride #5 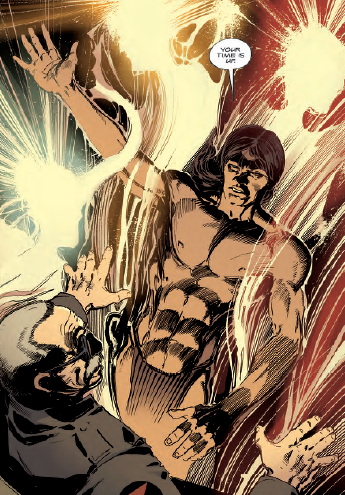 The final issue of To Hell You Ride -- the Dark Horse horror comic-book from Lance Henriksen, Joe Maddrey, and Tom Mandrake which premiered last November -- concludes the five-part saga in an emotionally resonant, satisfying, and blazing fashion.

All the various loose strands of the plot are picked-up, weaved together, and certainly, there is a surprise or two regarding how things end.  I won't linger on a synopsis at this point, especially since this is the last chapter.  Part of the joy of experiencing this valedictory issue involves your personal reckoning of the surprising twists and turns.

In terms of the denouement -- generally speaking -- the final pages of the story play fair with our expectations, and are entirely consistent with what readers already know of the major characters and their world.  Simultaneously, the last few pages offer a kind of psychic (and electric) shift in perception that blows the whole thing wide open and allows us to perceive the narrative's events in a new light.

Most dramatically, however, To Hell You Ride ends with an awareness that the horror genre -- at its zenith of quality -- functions best in 21st century society as a morality play. 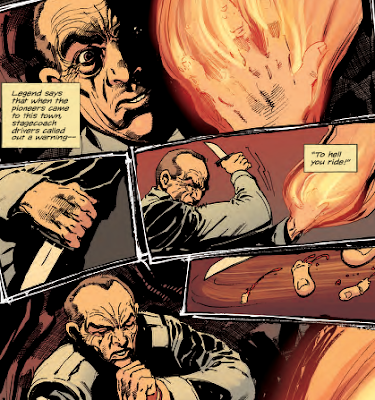 For our purposes today, the morality play isn't necessarily tied to any specific religion anymore, but rather serves as a societal allegory which concerns a protagonist making a choice that prompts him (or her) -- and by extension the audience -- to select the good life over an evil or corrupt one.

If you follow the opening frames of the comic-book in Issue #1 ("White Man's Guilt") with the closing frames of the book in Issue #5, there is a book-end quality to the saga, as visuals repeat in familiar form, though with new participants taking on prominence in the frame.  This repetition of imagery suggests something cyclical, and the notion that that the authors -- having told their tale -- now step off the stage and leave matters to us, the readers.  Will we heed the lessons of To Hell You Ride, or continue on in the same vein we have been?

Those lessons largely concern three deadly sins: greed, gluttony, and wrath.  These aren't just sins, they seem to be everyday aspects of our national culture and dialogue.

And those qualities too are an aspect of the historical morality play and its structure.  In particular, morality plays have long featured characters who are personifications of vice itself.  To Hell You Ride's rogue gallery of villains fits that description rather well.  The deceased Mayor Cubby Boyers (who we met in Issue #2, "The Alchemy of Snow") is avaricious to the point of gluttony, especially regarding material wealth.  His grotesque physicality itself is an embodiment of that gluttony.

Meanwhile, the central villain of the later issues, General Blackwash, personifies wrath, or uncontrolled, inordinate rage, violence, and hatred.  He is hate personified and unloosed on the Earth, willing to destroy everything in his path simply because ruin and carnage are always the end result of unrestrained, unthinking hate.

Even the general population of Shipps' mountain town is personified throughout the comics series in terms of its unsavory greed and gluttony.  These characteristics account, in large part, for the apparent curse that vexes the population.  These people are so inordinately greedy, selfish, and materialistic that they can't even detect how disrespectful they are to Mother Nature, to the land they exploit and use for their wicked pleasure.

Impressively, the final issue of To Hell You Ride suggests sacrifice as a counter-point to gluttony and avarice, and duty and responsibility (in Shipps) as the antidote to Blackburn's tornado of swirling hate.  The final image -- which suggests the cyclical, repeating nature of life (and which plays into the comic's non-linear time aspect) -- is explicitly about new shepherds being created after the catastrophe in Colorado, ones who act as both heralds and custodians for the land. 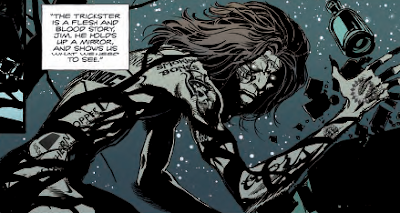 From the opening frames of Issue #5, To Hell You Ride drives the reader towards this final apotheosis of knowledge and wisdom.  The first step in that driving push is pulling together all the themes of previous issues.

First, we get an explanation of the series title itself ("to hell you ride" was once a warning from stage coach drivers), and then we move into one of the loveliest passages in the entire series, one that explains, essentially, quantum physics (or non-linear) time in the most romantic and lyrical, human terms imaginable.

The passage starts: "Imagine that everyone you ever loved and anyone you ever will love..and everyone who helped you on your way...are with you now."

I don't want to spoil the punch-line of that narration, but it's especially beautiful, at least for agnostics like me, who don't feel the need to forsake spirituality in toto simply because we don't belong to the club of Christians, Mormons, Muslims, and so on.

I see the explanation of the series title and then this romantic explanation of time and reality itself as clear markers in the narrative that the adventure is coming to an end, and a reminder of the thematic ground the four preceding issues covered.

Another quote -- "once a curse is set in motion it will play out in its own way, in its own time" -- also harks back to earlier issues,  and reminds us of the (apparent) nature of the threat that has unloosed men like Blackwash on the land.  To Hell You Ride Issue #5 works so well, however, because it plays with some of the definitions in that above passage.  It does so -- like the curse -- in its own way and in its own time.  I would say the authors of this comic-book internalized that message perfectly.  They reveal one secret, one revelation at a time, and never before we, the audience, are ready to receive it.

The final issue also features a character called "The Trickster," pictured above (and on the cover), and he is a personality who may be more at home in a hero's journey quest than in a morality play.  But make no mistake, To Hell You Ride is that animal as well, only not in the obvious terms we have come to expect from the latest Hollywood blockbuster.

The mythological Trickster archetype in literature can be either positive or negative in nature, but it usually appears at a moment of high tension, and can shift the narrative in one direction or another (often unexpectedly).

That's the very role of the character here, and it's actually appropriate that it appears so late in the drama (in literally, the last act), because the final twist in the tale -- while not a gimmick -- is about a trick of the mind, a trick of perception.   Not long after the Trickster appears, a crucial change in viewpoint occurs in the story. This viewpoint shift is so effective (and startling) that it feels like scales falling from the eyes.

For me, To Hell You Ride #5 -- with all its call-backs both in imagery and language to previous issues, --threads the difficult needle of any story's final act.  It feels true and believable even while it achieves the honor of being described as "mind blowing."

I suspect that when readers (and prospective filmmakers) go back and read To Hell You Ride in toto, they will want to contextualize his comic in three ways.  First, as a deliberate revitalizing of some old tropes about Indian curses that makes them feel fresh again, and secondly, for functioning as a morality play of today, for the moment of right now.  The third aspect would be, of course, an understanding of the true nature of time and reality.

Check out To Hell You Ride, issue #5, here, and let me know what you think when you're all done, when you've taken the entire journey. As before, I recommend reading all the issues together to get the full sweep of the narrative and to pick-up all the various and often deeply-buried clues. 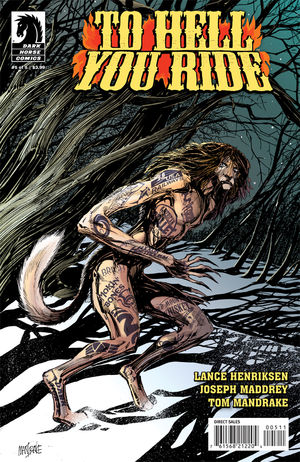