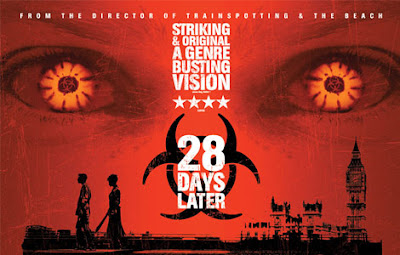 "Any chance of you doing a review of Danny Boyle's '28 Days Later'? Personally I think it's a brilliantly scary movie with a strong political philosophy, and with a few scenes in particular that elevate it far above just about any other 'zombie' movie since 2000.

A lot of critics and friends of mine are quick to dismiss the final third of the film in a similar manner to the way people dismiss the end of 'Sunshine'. For me though, Jim 'becoming' a zombie and killing all of the soldiers due to his anger is precisely what the movie is about; as Henry says around the dinner table, it's just people killing people, same as it always was. The chimps in the opening scene were infected with 'rage', and it is rage that drives Jim to do what he does, infection or no infection. In the end, he's indistinguishable from an infected as evidenced by Hannah clubbing him over the head.

There are a few shoddy actors (Hannah in particular is absolutely dire) but overall I can't think of many films in the last 15 years that succeed both intellectually and as pure horror to quite the same extent. I would love to hear your thoughts." 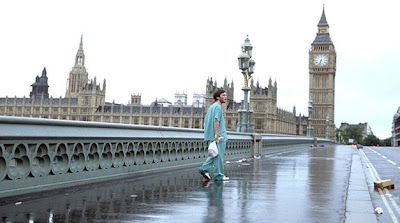 Hi Jez, I have been a big admirer of Danyy Boyle's films -- and especially 28 Days Later -- for many years now.  I feel that all of your thoughts on the film ring true, and most of the criticisms against the film tend by fannish complaints about fast-moving zombies, or some such thing.

But, I will indeed review the film -- tomorrow morning, at 6:00 am -- and present my full thoughts about it. Thanks for a great question, and for reminding me of a great film.