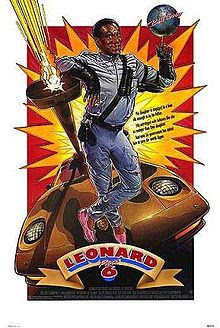 A reader named Eric writes: “Have you ever watched the sci-fi movie Leonard Part 6 (1987) starring Bill Cosby, and if so, what did you think of it?

This movie receives no love or no attention from anyone, but is actually hysterically funny. I would love to read your thoughts regarding it.”

Wow Eric, I have not thought about Leonard Part 6 in probably two decades (thus proving your point that it gets little attention, I suppose).

I will admit, I actually saw it in the theater on release. In fact, I went to the Royal Theater in Bloomfield, New Jersey with my best friend in high-school, Bob, to see it.  I don’t know why we picked it.  But we also saw Godzilla 1985, Ghoulies (1985), and Nightflyers (1987) there.  The Royal was the place for crappy movies in the late 1980s. (Although the place for really crappy movies in my neighborhood was the Wellmont; the theater that showed Zombie Island Massacre [1984]).

As I recall, Leonard Part 6 received horrible reviews, and even Bill Cosby disowned it, warning audiences not to go see it.  The film currently resides in the bottom 100 at IMDB, but frankly, that doesn’t mean anything significant.  Half the films on that list are there because they played on Mystery Science Theater 3000, and that’s all.  That said, Die Hard Dracula (1998) is number two on the bottom list and it really is one of the worst films I ever saw.

My own recollection is that Bob and I laughed a lot in Leonard Part 6, however.  Whether we laughed at the film because it was funny or bad, I’m not really certain at this juncture.  I was seventeen, I guess, when I saw the film, and so I probably dug the sophomoric humor.  I don’t know.

If you’re asking for a review…er, well, the movie is available on Amazon Instant Video so it is easy enough to see.   I’ll make a deal with you: If ten other readers write in the comments section below this post and support your desire for a Leonard Part 6 review, I’ll watch the movie and write the review in the next few weeks.  But nobody better ask me to review Die Hard Dracula. I already penned one for Horror Films of the 1990s, if anyone is interested...

Don’t forget to ask me your questions at Muirbusiness@yahoo.com.