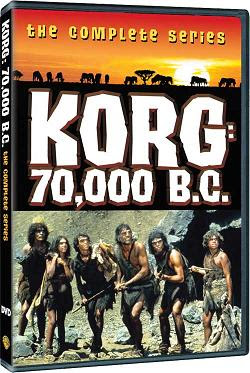 This Saturday morning live-action adventure/fantasy series from Hanna-Barbera was created by the late Fred Freiberger and ran for one season on ABC.  The series follows the adventures of a Neanderthal family headed by the hunter Korg (Jim Malinda). The others in his tribe included his wife, Mara (Naomi Pollack), hunter Bok (Bill Ewing), daughter Ree (Janelle Pransky) and sons Tane (Christopher Man) and Tor (Charles Morteo).

Burgess Meredith served as series narrator, and at the climax of each story, his gravelly voice gently assured viewers that the preceding tale was "based on assumptions and theories" based on Neanderthal "artifacts" discovered by modern man, since the Neanderthals left nothing else by which to learn about them.

Each episode of this half-hour series usually featured a relatively simple story, and one that seemed to concern family values. Although it is shocking to see prehistoric cave dwellers speaking perfect English (!) in the series, it nonetheless had its share of unique installments. 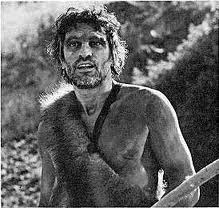 In one, a wounded Neanderthal from the nearby "River People" found himself going blind after a bad fall. He thus abducted Korg's youngest son, Tor, to lead him home. Korg and Bok followed in hot pursuit to save the boy, but the conflict was resolved without conflict or violence, a staple of Saturday morning television in the 1970s. Understanding was forged and the episode ended on a happy note with the hunter's sight restored as Korg and clan escorted him home.

Another Korg episode, written by Dick Robbins, was shot at Vasquez Rocks, the location of so many Star Trek episodes, including "Arena." In this tale, Korg and his friends faced a "struggle for survival," according to the narrator, "a constant" back in that time.

In particular, Korg and Bok hunt a very fake-looking black bear, and it badly wounds Bok. This causes the great warrior to lose his sense of courage, a sort of prehistoric case of PTSD, so Korg concocts a vision from their God "The Great Unseen One," to restore Bok's strength.

In particular, he must drink the blood of the bear that injured him. The episode culminates with a weird ritual as the triumphant Bok and Korg dance around with the bear's severed head. That sounds awfully un-PC for kid's television, but there you have it.

The subtext of this episode is also fascinating, since Korg, in the coda, comes clean to wife Mara that he invented the vision so as to help his friend. One is left with the notion that this kind of trickery may indeed be the way that man began to conceive "religion."  But it’s oddly subversive, again, for a Saturday morning program.

Although there are occasionally some nice shots of wildlife in the program, Korg 70,000 BC's biggest deficit is that it looks to be filmed in contemporary and familiar Southern California, not a dangerous prehistoric landscape.

That said, the caveman make-up holds up pretty well, and the stories are simple ones, simply told, but relatively engaging if you can get over the sight of Neanderthals speaking Pidgein English. The non-violence is a bit hard to swallow too, especially since these people had not even yet "discovered" the missionary position. So think of this as Quest for Fire…rated G, on Saturday mornings.

Korg 70,000 BC is worth remembering not just because it's a very different kind of Saturday morning TV show, but because it did spawn a merchandising blitz during its day. I remember playing the Korg board game, and there was also a Korg lunchbox available, if I remember correctly. 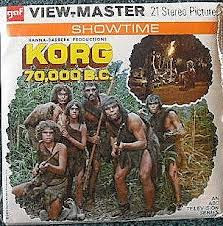 As a kid I watched Korg religiously, though I was always disappointed that the cavemen didn't fight dinosaurs. Which is probably why I liked Land of the Lost better, even if Korg 70,000 BC took pains to present its material as accurately as possible for kid's television
at December 08, 2012