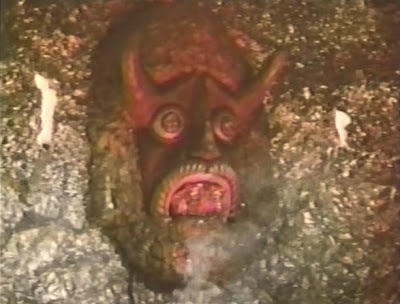 We all like to believe that we are civilized, law-abiding people, but in historical terms, it wasn't that long ago that mankind engaged in some pretty bloody religious practices, particularly human sacrifice.
Human sacrifice might best be described as ritual killings, designed explicitly to appease the Gods, spirits, or the dead.  Human sacrifice might be practiced in the form of burning, hanging, or the removing of the heart.
The bloody act of human sacrifice -- treated as murder by secular law in contemporary times -- has appeared commonly throughout cult television history in a variety of programs and episodes, usually as the "threat" or "danger" of the week.
In Dr. Who's "The Aztecs" (1964), one of the best serials of the William Hartnell era, the TARDIS lands in 15th century Mexico and school-teacher Barbara (Jacqueline Hill) is mistaken for the Aztec goddess Yetaxa.  Barbara encourages this mistake so as to put to an end the barbaric Aztec practice of human sacrifice.
The Doctor (Hartnell) objects to Barbara's interference on the grounds that the time-line should not be altered, but the serial actually gets at another, far more interesting idea.  The Aztecs are from another time, another tradition, and another culture, and so one must ask if it is right to judge their religious practices by modern, Western, Christian standards.  Of course, we consider human sacrifice barbaric today.  But in five hundred years, how will our descendants view capital punishment? Or war?
If a future visitor came back in time and tried to stop war or capital punishment in 2012, what would that action do to our culture in the here and now?  Would it short-cut our evolution?
Kolchak: The Night Stalker's "Legacy of Terror" (1975) provided another take on Aztec human sacrifice.  Here, a murderer stole the still-beating hearts of unsuspecting victims in an attempt to revive the Aztec God, Queztlcoatl, in the flesh.  Eric Estrada played one of the victims.
Sometimes, the human sacrifice trope is utilized as a kind of warning that what appears to be too good to be true is, in fact, too good to be true.  In Lost in Space's (1965) "His Majesty Smith," Dr. Smith (Jonathan Harris) is treated like a king before he is to be sacrificed by an alien race.  His royal treatment -- a last supper, as it were -- is only the prelude to untimely death.
Smallville's (2001 - 2011) tenth season episode "Harvest" followed much along the same thematic lines.  Lois (Erica Durance) and Clark (Tom Welling) encounter a quaint, Amish-like small town in the woods of Kansas, one where families eat home-cooked meals together at the dining room table, boast time away from the business of modern life..but then by darkest night sacrifice strangers on pyres to make certain that their crops continue to grow plentifully.  The point here seemed to be that the "traditions" of the past may seem appealing on first blush, but sometimes there are real drawbacks.  By comparison, our more evolved modern life -- even with the never-ending call of tweets, e-mails and around-the-clock work -- is better.  You might want to romanticize the "quaint" past, but it wasn't all sunshine and roses.
In some extraordinary cases, the human sacrifice cliche has also been utilized to showcase the foolishness and danger of religious practices.  In The Fantastic Journey's "An Act of Love" (1977) the people of a unique province in the Bermuda Triangle sacrifices married men (on their honeymoons, no less...) to the volcano God Betticus, in hopes he will not erupt and destroy their village.
At the end of the episode, a 20th century pacifist and intellectual, Jonathan Willaway (Roddy McDowall), points out, quite astutely,  that you can't make deals with volcanoes, and that the intelligent people should leave dangerous superstition and religion behind.  "An Act of Love" proved a bold  indictment of irrational religious belief, particularly the idea that God wants you to kill another human for some cause actually of your own distinctly human agenda.
In especially satirical settings, such as The X-Files fourth season entry "Sanguinarium," human sacrifice is seen as a run-of-the-mill, even expected aspect of out-of-control contemporary capitalism.  You want success in business?  You want to be rich?  You want a nice house?  Well, you better appease the Gods with a good old fashioned human sacrifice.   Human sacrifice is thus a shortcut to upward mobility.
The problem is that Gods apparently require lots of appeasing...and that means lots of spilled blood.
at February 20, 2012